A SECOND national lockdown could be possible if Brits don’t obey the new rule of six, the PM hinted this afternoon.

Boris Johnson refused to rule out another lockdown but said the Government would do everything possible to prevent national restrictions forcing businesses to close.

He’s previously said another national shutdown would be the “nuclear” option and ministers are determined to do everything possible to keep rules local.

But it comes as the UK had almost 4,000 new cases of coronavirus today and 20 new deaths.

The PM said this afternoon: “I don’t want a second national lockdown. I think it would be completely wrong for this country.”

“I very much doubt whether the financial consequences would be anything but disastrous. But we have to make sure we defeat the disease that we’ve set out.

“And so when I see people arguing against the rule of six, or saying the Government is coming in too hard on individual liberties, I sympathise with that but we must beat this disease.”

And the PM said the country’s coffers couldn’t afford another lockdown either, after the Chancellor spent billions earlier this year trying to keep the economy afloat.

He said today: “We do think the disease is gaining ground.

“We have a very clear means to suppress it. That is social distancing – the rule of six – and I urge people to obey it.”

This week ministers banned people from meeting in groups of more than six in a bid to stop the virus getting out of control again.

And the entire nation could face curfews on going out if the tough new laws – which could see people fined £100 – don’t work.

Boris also warned that deaths would rise in the next few weeks, telling MPs: “We must expect those infections proportionately to lead to mortality.” 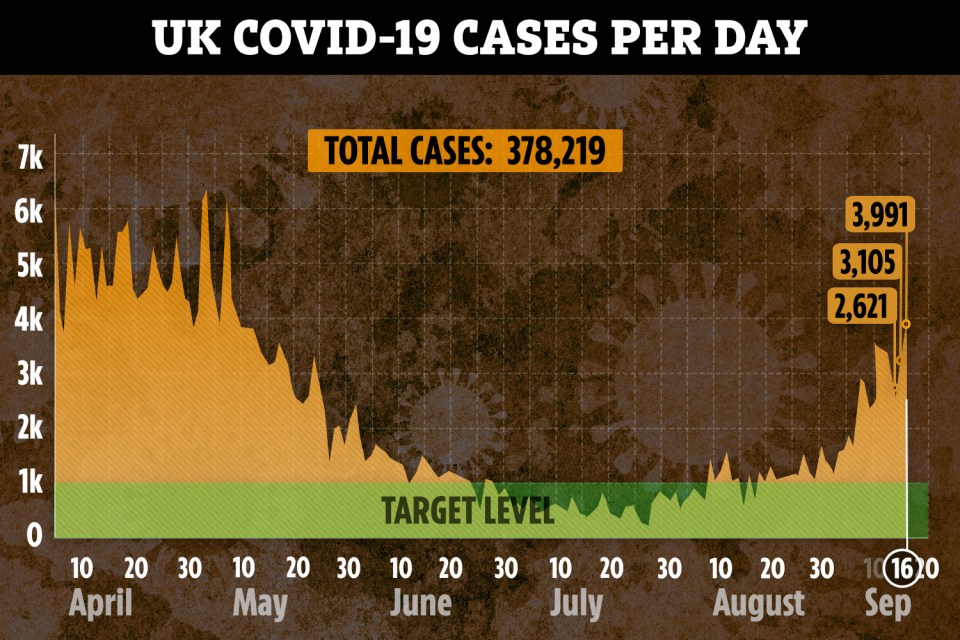 Local lockdowns are being used instead of sweeping national measures in areas where there are spikes in fresh cases.

And ministers are looking at bringing in curfews for pubs to try and stop the spread of the virus without having to close down venues entirely.

Mr Johnson said the rate of older people getting coronavirus had doubled to 12 per 100,000 in the last week – and that it was bound to lead to deaths.

Data published by Downing Street showed the rate of coronavirus among those aged 20-29 hit 46 per 100,000 – compared with just 30 last week.

He said: “The (will be a) progression of the disease from younger groups, who are much less prone to worst effects, up into the older groups.

“We must expect those infections proportionately to lead to mortality.”

It comes after pictures showed thousands of freshers piling into university were breaking the rule of six and risking spreading the virus.

The PM was asked this afternoon if there were enough tests to meet the current demand in the UK, and he replied frankly: “The short answer is no, we don’t.

“We don’t have the testing capacity. We would like to test everyone who wants a test.”

But he again committed to the promise of reaching 500,000 by the end of October – around 200,000 more than the current capacity.

He said he “hopes” that will be enough to meet the demand.

The Prime Minister told MPs: “Everything is being done that we possibly can to increase testing capacity.

“Testing capacity just in the last two weeks has gone up 10 per cent.”

Schools have been struggling to get tests for staff and pupils – forcing kids at more than 740 establishments to send people home.

Earlier minister Robert Buckland said that teachers would likely be top of the priority list – after NHS and social care staff.

Around 11 per cent of kids were absent from school this week – partly over coronavirus fears.

Furious headteachers warned youngsters are being plunged into a second “lockdown by default” because of the crisis.

Steve Chalke, head of the Oasis Academies Trust schools chain, said he has been told 740 schools in England have been shut or sent kids home because of suspected Covid outbreaks – around three per cent of the total.

In some schools this includes several year groups being banished from the classroom.

He said today: “These are kids who have a mountain to climb after the schools shutdown – they have lost confidence.

“And now, just days after schools reopened they are being sent home again for two weeks.

“The Prime Minister says we have a moral duty to get all kids back to school, but sending them back is not the same thing as staying in school.”

A staggering 74 per cent of parents who needed a Covid test for their kid in the past fortnight said they struggled to get one, a snap poll from Netmums found.

The PM stressed today schools should not be sending everyone for a test if they did not have symptoms.

Only kids who have been showing a fever, new cough, or loss of taste or smell should enquire about a test.

Theatres and large-scale football games will only be able to return when the UK has access to rapid coronavirus tests which tell if someone has it in minutes, the PM said today.

The first pilots for live games are set to take place this weekend, but many theatres are still operating at just a fraction of the capacity.

He promised the Government would show “creativity and flexibility” in providing support for the economy as the furlough scheme ends at the end of October.

And he said: “This government has done more than virtually any other government around the world to support people at risk of losing their jobs because of Covid.

“Going forward … we will continue to show great creativity and flexibility, which the Chancellor has shown, in trying to look after every sector of the economy.”

10 classic books that keep getting banned