THE BBC used to make wonderful programmes – but today its chief talent is for alienating the British public with its extravagance and attachment to the woke agenda.

The very people who pay for this vast monolith of political correctness and self-serving bureaucracy are the ones often treated with contempt by the Corporation.

That is clear from yesterday’s predictable but depressing revelations about top BBC presenters’ salaries, whose spectacular scale is an expensive insult to licence payers – coming just weeks after the withdrawal of free TV licences for pensioners.

That move was justified by squeals of poverty from the BBC, though there is precious little sign of such hardship among the well-upholstered ranks of presenters.

Recently, we’ve also witnessed the disgraceful attempt to downgrade the Last Night of the Proms, that annual patriotic singalong which came close to being carved up by Leftist executives.

The modern Corporation seems unable to even countenance a change of priorities.

The pay revelations prove subsidised self-indulgence lies at the core of its soul – a reflection of the brute power of the Corporation’s broadcasting monopoly.

The rest of the country might be suffering from the consequences of Covid, particularly economic insecurity and the threat of mass unemployment.

But such anxieties do not exist among the generously-rewarded stars of screen and microphone at Broadcasting House.

Neither empty talk of restraint nor coronavirus have been any obstacle on the path to ever greater riches.

Staggering spending on the rise

According to the BBC annual report published yesterday, total spending on on-air talent in the last year actually rose from £143.6million to £144.7million.

There were no fewer than 75 performers who received over £150,000, a higher salary than the Prime Minister’s.

Such figures make a mockery of the Corporation’s pretence that it has been forced by penury to cut pensioners’ licences.

Indeed, far from falling, the BBC’s annual income rose from £4.889billion to £4.943billion over the last year – £3.5billion of which came from the licence fee.

Emily Maitlis, who’s been accused of bias against the Tories, makes £370,000 a year[/caption]

Some performers did particularly well.

The Radio 2 presenter Zoe Ball saw her pay rise by almost £1million to £1.36million, despite losing one million listeners on the station since she replaced Chris Evans. 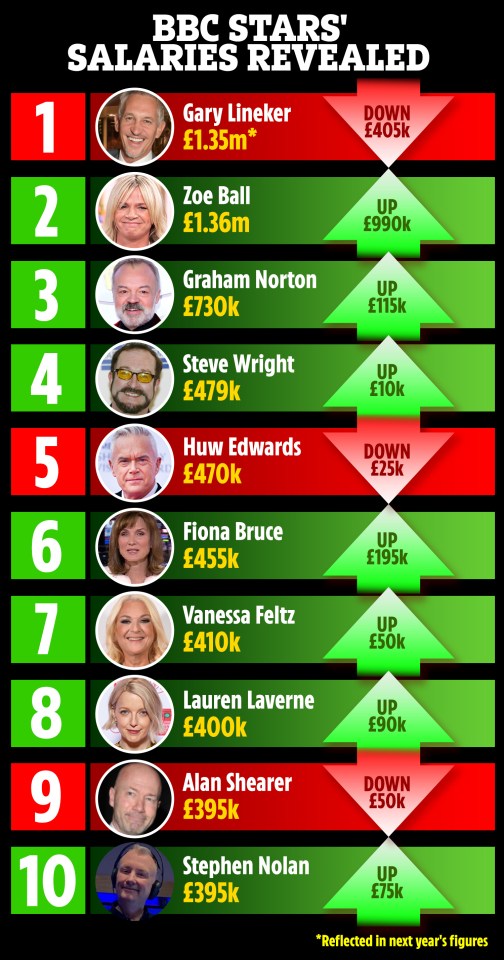 In a remarkable inversion of normal commercial rules, she has been rewarded for a decline in popularity.

The BBC defends her vast package by arguing that she pulls in an audience of more than 8million, but so does Radio 2’s Ken Bruce and he is paid less than a third of Ball’s earnings.

Time to challenge the monopoly

The new Director General of the BBC Tim Davie justified these pay rates on the grounds that they provided “the best talent and the best value”.

Only in the metropolitan bubble could there be a belief that Ball is worth a £1.36million-a-year – or that Gary Lineker, the Beeb’s highest paid star, is worth £1.755million.

And only an organisation that has lost its grip on morality and reality would think that ordinary citizens should be imprisoned for the offence of refusing to underwrite a licence fee system that indulges in such excess.

The BBC sometimes whines that it has to pay “market rates” to attract the best talent, but that is just more deceit.

Fergal Keane is a foreign correspondent with BBC News on £209,999 a year[/caption]

Thanks to its uniquely privileged position, the BBC does not face any real challenge from other broadcasters.

Buttressed by its colossal guaranteed income, it dominates its field in a way that is increasingly outdated in our age of the internet and multiple platforms.

Immune to competition, the BBC retains its culture of empire-building and managerial hierarchies.

As the annual report reveals, the headcount in its public service arm went up by 300 to over 19,500 and the number of senior managers increased to 253.

In parallel with the regiment of overpaid stars, the Corporation has a large band of well-heeled executives, like the Director of Nations and Regions Ken McQuarie (who retires from his post this month) on £328,000; Director of News Fran Unsworth on £342,000; or Director of Radio, former Labour Minister James Purnell, on £347,000, up from £318,000 the year before.

Fergal Keane enjoyed an extra £29,000 on top of his enormous existing wage this year[/caption]

This largesse is accompanied by the devotion to the progressive cause of social change.

Like an evangelical church, the BBC thinks it has a duty to promote its own brand of righteousness.

That is why it is fixated by identity politics and propaganda for diversity.

Nor is it a coincidence that Lineker is one of the high priests of wokeness, just as Newsnight presenter Emily Maitlis – increasingly renowned for her partisan attacks on the Tory Government – should see her pay go up from £260,000 last year to £370,000 in 2019/20.

I met Dennis Nilsen - he was articulate, witty and as morally mad as possible

LAST OF THE FEW

Along with the other recent rows, this week’s news on top pay at the BBC makes an unanswerable case for reform.

Such a process should begin with the replacement of the licence fee by a subscription service.

If the BBC really thinks its stars are value for money, it should put that claim to the public test.

Tiny Submarines Could Be Coming To Shores Near You

Adam Duvall is killing it in September