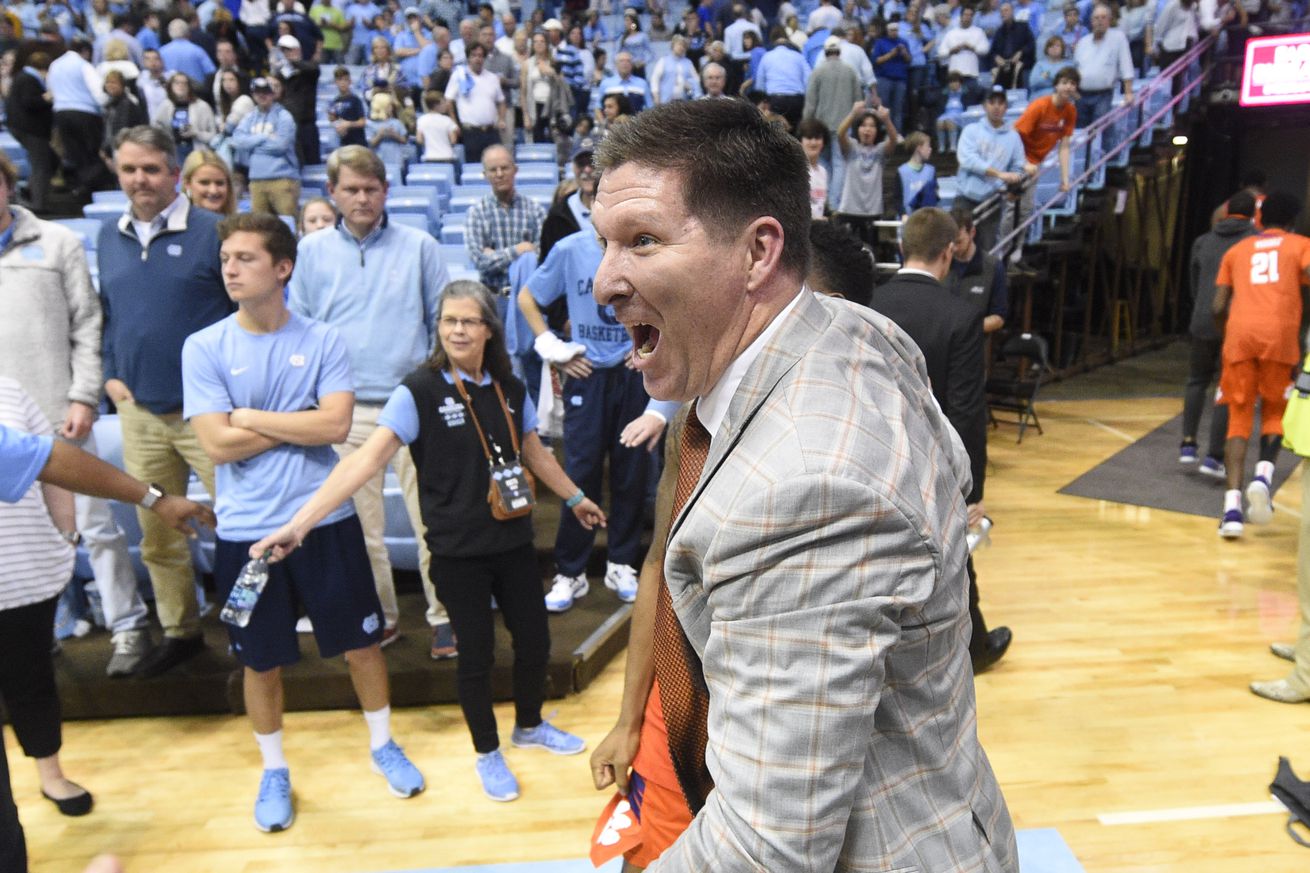 The Tigers could be a nice ACC surprise

You know what we read recently that took us aback?

Clemson’s Brad Brownell has only been to the Big Dance three times since taking the Clemson job in 2010.

Granted, it’s, well, Clemson. The Tigers are an incredible football program but basketball?

It’s always been hit and miss.

And bear in mind that we think Brownell is no worse than the second-best coach Clemson has ever had.

It’s just a different experience there than it is around the ACC, especially with the Big Four.

Last year wasn’t a great year for Clemson although injuries hit hard. And the Tigers did something no other Clemson team has ever done: winning in Chapel Hill.

Even that wasn’t easy and it required UNC, which finished just 14-9 (we told you we’d be repeating this in previews. Feel free to make it a drinking game) to collapse down the stretch.

Even so, they did it and won glory that no other Tiger team ever has.

So what about this year?

Well, Clemson loses Tevin Mack and Curran Scott. Scott was in the rotation but he was hardly a major ACC factor.

Tevin is a loss though.

So obviously most of the talent is back and the best player returning is Aamir Simms.

Simms, now a 6-9/240 lb. senior, is the classic mismatch: too strong for smaller guys, too quick for bigger guys. Plus he’s an excellent outside shooter - 40 percent last year - so you have to respect that.

He’s the heart of their team and a realistic candidate for first team All-ACC.

Clemson has a nice backcourt too: 6-2 Al-Amir Dawes will be the point guard and he had an impressive freshman campaign. He’s quick and unselfish although erratic at times. He may lose time to Fordham transfer Nick Honor, who is eligible now.

The Tigers also have John Newmann and Clyde Trapp. Newman, a 6-5 guard from Greensboro Day, is really athletic and dangerous. At a minimum, Trapp is a useful defender. If he improves his shooting - and this goes for all the returning guards - he’ll get more minutes.

Tyson has had his moments at Clemson. He may never be great, but he’ll always be dangerous. You don't want to let him get going. Hunter got some minutes last year but he seems like a guy likely to emerge later in his career if then.

Like a lot of his teammates, Hunter had injury issues last season so we’ll wait and see what he’s got.

Hemenway is kind of thin and missed a lot of last year after an early injury, but he looks old school as hell, like Bob Cousy’s late life love child (kidding Cooz, kidding), and supposedly he can really shoot. In limited minutes he shot 47 percent from deep (20-42). He’s not a great defender though.

New players: Clemson’s biggest problems last year were interrelated: size and injuries. UNC-Asheville transfer Jonathan Baehre is 6-10 and might have helped, but he’s had two ACLs in the same knee. You hope for the best, but who knows? He’s a senior now after barely playing last season due to injuries.

Hall is generally expected to start or at least to get solid minutes. At a minimum (and we think it’ll be more than that) he gives size off the bench.

Kidd is a somewhat late arrival, having reclassified in July. He and Prosper (apparently he’s O-Max, thus offering a clever counterpoint to O’Neil) are both welcome athletic additions.

Sheer size alone will help Clemson inside which in turn should help shooting percentages. Last year the injury-riddled Tigers had to put four guards out around Simms most of the time and it’s not like Brownell is an offensive maestro like Virginia Tech’s Mike Young. He's a D-first coach.

Yet when he’s had offensive talent too, as he did in 2017-18, his system can work really, really well.

We’d recommend just giving Brownell and Clemson a pass on last year because of the injury plague.

With quality size, a solid backcourt rotation and some mid-size athletes, not to mention a very deep roster, we think the Tigers should be much better this year. Moving up is never easy in the ACC, but you can’t rule it out, particularly with a quality coach.

We feel perfectly safe saying this: no one is going to look at the schedule and think, phew, good thing we got Clemson.

Too much talent and depth for that.

Since we’ve been talking about ACC players from North Carolina, here are Clemson’s: