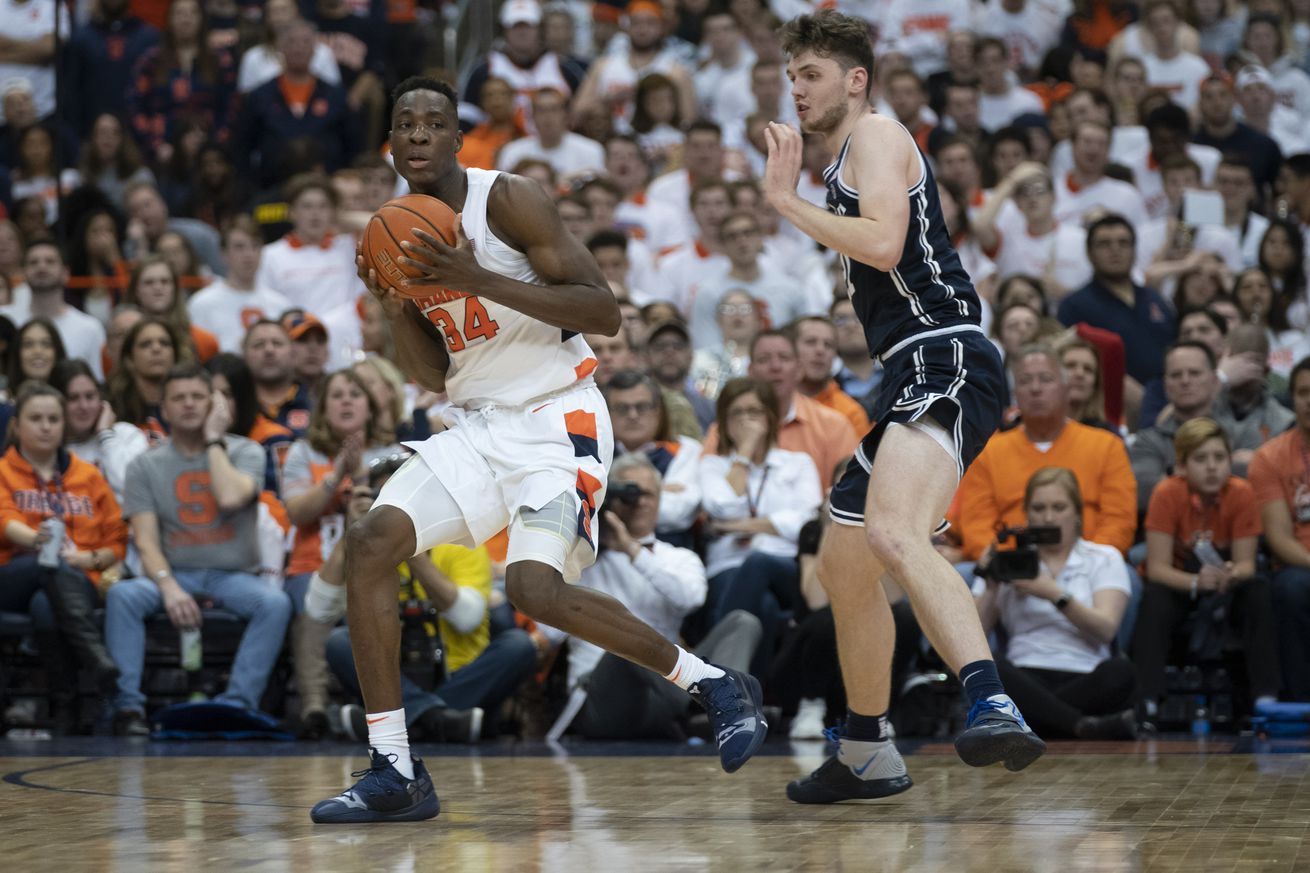 SYRACUSE, NY - FEBRUARY 01: Syracuse Orange Forward Bourama Sidibe (34) grabs a rebound with Duke Blue Devils Forward Matthew Hurt (21) defending during the second half of the College Basketball game between the Duke Blue Devils and the Syracuse Orange on February 1, 2020, at the Carrier Dome in Syracuse, NY. | Photo by Gregory Fisher/Icon Sportswire via Getty Images

The ACC added an eighth member, shambolic Georgia Tech, in 1979-80. That same year the made-for-basketball Big East Conference was formed. Two of the seven original members of the Big East, Boston College and Syracuse, are now ACC members, along with four others who joined along the way.

In all that time, across the intervening 40 years, the ACC had only six players foul out of at least 10 games each. Only one has done it since 2001 – Syracuse big man Bourama Sidibe, who notched 10 disqualifications in 32 games in 2020.

Sidibe, a 6-10 player from Mali, committed a foul every 5.85 minutes he was on the court last season, rather limiting his effectiveness. Even so he led the Orange in blocked shots (44) and was second in steals (40), the latter an especially impressive total for a big man. Most notably Sidibe led his squad in rebounds with 7.6 per outing, evidence of aggressiveness that earned him all those blocks, steals and fouls.

The 185-pound Dolezaj, who’ll forever be known for taking a charge in 2019 on a massively larger Zion Williamson and living to tell about it, tied a dozen other players over the past four decades with his nine disqualifications. He accrued fouls at a relatively sedate rate of one every 10.24 minutes, second-slowest among the legion of boom.

Also worth noting: Sidibe and Dolezaj, a Slovakian from Bratislava, each fouled out more times in 2020 than the combined rosters of eight other ACC teams – Clemson, FSU, Louisville, Miami, UNC, Notre Dame, Virginia and Virginia Tech.

The pair helped Syracuse lead the league with 24 disqualifications, one more than Georgia Tech.

When and if there’s another season with those two seniors still on the Orange roster, a bit more personal control, or control of personals, could transform them into one of the college game’s more formidable inside duos.

New US sanctions are part of drive to ‘choke’ Syrians, says Syria’s Assad