“I suffered for a very long time, for over a decade, where I felt like I had imposter syndrome,” John Glasgow tells Design Week. “I’d worry that someone would call me out, that my opinion wasn’t right.” Glasgow is co-founder of Vault49, a design studio based in New York which has offices in London. He has been in the creative industry for almost two decades now, and still recalls feeling uncomfortable because so few people looked like him or found the same things interesting.

He says that it is rare for someone like him – black and from a lower socio-economic background – to achieve his status within the design industry. The figures back this up. A 2019 census of the US design industry by the American Institute of Graphic Arts and Google found that 71% of employees were white. 8% were Hispanic, another 9% were Asian and only 3% were African-American. That is 318 black designers among the 9,429 surveyed. In a 2019 industry survey, Design Week found that two thirds of respondents were white British and the majority of the rest were white non-British (further breakdown is available in the fifth slide).

The effects of this diversity problem run deep, covering racism on both a “micro” and “macro” scale, Glasgow says. It results in an atmosphere where people of colour, and especially black designers, feel a lack of support and belief in themselves. The problem is made more complex by gender. Cultural strategist Leonie Annor-Owiredu tells Design Week that not only does the world of branding take from black culture without proper credit, but that the workplace is full of “microagressions”. As a black woman, she encounters the setbacks of both racism and sexism. It’s why she set up Diversity in Action, an organisation that seeks to create change in companies, from cultural training (teaching around unconscious bias, for example) to revamping Human Resources departments.

“I have to pick my battles”

Glasgow says that the reactions to bringing up these issues in the workdplace is usually a “quiet” one. “Colour drains from people’s faces, air is taken out of the room, and there are uncomfortable silences,” he says. It means that Glasgow is particular about picking the “right moments” and the “right battles”. Being the co-founder of an international studio may mean that his voice carries more weight but he also has more responsibility.

When faced with a client who might not sympathise with the issues at hand, Glasgow has to weigh up issues. “As a founder, I’m trying to make a change for a cultural point of view, but I have mouths to feed and health insurance to cover,” he says. “I have to pick my battles, and not be seen as the black person in the room with a chip on his shoulder.”

Black Lives Matter has changed this. Glasgow says that he feels more confident now in speaking out about these issues than he did over three months ago. He says that not only has he seen other groups of people marching – from the white, Asian and Latin communities – but also feels more of a responsibility to speak out. Even when issues are micro, it is “still a form of racism and stereotyping.” He adds, “We are in some ways building the problem by not being vocal about it.”

On a recent call with ten agencies to discuss industry issues, he says that there was one other black person. The other agencies didn’t have black people or people of colour. When conversation turned to Black Lives Matter, they looked to Glasgow to work out what to do and he suggested that they donate money to relevant causes but also work out what they could do to “be part of the solution”. “Challenge their clients and challenge themselves,” he advised.

Glasgow’s own rise to being a co-founder of a global design studio started with a coincidence. He used to print illustrations in the day and flypostered designs around London at night, with his friend (and later Vault49 co-founder) Jonathan Kenyon. One night he stopped off at a chip shop, and stuck designs on a “derelict” building next door, which turned out to be the offices for Dazed & Confused magazine. The magazine loved the designers’ work and featured it in its gallery space. From there, he worked up from bedroom in London to a bedroom in New York. But being in the industry often means being misunderstood. Glasgow says one of the reasons why black designers do not get promoted is because of negative stereotypes; “that black designers don’t work hard, that they’re not focused”. “These stereotypes allow black people not to be promoted,” he adds.

Mentorship schemes are a way to solve this. Vault49 runs the NY-LON Exchange Programme, a collaboration established between University of the Arts London, Jay Z’s Shawn Carter Foundation and the studio. It takes students from low income backgrounds studying in London and New York and sets them up in a studio setting with a brief. The course lasts a week though Glasgow hopes that the effects are longer. He mentors students (with portfolio review, for example) and many have come to the studio for internships. It aims to prepare them for the industry. However, Glasgow recalls that for the first exchange not a single black student applied. And in the second year, only two black students took part. He says it’s another result of “imposter syndrome”: “young black creatives don’t feel worthy enough.”

Mentorship programmes that are focused at higher education have their own problems. The universities – especially in the US – come with a hefty price tag which means that they form an “elitist system”. Glasgow now also mentors and speaks about branding at the One School, a 16-month free course run by the One Club (an American non-profit organisation that “promotes excellence in advertising”). This has been an effort to get back to the “grass roots” of the industry. It was set up by Spotify creative director Oriel Davis-Lyons who LinkedIn who criticised the cost of advertising school in a LinkedIn post in June. “Who can do multiple internships in the country’s most expensive cities until they land a job?” he asked. “The road into this industry is one with many tolls that only the most privileged can pay.”

“Representation is a global issue” 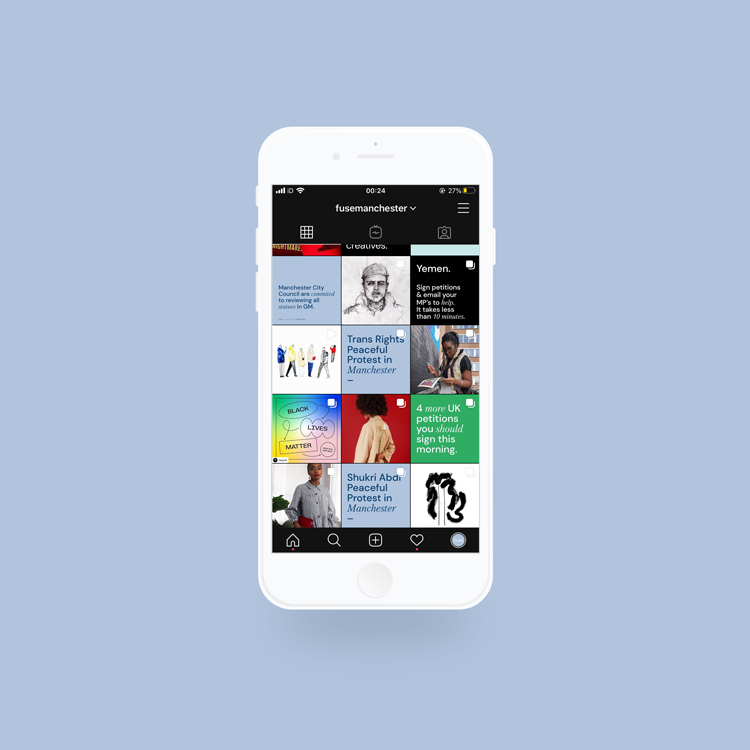 The past few months have not only seen a desire for change in the US. Last year, Jaheed Hussain set up Fuse, a platform for creatives of colour in Manchester. Lockdown has seen a rise in interest in the organisation, Hussain tells Design Week. Fuse puts a spotlight on creatives of colour through panel discussions and an online directory which highlights the work of people of colour. There are plans for expansion, not only in what Fuse covers but where it covers. A London chapter is being set up, though Hussain hopes that it will be wider than the UK. “Representation isn’t just a Manchester issue, it’s a global issue,” he says.

Hussain likens it to New York designer Jessica Walsh’s scheme, Ladies, Wine and Design which promotes the work of designers who are women. There are two motivations for Fuse, according to Hussain. The first is to create more visibility for people of colour in the creative industries. Hussain says that when it first launched, there was no organisation or community-based group doing anything similar. “People were fond of seeing a platform with people of colour on,” he says. “The word ‘need’ has come up a lot.”

Perhaps unsurprisingly, he says that people of colour have been wanting to be a part of it since the get go. One of the reasons it has taken off so quickly, Hussain believes, is because Manchester is “close-knit”. “Everyone knows everyone,” he says. “Every event you went to, you’d notice the same people coming.” By changing the faces of those creatives, he has managed to implement change relatively quickly.

There are plans for a “mini conference” in Manchester and an exhibition which would showcase graduate works. It was supposed to take place at the beginning of next year though like many design events, this might be pushed back because of coronavirus. Hussain hopes that this visibility will make a difference for young designers. He is particularly interested in editorial design, and says: “I didn’t have any role models growing up; I didn’t discover any south Asian British Bangladeshi designers.” “This platform helps find those roles models,” he adds. In the UK, Design Can was established with a similar goal – to amplify the work and voices of people of colour.

“They hold us accountable to making change” 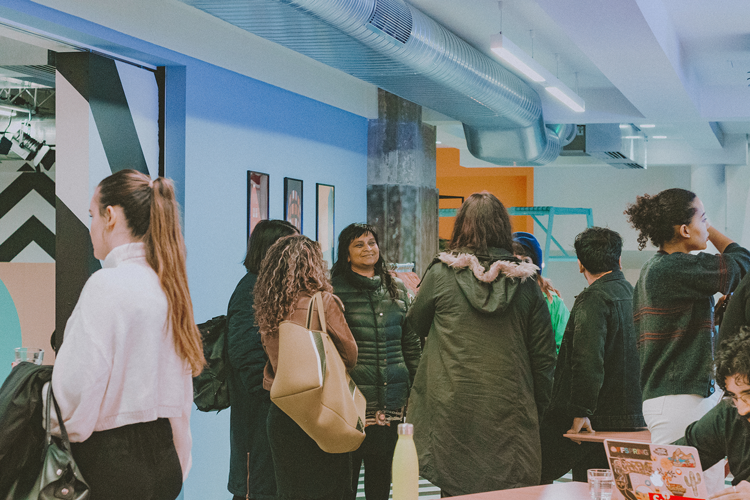 The second is to move the conversation on. Both Glasgow and Hussain mention that creatives of colour should not only speak about representation in the industry but about design itself. Otherwise, there is a danger that the issue will just be divided and left to people of colour. Hussain highlights a popular feature from recent graduate Rand Jasim who write about the influence of interior design on children with autism. He also namechecks Kofi Nelson who spoke at Fuse in March, just before lockdown. He’s a multidisciplinary creative with a focus on graphic design. “He’s quite shy but opened up a lot about public speaking and problems with expressing himself,” Hussain says.

These communities appear to foster real change in the industry, a not-unusual way for creatives to communicate. In the wake of this year’s lockdown, Slack groups were set up for designers to discuss issues around work and wellbeing. Glasgow is a part of a Slack group called Dope Black Dads. (There is a version for mothers). It’s a “safe space where we can talk about the layers we put on our ourselves and fitting in all these environments”.

Glasgow says that what has excited him most about this period is the energy of black designers approaching him. In particular, it is the “passion and determination they have in an industry that is so white-washed and where opportunities are limited” that inspires him. And ultimately, it’s this younger generation who will be in charge one day. “They hold us accountable to making change.”

The post Can the design industry’s diversity problem be fixed? appeared first on Design Week.