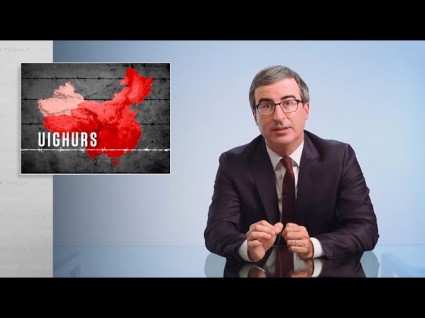 John Oliver took a serious look at China’s treatment of the Uighurs, a predominately Muslim ethnic minority in northwest China. Via Rolling Stone:

The Uighurs, as Oliver explained, live primarily in the Xinjiang province; they’re culturally and ethnically distinct from most of the rest of China (which is 90% Han Chinese) and tend to be practicing Muslims in a largely secular country. The relationship between the Uighurs and the Chinese government has long been fraught, and it escalated significantly in 2014 when President Xi Jinping instituted a campaign to crack down on violent terrorism that essentially gave the Chinese government carte blanche to surveil and detain Uighurs.

Xinjiang is now one of the most heavily policed areas in the world, and Oliver highlighted some of the innocuous activities the Chinese government has deemed indicators of religious extremism to surveil Uighurs. Among them are suddenly quitting smoking and drinking, or buying equipment like dumbbells for no obvious reason. “Although that last one would clearly not be an issue for me,” Oliver cracked while flexing his muscles. “Because I’ve got too pretty obvious reasons for dumbbell ownership right here — it’s not called a workout if you don’t put the work in Broseph Bronrad.”