MEGAN Thee Stallion has broken down in tears during an Instagram Live in which she claimed she was shot in both feet during an alleged altercation with Tory Lanez.

Police were called to a party in the Hollywood Hills in the early hours of July 12 after gunshots rung out.

It was later alleged that Tory shot the rapper after their fight inside an SUV, and Megan has now opened up on the “super scary” situation.

She said in the video: “I was shot in both of my feet.”

After a long pause in which she gathered her emotions, she said: “I was shot in both of my feet and I had to have surgery to have the s**t taken out, the bullets taken out.

“And it was super scary.”

According to claims by a source with a direct connection to the case, an argument started after Tory, 27, and Megan, 25, left a Hollywood Hills party together in his SUV.

Tory pulled out his gun inside the car and allegedly hit Megan in the feet twice when she and her friend, Kelsey Nicole, wanted out of the vehicle.

Another source close to the Canadian rapper claimed it was an accident.

“Tory fired the shots from within the vehicle while Megan was outside trying to leave,” another source claimed to Page Six on Thursday.

Megan underwent surgery to remove bullets[/caption] She has had hits with songs Savage and Hot Girl Summer[/caption] It is rumored that Tory is dating Megan, although the pair have never confirmed it[/caption]

“There is video and the police are investigating. This is a case of a man physically harming and abusing a woman.”

However, Page Six could not confirm whether there was a video submitted to the investigation, as LAPD said that any videos would “not be released until the case goes to court in order to protect the integrity of the case.”

Police would not confirm whether Lanez is a suspect, but mainly because witnesses are not cooperating with the investigation, according to TMZ.

Video footage taken at the time of the incident showed cops demanding the occupants exit the vehicle, with Megan – in a bikini – leaving with her hands in the air and calling out: “My hands are up.”

Tory was arrested for carrying a concealed weapon in a vehicle, which is a felony.

The rapper posted $35,000 bail and was released at 10am that same day; he is scheduled to appear in court on October 13.

Tory, 27, is a Canadian rapper who rose to fame with his hit singles, Say It and Luv, which peaked at number 23 and 19 on the Billboard Hot 100. 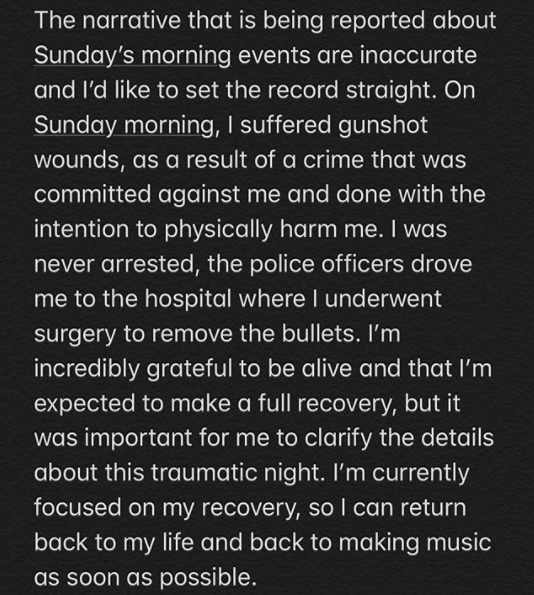 At the time it was suggested she had cut her foot on glass but she later clarified she had been attacked, posting on social media: “On Sunday morning, I suffered gunshot wounds, as a result of a crime that was committed against me and done with the intention to physically harm me.

“I was never arrested, the police officers drove me to the hospital where I underwent surgery to remove the bullets.

“I’m incredibly grateful to be alive and that I’m expected to make a full recovery, but it was important for me to clarify the details about this traumatic night.

“I’m currently focused on my recovery, so I can return back to my life and back to making music as soon as possible.”

most read in entertainment

Stacey Solomon reveals her personal phone number has been leaked

Meg and Tory had been party-hopping all night and earlier on Saturday they were with Kylie Jenner at her Holmby Hills home, enjoying a pool party.

The three all appeared together on Instagram Live at Kylie’s house.

From Bureaucracy to Architecture: 73 Years After Independence Colonial Traces Still Linger in India