FRANTICALLY paddling for their lives, three desperate migrants use metal shovels as oars to inch their kayak towards Dover’s towering White Cliffs.

After rowing for at least 11 miles as they head from the world’s seventh biggest economy towards its sixth, the soaked men are parched and exhausted.

Last week saw the 3,000th migrant arrive by illicit boat since the turn of the year[/caption] A dinghy rower with only a shovel is all smiles[/caption]

Mercifully, the English Channel is as close as it ever gets to a mill pond as our boat approaches theirs amid the early-morning swell.

Under a blazing July sun the three men — none wearing lifejackets — gesture towards our catamaran the Portia for water as giant container vessels steam past them in the world’s busiest shipping lanes.

Yet for much of their perilous journey on this crystal-clear day, I watch as they are shadowed by French patrol boat P618 Escaut, which appears to make no effort to stop or rescue them.

The men are finally plucked from their kayak by British Border Force rescuers aboard patrol vessel Speedwell when they reach UK waters and are transferred ashore at Dover Marina.

The crossings are a maritime dance with death that now happen daily if the weather is favourable.

Home Secretary Priti Patel blames the French for not turning back the boats. Britain has shelled out almost £62million in five years, funding patrols along the French coast.

It seemed miraculous that the rowers’ rickety craft had borne them so far without them drowning. At least four migrants lost their lives while attempting to cross the Channel last year but there are fears that more may have perished unnoticed.

The skipper of my chartered fishing boat, Matt Coker, 40, who knows the Channel’s dangerous tides as well as anyone, said: “I’m surprised there haven’t been more tragedies.

“I thought the idea was that the French were supposed to be stopping the migrant boats reaching the dangerous Channel shipping lanes.

“Instead they’re just following the migrant boats until they reach British waters. They are escorting them across.”

Some 90 minutes earlier I had watched a tiny dinghy with two men aboard — believed to be Algerians — buzzing through French waters.

Like the rowers, they were shadowed by a French law enforcement vessel but again, I saw no attempt to halt the craft.

The little boat, powered by an outboard motor, looked more suited to carrying a child around a boating lake than crossing the choppy waters of the Channel.

One of its passengers was using a white plimsoll to bail out sea water as two UK Coastguard planes patrolled overhead. When the pair realised they had reached British waters, one took smiling selfies to commemorate their feat and gave the thumbs-up.

Soon the Border Force’s Hunter patrol vessel rescued them and took them to port in Dover.

Border Force officer helps migrants off the lifeboat at Dover[/caption]

Later a helicopter was scrambled as a RIB — or rigid inflatable boat — packed with more migrants was spotted. Border Force intercepted four boats carrying 43 migrants when I was at sea on Wednesday last week.

The previous day I had seen 159 migrants brought ashore, including at least three small children, after 13 boats were stopped.

One elderly woman had braved the waves dressed in a leopard-print jacket and clutching a large handbag.

The Sun also obtained footage of a RIB packed with 13 migrants, including a child, arriving in British waters on Thursday.

Again it appeared a French law enforcement vessel had shadowed them until they arrived in UK waters.

While the three rowers’ crossing looked to be an amateur job, perhaps masterminded by the men themselves, the illicit cross-Channel passage is a lucrative business largely controlled by ruthless people-smugglers.

They grossly overload the dinghies, showing little regard for human life.

A storage centre in Kent for migrant boats[/caption]

One smuggler, Afghan Inamullah Jabar Khel, 28, was jailed for three years in France in May after boasting to undercover Sun reporters that he had smuggled 300 people into Britain.

When Khel was arrested in Paris on March 19 he had the equivalent of £3,500 in cash on him and was about to fly to Baghdad via Istanbul.

He was suspected of being in a network of migrant smugglers transporting people from France to the UK since December 2018 and was making up to £6,000 per migrant.

A French police source said: “The film footage and other information provided by The Sun was the key to getting this criminal tried and convicted. We want to thank The Sun team for everything they did.”

At an industrial estate near Dover Marina, hundreds of dinghies used in past attempts to cross the Channel are stored at a high-security government compound.

The Home Office said the boats are kept to use as evidence in smuggling prosecutions. Smugglers charge around £6,000 for a place on a speedboat, £2,500 for a blow-up dinghy or £800 for a kayak.

In desperation, migrants have previously attempted to cross the Channel — 20 miles at its narrowest — on two surfboards tied together, an inflatable rubber ring and even a children’s blue and white inflatable paddling pool using oars.

Lucy Moreton, from the Immigration Services Union, which represents Border Force staff, told The Sun: “Where there is a threat to life, the French will simply escort them into our waters.

A view of the Dinghy Graveyard near Dover [/caption] 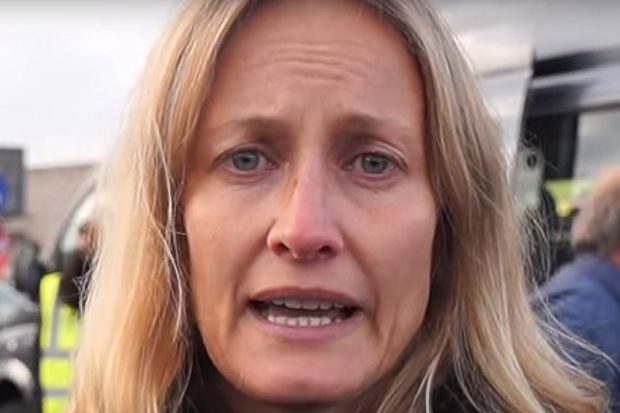 NO wonder more people than ever are trying to cross the Channel. Conditions in Calais are as bad as I have seen since 2015.

We have watched police violently evict people from tents, destroying possessions and forcing them on to buses.

When they return, they are left sleeping on Tarmac and denied food and water.

The craft they cross in are astoundingly dangerous. I’m terrified there’s going to be a disaster soon.

The Government’s proposals are just a repeat of what we’ve had for the last five years. They achieve nothing other than the brutalisation of already traumatised people.

Those people are like you and me. They love their families, sharing food, playing football.

But they are escaping wars, persecution and torture and need our help.

A safe, fair system for asylum cases to be heard would solve this crisis once and for all.

People won’t risk their lives if there’s a legal process instead.

It would break the people smugglers’ business model and give us control of our border. It’s time the Government got a grip.

“At the moment, migrants are reasonably compliant with our crews but not so much with the French because they don’t want to go back to France, so they will threaten to jump overboard.”

She said of the dangers: “How we have got away with so few fatalities — that we know of — amazes me.

“The way currents work, sweeping up towards the Baltic, we wouldn’t find bodies. There’s no way of knowing it hasn’t happened.”

Priti Patel has revealed that Britain has offered to work with the French authorities on joint exercises to show how migrant boats could be returned to France safely, even when their occupants might resist being rescued.

She added that Border Force and the Navy have conducted exercises at sea to develop methods of safely returning boats to France.

They include trials of nets which the military use to clog propellers, bringing vessels to a standstill.

Immigration minister Chris Philp told The Sun: “These crossings are illegally facilitated. No one should be attempting them in the first place and those who reach the UK via this route are being returned.”

He added: “It is in France’s interests to stop these dangerous journeys. That is why they have stopped thousands of migrants this year. But we are pressing the French government for stronger enforcement measures, including interceptions at sea and direct returns of boats.”

But this month a French MP representing Calais dismissed Ms Patel’s assertion that the French were failing to turn back boats.

Pierre-Henri Dumont said: “We are stopping boats. It’s fake news to say we are not. Yesterday we stopped three. We brought back 40 migrants into Calais and Boulogne. Every day we are bringing migrants back.”

Our sight of the three desperate Channel rowers using shovels for paddles suggests the French have some way to go. 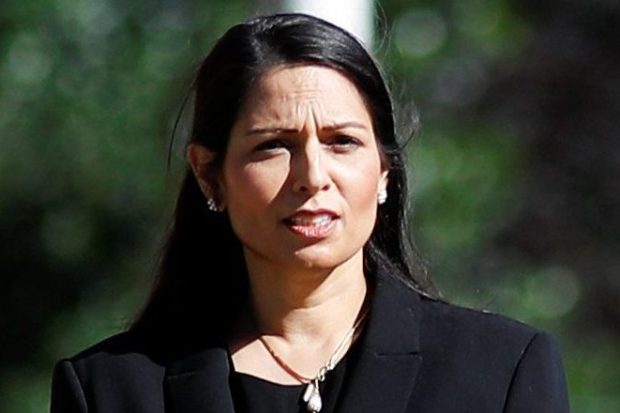 This month she said the number of migrants risking their lives to make the crossing was “shocking, appalling and unacceptably high”.

She said she had had “difficult” conversations with the French, and she told the Commons Home Affairs Committee: “French authorities are not intercepting boats at sea, even boats that have just left, that are 250 yards or so away.

“We want to make this unviable and in my view the only way to do this is by intercepting and returning the boats to France.”

The French insist they are following international maritime laws, which say saving lives is paramount.

But Ms Patel believes that France can stop and return the boats to their shores under maritime law.

Around 1,000 migrants were stopped by the French in April and May but Ms Patel added: “I feel there could be stronger enforcement measures on the French side – and they have heard that from me.”