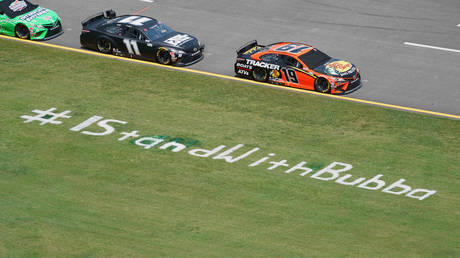 NASCAR driver Bubba Wallace continues to insist that a knotted rope found in his garage – which he never actually saw himself – had racist connotations, even after the FBI determined it was a benign door opener.

Federal investigators concluded on Tuesday that the alleged noose found in Wallace’s garage at the Talladega Superspeedway in Alabama was actually a garage door pull rope that had been there since at least last fall. But, far from being relieved that he hadn’t be targeted by a hate crime, Wallace appeared on CNN to emphasize that the rope was still a noose, regardless of its intended purpose.

Even host Don Lemon seemed puzzled by his argument. “Do you believe it was intended for you in that way? What are you saying here?” Lemon pressed Wallace.

Wallace went one step further, insisting that he had never seen a garage pull with a hand loop before, and that he has evidence that the rope was a “straight-up noose.”

This guy is full of crap

His decision to cling to the debunked hate crime caused many social media commentators to question his motives. Many pundits had initially argued that Wallace had been misled into believing the noose story, since he hadn’t actually seen the rope himself.

“By doubling down, he’s lost all credibility & is a willing participant in gaslighting all of us,” noted journalist Siraj Hashmi.

I was of the belief that Bubba Wallace was an innocent party in all of this & he was just stating what was reported to him before the FBI conducted an investigation. Now, by doubling down, he’s lost all credibility & is a willing participant in gaslighting all of us. For shame. https://t.co/kfvAzFBUk1

“The original report said that Bubba Wallace never saw the noose. Now he’s insisting through tears that it was a noose,” observed Daily Caller’s Greg Price. He compared Wallace to Jussie Smollett, the actor accused of orchestrating a hate-crime hoax in Chicago last year.

The media have been quick to broadcast alleged hate crimes – but in many instances it seems there are not-so-sinister motives. Earlier this month, ‘nooses’ found hanging in an Oakland park were revealed to be part of a swing for children to play with. The city’s mayor, however, insisted that an investigation into the harmless ropes was still warranted because “intentions don’t matter.”

One dead, two taken to hospital after rollover crash in N.W. Oklahoma City

Migrants living in soiled stables at sea are hungry and ill, captain warns