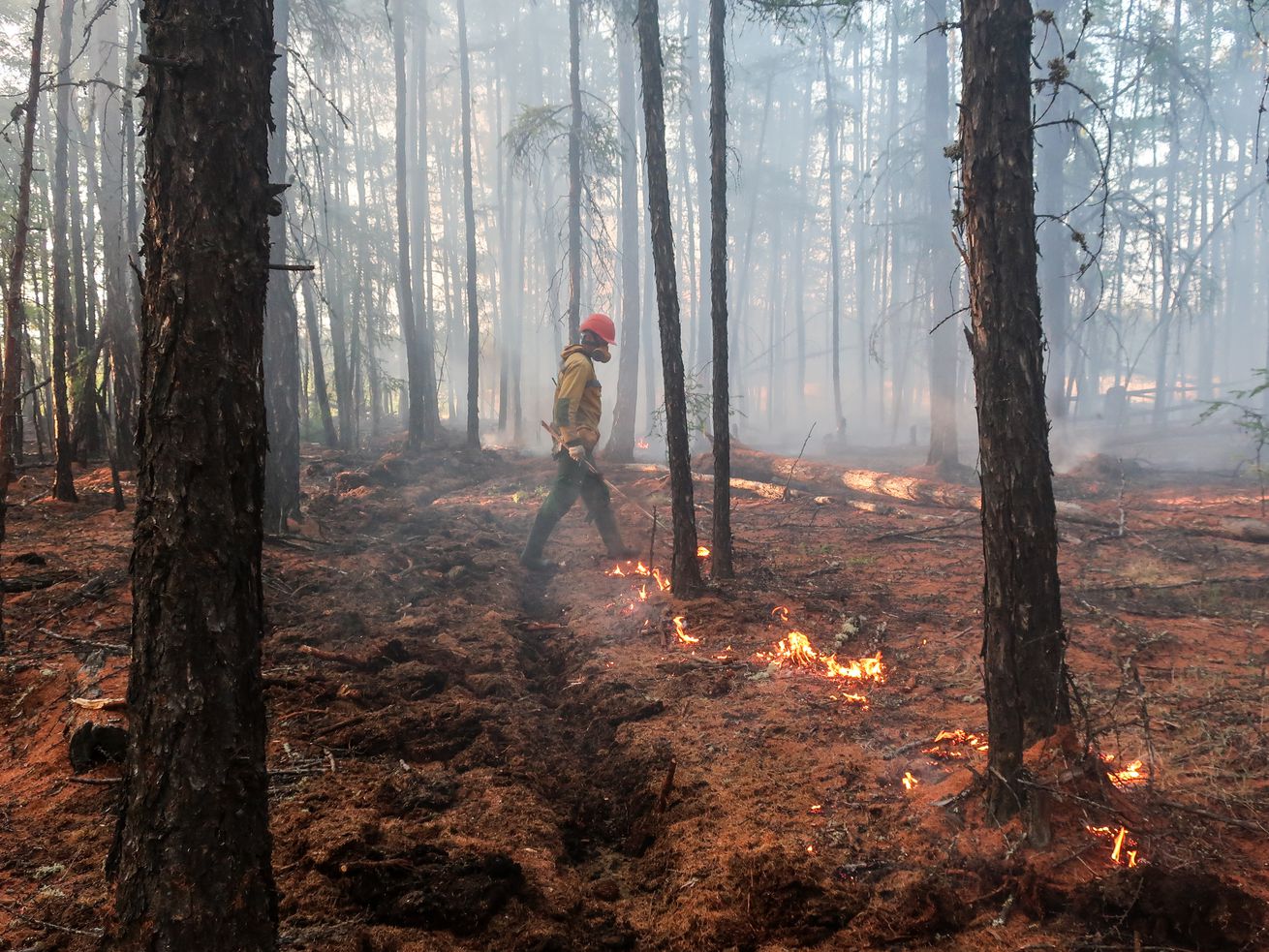 A firefighter in Siberia on June 2 monitors a controlled burn to reduce the threat from wildfires. Amid record heat, the region is bracing for more blazes. | Yevgeny Sofroneyev/TASS via Getty Images

Siberia’s triple-digit heat wave and wildfires are a glimpse into the future of the Arctic.

Over the weekend, Verkhoyansk, Russia, hit a temperature of 100.4 degrees Fahrenheit. Researchers are still working to confirm the result, which may be recognized as a record high for the Arctic Circle.

And the small Siberian town isn’t alone. Much of Russia has been facing a heat wave in recent days, with multiple locations reporting temperatures as high as 113 degrees on June 19. The surprising warmth was also felt in other parts of the Arctic like northern Canada and Scandinavia.

It’s part of a pattern of soaring temperatures this year in what are ordinarily some of the coolest parts of the planet. The current searing weather of the region stands to have global consequences and foreshadows the future of the Arctic, and the planet, as the climate changes.

Russia is emerging from its hottest winter on record, and since the beginning of the year, temperatures have averaged 12.4 degrees Fahrenheit above what’s typical in Siberia.

And this polar heat has led to a string of woes for the region, from a major oil spill stemming from thawing permafrost to early wildfires north of the Arctic circle in Russia and Alaska.

Several key factors aligned in recent months to heat up the Arctic. And they’re building on top of long-term warming trends. That means more of this kind of heat is likely in the future, and so are thawing, fires, and climate disruption.

Why parts of the Arctic are so searingly hot right now

The term “heat wave” is a relative measure. What temperatures count as a heat wave differ depending on the regional climate. It’s usually defined as temperatures above the 95th percentile of the historical distribution for a region.

So the bar for a heat wave in the Arctic is considerably lower than in lower latitudes. But the recent temperatures in the far north would be sweltering just about anywhere.

A heat wave begins with high atmospheric pressure building up over an area. A downward-moving air column compresses the air that’s closer to the ground, holding it still and heating it up. That high pressure also forces clouds away and around the column, creating an unobstructed line of light between the ground and the sun.

Over a period of days and weeks, the ground absorbs sunlight, and with stagnant air, heat accumulates and temperatures rise. “There’s nothing coming in and nothing going out,” explained Walt Meier, a senior research scientist at the National Snow and Ice Data Center at the University of Colorado Boulder. “It’s kind of like an oven basically.”

That’s the general formula for heat waves around the world. But there are also several unique ingredients contributing to the Arctic one.

In northern latitudes during the summer, there is near-continuous sunlight — even at night. That allows heat to accumulate faster than in areas that experience sunsets and can cool off in the evening.

Number of wildfires in the Arctic part of Yakutia continues to rise, with towns as high north as Chersky and Srednekolymsk reporting fires getting really close and threatening power lines #wildfires2020 #wildfires2020Siberia pic.twitter.com/cJtVbxrKox

Another factor this year was the lack of snow. With an unusually warm winter, less snow built up across parts of the Arctic, and with a warm spring, much of it melted away sooner than usual. “The snow is very reflective of the sunlight,” said Meier. “This year, the snow went away earlier, so then you have the bare ground that can absorb more solar energy.”

The warmer ground also dries out in the heat. With less moisture, there is less evaporation that can cool the surrounding air. “The drier ground and the air over the top of it makes it more susceptible to rapid warming when you have the right conditions like we’re seeing now,” Meier said.

For Siberia’s heat wave, past may be prologue. Last year, amid temperatures that were 14 degrees Fahrenheit above the long-term average for the region, forest fires burned over a near-record area, sending choking smoke into cities like Novosibirsk, Russia’s third-largest city. The plumes even reached the western United States.

Siberia also saw massive fires in 2018, 2017, and 2016. Forest fires naturally occur in Siberia and can occasionally spark north of the Arctic circle, often ignited by lightning in dry forests in summer months. But the blazes in recent years were unusually large and close to population centers. The fires burning in the region now could continue to spread as the summer season warms the region further.

One of the overarching trends behind the heat wave and the wildfires is climate change. Earth as a whole is warming up due to human emissions of greenhouse gases like carbon dioxide. But every place isn’t warming up at the same rate; the Arctic is warming at double the rate of the rest of the planet, which is why some of the earliest effects of climate change are felt in the region. The north pole also presents a window into the future for the rest of the world.

Those higher average temperatures mean extreme heat will become even more likely and more intense, exacerbating threats like forest fires as vegetation dries out. “The wildfires definitely come from the extreme heat and the dryness,” Meier said.

The loss of these ancient, slow-growing forests will release carbon dioxide into the atmosphere that will take decades to reabsorb, further warming the planet. Warming in the Arctic is also thawing permafrost, which releases even more carbon into the atmosphere.

And while it’s summer in the Arctic right now, the region has also experienced heat waves in the winter. In fact, researchers have found that in general, winters are warming faster than summers. That’s part of the reason why the Arctic is now losing sea ice at its fastest rate in 1,500 years.

Antarctica is also warming up. Earlier this year, the continent broke two high-temperature records within a week.

With average temperatures poised to rise further, more heat, thawing, melting, and fire lie ahead for the Arctic. “This year it’s in Siberia. Next year it might be in Alaska or northern Canada or it might be in Scandinavia,” Meier said. “On average, what we consider to be extreme events are going to become more and more normal.”

How long can coronaviruses survive in a closed elevator? Up to 30 minutes, study says