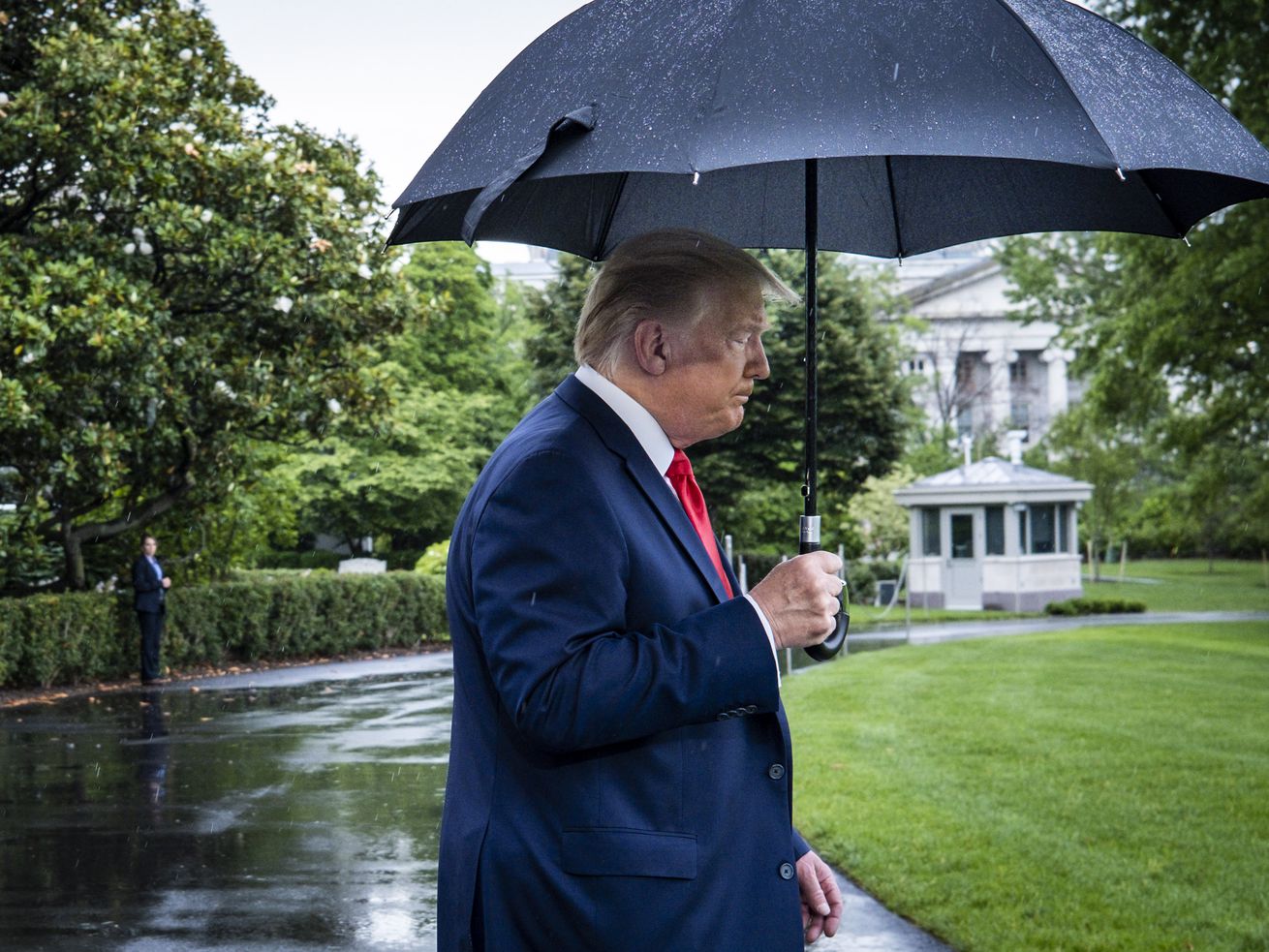 President Donald Trump walks in the rain toward Marine One after stopping to speak to the media on the South Lawn of the White House as he prepares to depart for a Tulsa, Oklahoma, rally on June 20, 2020. | Pete Marovich/Getty Images

Trump’s Arizona rally is somehow a worse public health risk than his Tulsa one.

Just a few short days after a flopped rally in Tulsa, Oklahoma, President Donald Trump is back on the campaign trail. On Tuesday, the president headed to Arizona to address a student rally in Phoenix, where coronavirus cases have begun to climb at an alarming rate.

The rally is just one part of a larger swing through the state, which is on track to be a key battleground in the general election this November. Trump started his day with a visit to the US Border Patrol station in Yuma, Arizona, where he participated in a briefing on border security.

He also visited the southern border to inspect progress on the wall between the US and Mexico. According to the White House, Trump’s visit included a “commemoration of the 200th mile of new border wall” near San Luis, Arizona.

But it is the rally itself, organized by Students for Trump and Turning Point Action, that has many public health experts concerned. It will likely be far smaller than his Saturday event in Tulsa, which saw only about a third of the 19,200-seat stadium filled. According to NPR, the Phoenix venue — Dream City Church — can hold 3,000 people.

Still, Arizona presents a particularly dangerous situation for an indoor event: Cases in the state have increased by 174 percent over the past three weeks, and the Arizona Health Department reported a record-high 3,600 new cases on Tuesday alone.

Nonetheless, the Arizona Republic reported Tuesday that the majority of the people in line for Trump’s rally were maskless, contrary to a Phoenix policy requiring them.

According to a Monday press release, Dream City Church has taken steps to mitigate the risk of the coronavirus by installing “breakthrough indoor air purification technology.” A video posted by the church’s pastor Monday claimed that the system “kills 99.9 percent of COVID-19 within 10 minutes,” though the church later clarified that statement in a Facebook post.

Those claims are almost certainly exaggerated, as the New York Times reported Tuesday: The ionization system described in the video isn’t new, and it neither works as quickly nor as effectively as the church suggested.

As Linsey Marr, a Virginia Tech expert on the airborne transmission of infectious disease, told Talking Points Memo (TPM), air purifiers “can reduce the background level, but that doesn’t help when we’re in close proximity to others.” TPM’s Matt Shuham continued:

In other words, unless every rally attendee has their own personal purification system, the church isn’t going to stop 99.9% of coronavirus, she said.

“This claim has not been demonstrated in any peer-reviewed independent forum that I am aware of,” added Jeffrey Siegel, a professor of civil engineering at the University of Toronto who specializes in air quality.

Even setting aside the church’s hyperbolic claims about the safety of attending events there during a pandemic, there are reasons to be skeptical of the venue. As Aaron Ament — previously special counsel at the Education Department and now president of the advocacy group Student Defense — points out on Twitter, “Dream City is part of the same Dream Center network that @studentlegalnet sued for lying to students at its for-profit schools.”

As the Washington Post reported last year, the network’s Argosy University chain was removed from federal student loan and grant programs after about $13 million in financial aid went missing. The scandal drove the Dream Center into bankruptcy.

The relationship between Trump’s Education Department — run by billionaire Republican donor turned Education Secretary Betsy DeVos — has also been the topic of investigation by the House Education and Labor Committee. In an October 2019 letter to DeVos, committee chairman Rep. Bobby Scott (D-VA) indicated that the department’s decision to award financial aid dollars to Dream Center schools may have been illegal.

According to the letter, officials at the Education Department were aware that two of the network’s schools were not accredited; nonetheless, the department charged ahead with releasing financial aid funds to the schools and sought to retroactively accredit them “in contravention of Department policy.”

All of that is to say, as Ament argues on Twitter, that when Trump takes the stage for Tuesday night’s rally, he and the Students for Trump group will be doing so along “with an organization that ran predatory schools that his own Secretary of Education illegally funded after they lost eligibility and accreditation and lied to students about it.”

In addition to Tuesday’s Phoenix rally, Trump’s swing-state tour will continue on Thursday this week with a visit to Wisconsin, where he will participate in a town hall hosted by Fox News personality Sean Hannity.