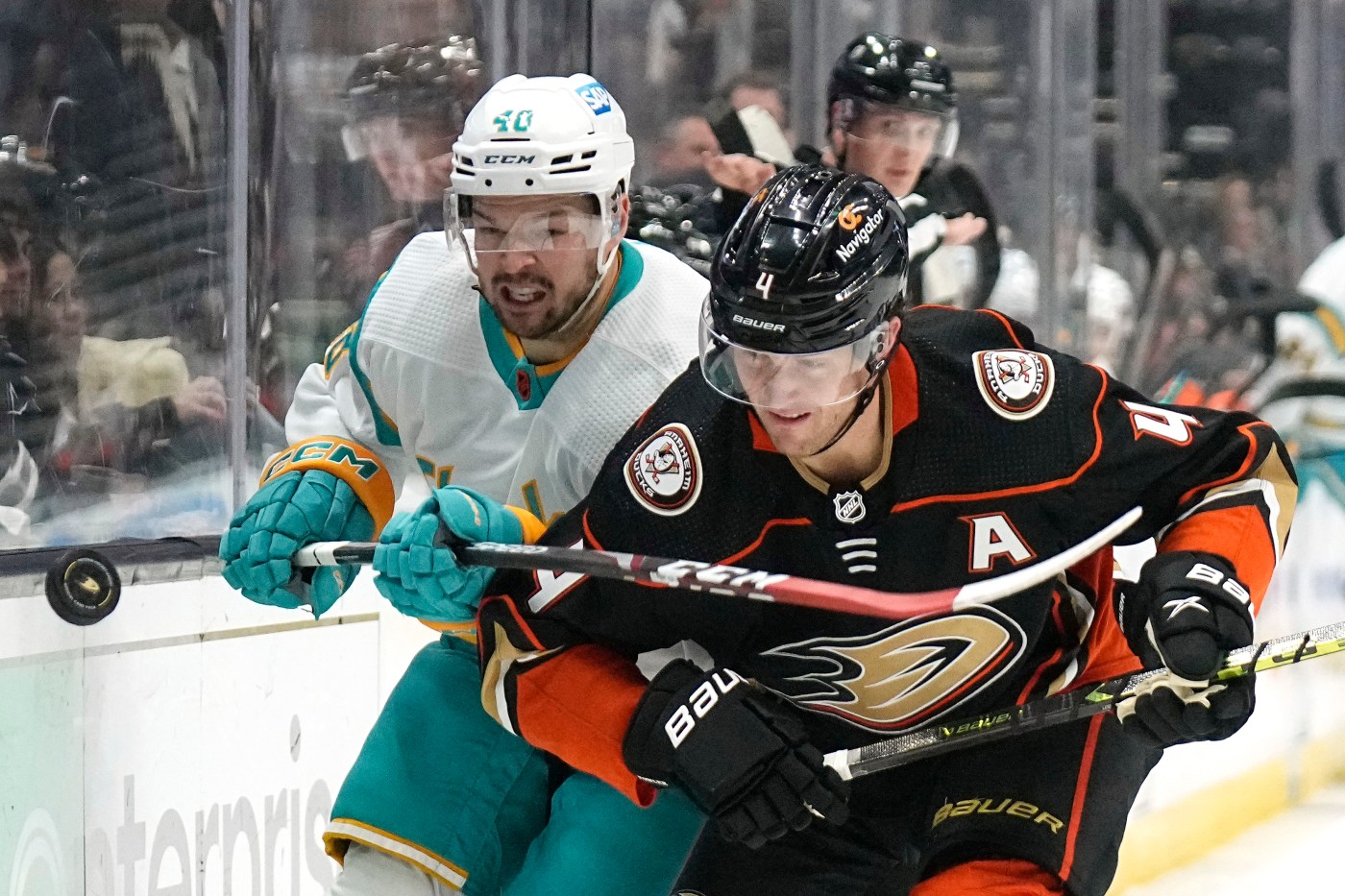 It was the type of play that all too often this season has resulted in the puck being in the back of the San Jose Sharks’ net.

With the Sharks on a first-period power play Friday, Timo Meier turned the puck over near the Anaheim blue line, helping give the Ducks a 2-on-1 the other way. Adam Henrique then slid a pass over to Frank Vatrano, but his shot from point-blank range was saved by a sliding Eetu Makiniemi.

Makiniemi didn’t stop there. In his first career NHL start, Makiniemi had seven saves in the first period and 23 for the game as the Sharks beat the Ducks 6-1 at Honda Center to snap a four-game losing streak.

Erik Karlsson and Meier both had a goal and an assist and Tomas Hertl, Matt Benning, and Alexander Barabanov all added two assists as the Sharks enjoyed their most lopsided victory of the year and improved to 1-0-2 against the Ducks this season.

“I really felt we found a balance of recognizing when the offense was presented to us and when not to force it,” Sharks coach David Quinn said. “It’s probably as good a job as we’ve done all year long in that area.”

At 23 years and 234 days old, Makiniemi is the youngest goalie in Sharks history to win in his first NHL start. Miikka Kiprusoff was the former record-holder, as he was 24 years and 164 days old when the Sharks beat Anaheim 4-1 on April 8, 2001. Kiprusoff had 22 saves.

“We played pretty well as a team, and they didn’t have very much zone time, and sometimes that can be hard for goalies,” Karlsson told the Sharks Audio Network. “But I thought (Makiniemi) stayed with it and made the saves that we needed him to make.”

On Meier’s goal, Hertl won a faceoff back in the Ducks’ zone to Karlsson, who skated forward along the wall. With two Anaheim defenders closing on Hertl, Karlsson found Meier open for a back-door tap-in for a 1-0 Sharks lead at the 10:18 mark of the first period.

“The faceoff is nice. I think (Kevin Labanc) does a good job coming up and being ready for the one-timer,” Karlsson said. “If they don’t take that away, that’s probably my first play, and when that doesn’t happen I just keep going, Timo gets open and it’s a fairly easy pass even though it might not look like it.”

After Karlsson scored a power-play goal at the 7:53 mark of the second period, ripping a slap shot past Ducks goalie John Gibson after a nice entry play by Alexander Barabanov. Just eight seconds later, Sturm took advantage of a quirky bounce off the end boards.

An entry pass by Matt Benning that was initially headed around the boards instead ricocheted toward the front of the net, where Sturm tapped it in, as Gibson was behind the net looking for the puck.

The Sharks on two occasions have scored goals seven seconds apart, with the latest one being last season when Radim Simek and Jeff Viel scored in the second period of an 8-7 win over the Arizona Coyotes.

Makiniemi got his first taste of the NHL on Wednesday, as he took over for Kaapo Kahkonen in the third period of what became a 6-5 overtime loss to the Vancouver Canucks.

Instead of going back to Kahkonen, Quinn started Makiniemi, saying Friday morning that, “we’ve got a goalie (in Makinieimi) we like a lot, and we like Kaapo a lot. But we lost the other night 6-5 and we want to give the kid a chance.”

“It’s a special moment and just really happy for him, and all the time and effort he’s put into it. But more importantly, we think we’ve got a good goalie here.”

PREGAME INTERVIEW: Friday’s game was streamed on ESPN+ and Karlsson did a pregame interview with Linda Cohn. Karlsson was asked about the persistent trade rumors that have surrounded him in recent weeks, with Cohn saying, “What do you want to see happen?”

“That’s way above my paygrade, (with) whatever happens,” Karlsson replied. “I’m kind of a day-to-day guy and you never know what’s going to happen in the future. So I’m not planning for anything.”

Karlsson, 32, now has 12 goals and 25 assists, as his 37 points remain tops among all NHL defensemen.

Last weekend when the Sharks were in Ottawa, Karlsson, whose contract carries a full no-movement clause, was asked a similar question by Sportsnet’s Elliotte Friedman: What do you want? What’s your preference?

“I want to win. That’s why I started playing this sport when I was a little kid,” Karlsson said. “I used to cry after every loss. I don’t do that anymore, but that’s what I want.

“When you’re younger, you think you’ve got all the time in the world and you don’t realize how fast time goes and I hope that I get the chance to at least have a chance at it again.”