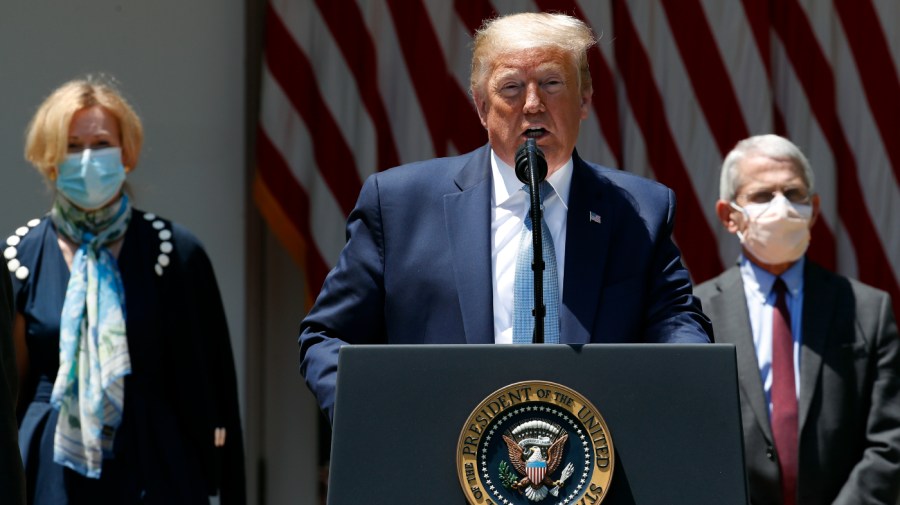 The House Select Subcommittee on the Coronavirus Crisis released its final report on Friday before Republicans take control of the House in the next upcoming Congress, providing new findings on how the Trump administration's actions negatively impacted the U.S. response.

The report from the Democratic-led subcommittee, chaired by Rep. Jim Clyburn (S.C.), highlighted the Trump White House's "failed stewardship over the pandemic
response and persistent pattern of political interference."

Clyburn also announced he will be holding a final hearing on Wednesday focused on the recommendations made by his panel.

The committee determined that the previous administration failed to adapt its response to the COVID-19 pandemic as public health experts' understanding of the virus changed — and also failed to coordinate properly with public health officials.

In particular, the report stated that the former White House's focus on certain goals got in the way of mitigating the spread of the virus, such as its emphasis on symptomatic transmission of the virus and bringing back Americans who were overseas at the start of the outbreak.

Ann Schuchat, former principal deputy director of the Centers for Disease Control and Prevention (CDC), told the panel that "a good number" of staff from various federal health agencies were focused on repatriating Americans in February of 2020, at the detriment of prioritizing viral mitigation methods.

"[W]e were trying to queue up the planning for community mitigation for — you know, in our efforts to delay the spread, we were trying to queue up the health care preparedness in terms of PPE [personal protective equipment] and reusables, and what was the strategy to get enough where we knew we didn’t have enough supply," Schuchat said. "That couldn’t get onto the agenda because most of the conversations were, how are we going to deal with this batch of cruise ship people."

Among the pandemic response measures that were neglected under the Trump administration were the development of an accurate COVID-19 test and the mobilization of supply chains for PPE early on, according to the committee.

The COVID-19 tests that were sent out by the CDC early on in the outbreak had a 33 percent failure rate, with many labs reporting verification failures by February of 2020. Despite knowledge of these faulty tests, the CDC did not stop their delivery or issue an alert on their faulty performance.

Later on the pandemic, the committee found that the Trump administration's economic relief efforts were not thorough or equitable, leaving millions of individuals at risk of losing housing and many small and mid-sized companies without the same measure of relief that was offered to large corporations.

"Just as its model, the Truman Committee, uncovered waste, fraud, and abuse of taxpayer dollars at the Department of Defense during World War II, the Select Subcommittee has acted as an effective steward of public funds, identifying billions of taxpayer funds spent ineffectively, inefficiently, or inequitably within pandemic relief programs across the federal government," Clyburn said in a statement.

"As this final report shows, in many instances, the Trump Administration’s poor management of relief programs left them particularly vulnerable to waste, fraud, and abuse," he added.

As many people and businesses went without relief, the committee found that other entities were able to profit throughout the pandemic, pointing to two online telemedicine platforms that benefitted from misinformation popularly spread by right-wing extremists.

America’s Frontline Doctors and SpeakWithAnMD.com, on which the committee opened an investigation into last year, both prescribed medications unproven to treat COVID-19 — hydroxychloroquine and ivermectin — but were lauded by right-wing figures including Trump and Infowars host Alex Jones.

The two websites "teamed up with fringe operatives" in order to reach more customer according to the final report, reaping millions of dollars from prescriptions, as well as from consultations that did not always take place.

The overarching determination by the committee was that the U.S. had long underinvested in its public health infrastructure before the pandemic. The panel called for the country to "reinvigorate" its public health capabilities by investing in new tests, treatments and vaccines.

“I have emphasized during the Select Subcommittee’s tenure that our oversight work must ultimately be forward-looking; the coronavirus crisis will not be the last public health emergency or economic crisis that we confront," Clyburn said.

When the 118th Congress meets next month, Republicans will have control over the House after winning a majority in the midterm elections. GOP lawmakers have vowed to carry out their own investigations into the coronavirus pandemic, including looking into the virus's origins and how relief funds are being used.

Republicans have made it clear that they plan to investigate Anthony Fauci, longtime director of the National Institute of Allergy and Infectious Diseases and chief White House medical adviser. Fauci, who is stepping away from government work, has stated that he has "“no problem at all” with testifying before Congress, something he has done hundreds of times throughout his career.

Azerbaijan to Evacuate Embassy in Iran on Sunday After Fatal Shooting