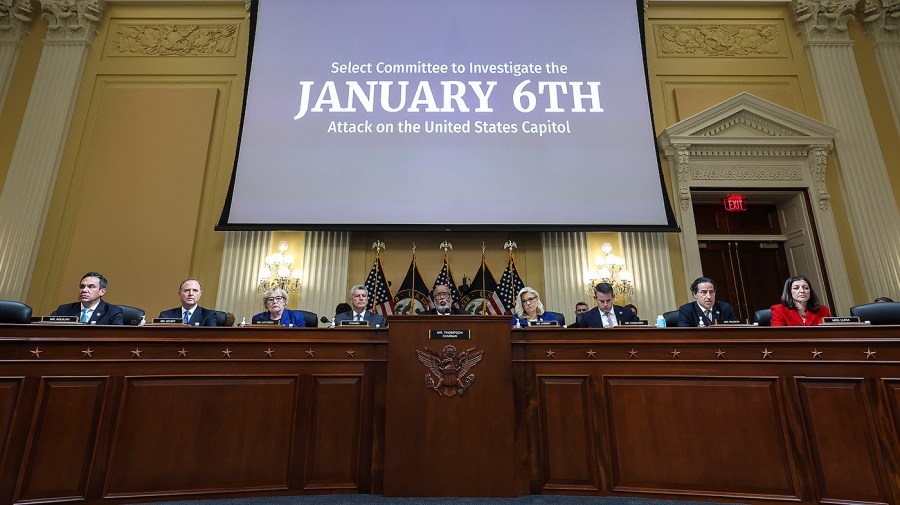 Plans from the House Jan. 6 committee to imminently release its list of criminal referrals is raising questions over how far the panel will go in implicating former President Trump and his allies in a plot that culminated in the deadly attack on the Capitol.

Chair Bennie Thompson (D-Miss.) told reporters Tuesday that the committee had come to a “general agreement” to send criminal referrals to the Justice Department.

It’s a move that would allow the panel to put a finer point on its more than yearlong investigation, naming names and detailing specific statutes that were violated in an effort they have repeatedly said was a lawless campaign to block the peaceful transfer of power.

And while it would still be up to the Justice Department to act on the recommendations, it could put pressure on a department that, at least publicly, has trailed the committee in its own review of Jan. 6.

“They stiffen the spine of state and federal prosecutors by encouraging them to act,” Norm Eisen, counsel for Democrats in Trump’s first impeachment, said of the referrals on a call with reporters.

Legal experts have for some time argued there are a number of statutes that could be used for a possible Trump prosecution, including conspiracy to defraud the U.S.

But a remaining question with respect to the committee is just how broad they will go in outlining possible illegal behavior among allies.

“This is what we're discussing as we go into the last days of our work on this important investigation,” Rep. Adam Schiff (D-Calif.), one of the committee’s members, said in a Wednesday morning interview on NPR.

“And that is, what would the impact of our referrals be if we make referrals, against whom and for what offenses?”

The Justice Department previewed the span of its investigation in a November request made public this week, sending subpoenas to local officials in three states — Arizona, Michigan and Wisconsin — asking for any communications with just under 20 Trump campaign officials and associates.

That group includes a wide array of lawyers working in different capacities on behalf of the campaign, like Rudy Giuliani as well as John Eastman, who crafted memos encouraging Vice President Mike Pence to buck his ceremonial duty to certify the election results. All were involved in efforts in seven key states where Trump lost to President Biden igniting a push by the campaign to send false slates of electors from each.

Others listed on the subpoena include campaign manager Bill Stepien, whose testimony critical of Trump’s efforts was shared by the panel, and Bernard Kerik, an aide to Giuliani in investigating the debunked claims of fraud being pushed by Trump.

How far could referrals go?

But a referral from the committee could cast a wider net, particularly in regard to those within government who assisted with Trump’s efforts. That includes then-chief of staff Mark Meadows as well as Jeffrey Clark, who Trump weighed installing as attorney general to force an investigation into his baseless claims of election fraud.

Some members of the committee have suggested the referrals could go beyond Trump alone.

“We're all very mindful of who is responsible. We have laid out in our hearings the role that the former president played in Jan. 6, and in supporting and pointing to the U.S. Capitol and telling his supporters to come out here.…That's not lost on any of us,” Rep. Pete Aguilar (D-Calif.), a member of the panel, said in an interview with CNN.

But getting it right, Aguilar went on to say, means “telling the truth and make sure that within the time that we have that we ask every available question and that we aren't shy about making suggestions and recommendations, both to protect the United States Capitol as well as to hold people accountable.”

There are a bounty of statutes Justice Department lawyers could use to charge those involved in the plot to remain in power.

A federal judge in California has already determined that Trump, in coordination with Eastman, likely committed conspiracy to defraud the U.S. as well as another crime, obstruction of an official proceeding, triggered by the use of violence.

The ruling from Judge David Carter came in a civil case in which Eastman challenged his obligation to turn documents over to the committee.

Beyond federal crimes, the Trump effort could violate various state statutes – a dynamic already seen in Georgia as Fulton County District Attorney Fani Willis conducts her own investigation into a push there to “find” additional votes for Trump and challenge the election results with faulty claims of fraud.

But top of mind for prosecutors will be whether they can successfully win a guilty verdict in incredibly high-profile cases, a feat that could be more challenging for certain statutes that require demonstrating intent.

The Justice Department also has a mixed track record when it comes to taking the committee’s suggestions.

The panel, and later the full House, voted to censure four individuals subpoenaed by the committee who they say failed to comply with their subpoenas.

The Justice Department brought cases against two of the figures – one-time White House strategist Steve Bannon and Trump adviser Peter Navarro. But it declined to do so in the case of Meadows – who did provide some requested documents sought by the committee – or Dan Scavino, Trump’s communications guru.

DOJ may want more than referrals

The decision on referrals comes after the panel formed a subcommittee of its four lawyers to evaluate the decision and make specific recommendations.

Eisen said while any referrals would likely include legal analysis and statute-by-statute recommendations, the Justice Department may be more eager to get other intel from the committee.

“The roadmap, the evidence – that's the most critical part. If I'm a prosecutor, I would much rather have the evidence than the legal analysis and conclusion that you should charge,” he said.

The committee has thus far resisted calls from DOJ to share its work, even after the panel agreed to share some 20 transcripts with investigators. Thompson said they were never turned over as the committee “just made a decision not to,” advising that DOJ would get the final report along with the public.

Schiff said that was a detail weighing on the committee.

“How much should we detail the evidence, knowing that the Justice Department has sources of evidence that we don't, that it was able to enforce certain subpoenas and compel testimony that we have not been able to?” he said.

“So in some ways, I think the information we provide will exceed that of the department. In other areas, they have more evidence than we do.”

Is your local bank going to close? Useful tool reveals if your branch will be shutting its doors