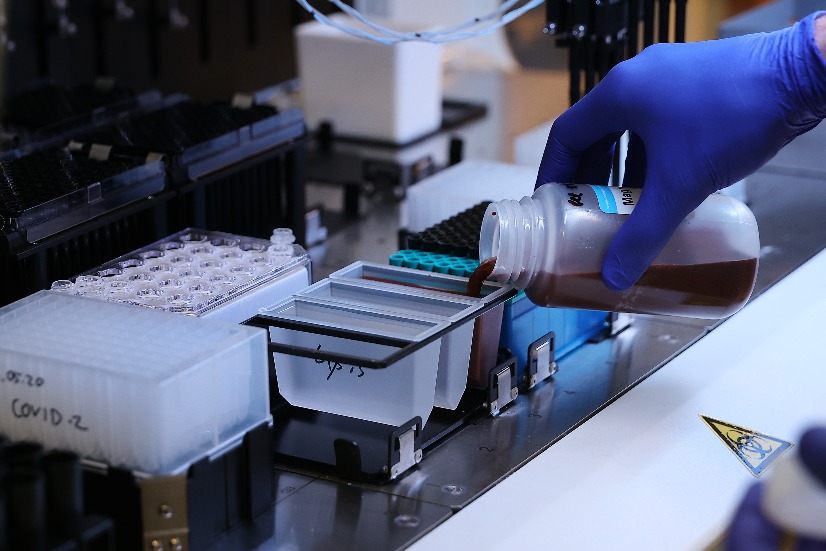 As the United States heads into its third pandemic winter, White House COVID Coordinator Ashish Jha says regarding tools: "the medicine cabinet has actually shrunk." While the rapid development of mRNA vaccines in 2020 and rollout in 2021 put the United States firmly on the map as the global leader in COVID-19 pharmaceutical innovation and global vaccine provision, this has not kept pace with continued vaccine innovation. While technology developed and proven here in the us is now used in 112 countries worldwide, there is now a risk this lead is being lost. In order not to squander that lead and the geopolitical advantages it confers, the United States needs to keep innovating. Congress must act now to fund the development of next generation vaccines.

Today, as the virus mutates to evade the protection once almost assured by hallmark mRNA vaccines and treatments, the race to develop next generation vaccines—and the downstream impacts of that technology—is quietly underway. Technologies such as mucosal entry, inhaled vaccines, or variant-proof pan-coronavirus vaccines hold promise for blocking transmission and getting ahead of continuously mutating variants. But despite decades of basic research funding, the U.S. risks falling behind foreign competitors in bringing these new technologies to market.

Take, for example, the case of the nasal vaccine developed by scientists at the Washington University in St. Louis. Based on early promising studies, Indian vaccine maker Bharat Biotech licensed Washington University’s nasal vaccine technology in 2020, started clinical trials in India in March of 2021, and completed its phase 3 trial in August of 2022, thus allowing to India to take the global-lead to approve the vaccine this September. In October 2022, the same Washington University’s adenovirus-vector-based mucosal vaccine technology was licensed by Pennsylvania-based Ocugen—however, to make the technology available in the United States, clinical trials in the U.S. are critically needed. The United States risks, as the New York Times put it, “creating a scenario in which Americans would have to travel abroad for the latest in American vaccine technology” if the status quo persists.

Meanwhile, China aims to leapfrog ahead and recently began to roll out a Chinese-developed inhaled mucosal vaccine to its population based on similar technology on a large scale. While no head-to-head comparisons with Pfizer and Moderna vaccines have been done, China is already nearing completion of a large Phase 3 trial and has begun a Phase 4 trial to evaluate post-market clinical impact of its inhaled vaccine—in other words, China may be pulling ahead. In contrast, while the U.S. has the WU mucosal vaccine ready to test in the U.S. and able to enter human trials quickly—no trials are ready due to complete absence of new congressionally-approved funding.

A U.S. trial studying the effectiveness of a mucosal vaccine’s ability to induce protective immunity at the point of entry of the virus, thus reducing infection and transmission, needs to be urgently conducted—but this is lacking in critical support. A series of new research articles undergirding the potential superiority of inhaled vaccine, here and here, showed that an aerosolized (inhaled) vaccine delivered via a nebulized form not only produced a greater antibody response than the intramuscular version, but also raised antibody levels over 9-fold, and did so at a much lower dose – important for lowering potential side events. More importantly, as Akiko Iwasaki and Eric Topol wrote in Science, inhaled vaccines also have the potential to induce a broader ‘mucosal immunity’, which could better defend against breakthrough infection, not just severe disease. This is why we need a mucosal vaccine trial funded soon.

Basic research across a range of new technologies remains strong in the U.S., but the push to commercialize these innovations is lagging. In October, researchers funded in part by US taxpayer dollars through NIH and led by Professor Iwasaki at Yale published results of a new approach to mucosal immunity called ‘prime and spike’ in Science that shows promise in reducing transmission.  NIH-funded researchers in Texas are also part of a broader research push to develop variant-proof vaccines with encouraging results in animal models published in Science in September.

“The United States and democratic nations have an inherent advantage – a robust clinical trial process with transparency that can garner global credibility that autocratic nations like China and Russia could only dream of,” says Lindsay Gorman, head of Technology and Geopolitics at the Alliance for Securing Democracy at the German Marshall Fund and a former White House advisor, “But only if we play the cards we have by aggressively running trials and rapidly producing public results – like we did with the first generation of vaccines in 2020.

“The US and China have both identified biotechnology as a strategic priority area for national competitiveness,” she says. Yet the next generation of mucosal-administered COVID vaccines have stalled in the United States.  By putting all our eggs solely into the basket of first-generation COVID vaccines, the U.S. risks falling behind foreign rivals eager to lead in Gen 2.0. There’s still opportunity for the United States to come out with the 2.0 global winner. But in the face of foreign competition, it will require investing in, expediting, and rigorously testing next generation technologies.

As Congress takes up funding proposals in the lame-duck session and early next year, the White House has requested $5 billion for new vaccines and treatments. Funding that is specifically earmarked for next generation vaccine development is an urgent priority both for the moment and for long-term US biotechnology competitiveness. Such funds should go to BARDA, but also DARPA, which was instrumental to the development of mRNA technology as well as monoclonal antibody treatments. In this next generation ‘biotech space race,’ the urgency of now to not lose our lead or let China leapfrog the U.S. in vaccine technology for COVID, flu, and future pandemic viruses is critical.

Absent dedicated congressional funding, and funding deployed very soon, the next generation of COVID vaccines to hopefully end the pandemic once and for all, may instead come from overseas and controlled by overseas countries and corporations – even if based on U.S.-origin technology. Therefore, the U.S. risks, as the New York Times put it, “creating a scenario in which Americans would have to travel abroad for the latest in American vaccine technology” if the current funding lag continues.

We cannot rest on our early achievements of a successful first-generation mRNA vaccines, that have been hailed in the first two years of the pandemic as a triumph of decades of US innovation, yet, only to see our gains slip away in year three of the pandemic as variants evade our ability to curb their spread, and thus, more resistant variants. We are only at halftime of the pandemic—let's not blow our biotech lead by resting on our laurels.

Eric Feigl-Ding is an epidemiologist and health economist, and the Chief of the COVID Task Force at the World Health Network, and faculty at the New England Complex Systems Institute.

A lifetime subscription to TransferCloud is on sale for under £60