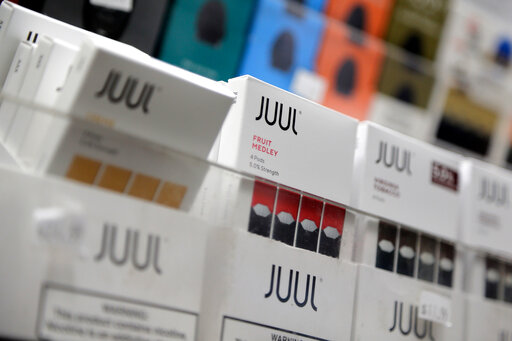 PORTLAND, Ore. (KOIN) – Oregon Attorney General Ellen Rosenblum is suing the e-cigarette company Juul Labs, Inc. The lawsuit accuses the company of violating the Oregon Unlawful Trade Practices Act and asks the company to pay up to $25,000 for each time it violated the act.

The lawsuit was filed Tuesday in Oregon State Court. It comes two months after Portland Public Schools filed a lawsuit against the e-cigarette company and three months after Juul Labs agreed to pay nearly $440 million to settle an investigation by 33 states into how the company may have marketed its products to teenagers.

Oregon was included in that settlement.

This latest lawsuit also focuses heavily on how Juul marketed and made its products available to underage consumers.

Rosenblum is accusing Juul of doing all these things.

In the lawsuit, she accuses Juul of marketing, promoting advertising and distributing its highly-addictive nicotine products to minors, despite the fact that the products are illegal for minors. She said this demonstrates the company used “unconscionable tactics” to market its goods.

By marketing its e-cigarettes as safer options than traditional cigarettes and saying they could be used to help people stop smoking, the lawsuit said the company also violated the Oregon Unlawful Trade Practices Act.

Juul is also accused of failing to disclose the fact that its products contain nicotine and how much nicotine they contain.

The lawsuit said all these examples are ways in which the company violated the Oregon Unlawful Trade Practices Act.

Attorney General Rosenblum is asking the court to declare the company is participating in or has participated in unlawful trade practices that violate the state law and that a permanent injunction be put in place that prevents Juul from violating the act in the future.

She also asks that the company be required to award a civil penalty of up to $25,000 for each instance it’s found to have violated the Oregon Unlawful Trade Practices Act.

Man slashed multiple times in the face in the Bronx, police say

How bald eagles really sound (it's not like in the movies)