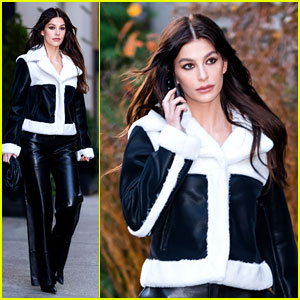 Camila Morrone is making the sidewalk her runway in these new photos!

The 25-year-old actress looked so chic while stepping out on Monday afternoon (December 5) in New York City.

Camila has been enjoying the single life for the second half of 2022 after her split from longtime boyfriend Leonardo DiCaprio. They were together for more than four years.

Next up for Camila is the release of her upcoming musical-drama series Daisy Jones & The Six, which also stars Riley Keough, Sam Claflin, and Suki Waterhouse.

The upcoming Prime Video series follows “the rise and precipitous fall of a renowned rock band. In 1977, Daisy Jones & The Six were on top of the world. Fronted by two charismatic lead singers — Daisy Jones (Keough) and Billy Dunne (Claflin) —the band had risen from obscurity to fame. And then, after a sold-out show at Chicago’s Soldier Field, they called it quits. Now, decades later, the band members finally agree to reveal the truth. This is the story of how an iconic band imploded at the height of its powers.”

Dershowitz: Here's how the House can help find Supreme leaker