LOVE Island host Maya Jama has opened up about the struggles she’s faced making it to the top in the TV industry.

She shared a heartfelt statement from pal Emily Atack that claimed Maya’s had to work “10,000 times harder than her white and blonde co-stars” to achieve the same levels of success.

Maya, who has Somali heritage, appeared alongside a trio of blondes – Holly Willoughby, Fearne Cotton and Laura Whitmore – for the final ever episode of Celebrity Juice.

Next to a picture of the foursome smiling together behind the panel, Emily heaped praise on 28-year-old Maya’s impressive work ethic.

The comedian wrote: “do you know how much of an achievement it is that Maya is sat with these lovely ladies without being blonde + white? This is how I know the girl is working ten thousand times harder than we think she is and why she’s the only public figure I give love to on the regs. 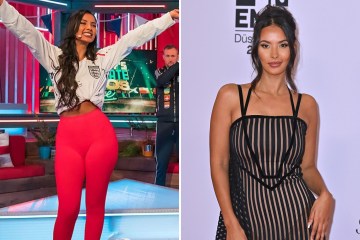 Maya shared the note on Instagram and followed it up by writing: “One part of my spoken word intro goes ‘they fill my cup, I fill your cup – that’s how we’re supposed to live’.

“I think about the amount of s**t I’ve been through just for being my non-famous no-one self trying to get representation at my day jobs in the past and I mentally say a prayer for people in the industry doing the same.

“This is bigger picture s**t. It’s not about getting a response from a celeb – it’s about being able to see the movement while it’s happening.”

She placed Fearne, Holly and Laura’s handles inside a love heart to show she held no animosity towards them and was making a wider point about the industry in general.

Maya recently landed one of the biggest presenting roles in UK telly as the first non-white host of Love Island.

The return of the beloved winter version of the show will happen in the New Year with a fresh batch of Islanders heading to South Africa.

Before Maya jets off to meet them, she has decided to perfect her smile.

Sharing a video to her Instagram story, Maya said: “So here I am back at it again, attempt two at Invisalign.

“The messed up thing is if I did it when I got them six months ago I would be half way there but we go back to the beginning.

“I never actually noticed my teeth until other people did which is kind of f***ed up so I’ve been rebelling fixing them or straightening them cos they’re not fixed.”

Google Plans to Add Conversational AI to Search Within Weeks