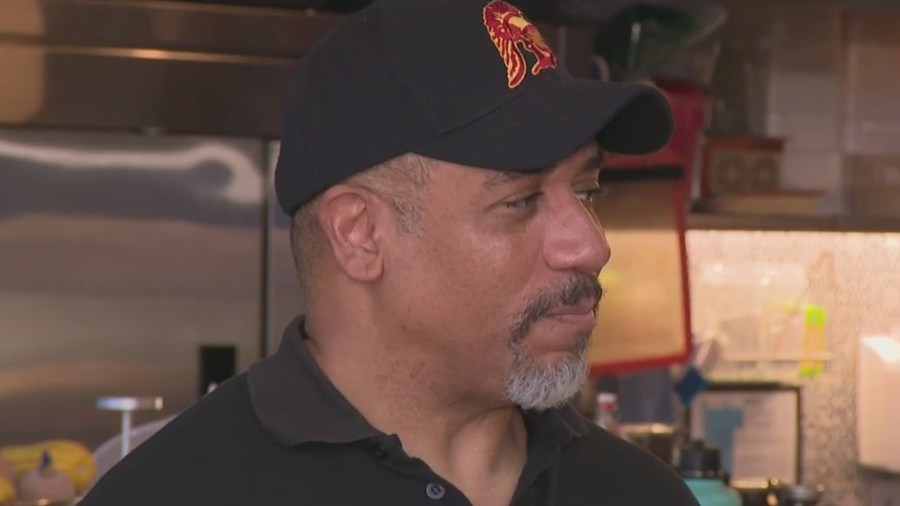 HARLEM, Manhattan (PIX11) -- Russell Jackson is fighting to keep his Harlem business on Frederick Douglass Boulevard afloat. His business was vandalized and robbed. Now his community is coming together to help save this much-loved restaurant.

Like many other businesses in Harlem, Reverence struggled to stay open during COVID. But Jackson said because his Harlem community believes in him, he never gave up, and now he’s asking for help to remain open.

He’s an Iron Chef America, a former contestant on a hit reality show, and now the owner of a Michelin-nominated Harlem Restaurant called Reverence. Everything is locally sourced and grown here. He describes it as California-inspired vegetable-forward with seafood. Jackson opened up this restaurant in Aug. 2019. He survived the pandemic, then took a devastating blow when three weeks ago, there was a break-in.

Jackson said the intruder stole all his computer equipment, worth thousands of dollars and was never caught. But Jackson didn’t give up. Instead, he worked harder and said everything changed when he posted his struggle on social media—calling a rescue rally online. His neighbors rallied around him, including the Instagram page Save our Storefronts.

His restaurant is in a 150-year-old historic location with ties to Harlem’s rich arts and music legacy.

A board member of One Fair Wage and the Women's Health Education and Development company in the South Bronx. Also, a Special Advisor to the Independent Restaurant Coalition.   Jackson prides himself in being a small business owner who promotes fine dining with a touch of community, culture and soul. He planted this Meyer lemon tree when he first opened it. Unfortunately, it was damaged during the break-in. Now you can see it’s sprouting again. A sign he hopes that customers will come back.

Jackson said his eventual goal is to open even more restaurants here in the Harlem community. To help, go to https://gofund.me/2e03af77.

How the Jordan Poole blueprint resides in Klay Thompson