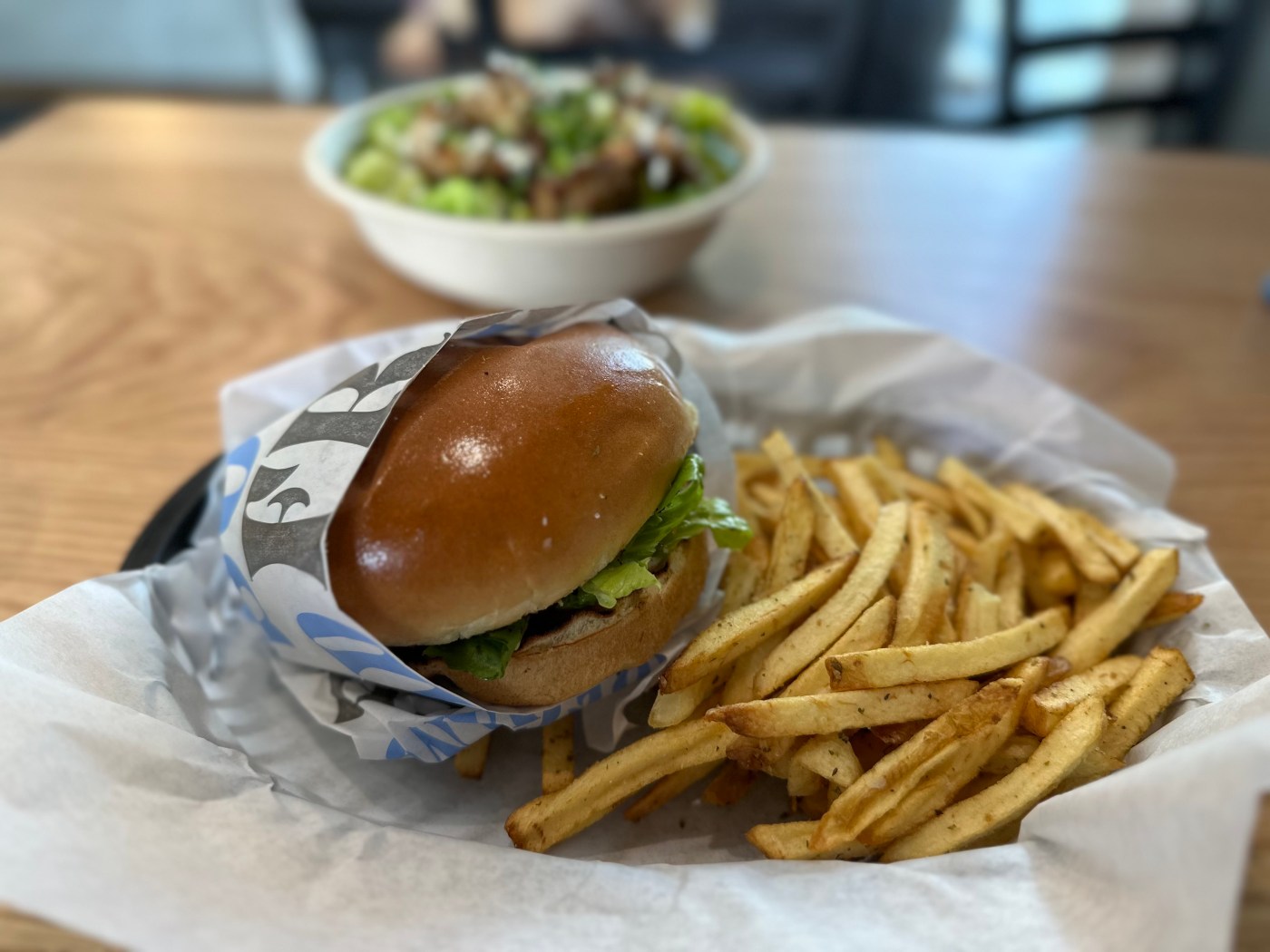 Chipotle Mexican Grill may have been the fast-casual restaurant concept forerunner, providing diners on the move with something fresher and usually healthier than fast-food alternatives and more quickly than casual table-service establishments, but the trend has shown no sign of slowing down. Marin County newcomer Nick the Greek Souvlaki & Gyro House is among a trio of restaurants that recently opened at Novato’s Vintage Oaks Shopping Center. This also includes the fifth location of ALOH-O Poke and Tea, and a Chipotle Mexican Grill that relocated from downtown Novato in July.

Marin’s first Nick the Greek, a 47-unit California restaurant franchise chain with more opening by the day, including outside the state, fills a Greek cuisine void in the county that Novato resident and franchise co-owner Sam Zeidan was inspired to fill. He had his first gyros at Novato’s annual Memorial Day weekend Greek Festival when he moved back to Marin 13 years ago. “I would go year after year,” he says. “There was such a long line that I wondered why we don’t we have these available all the time?”

The original idea behind the Nick the Greek franchise also surfaced from a sense that the pleasures of Greek food need to be more accessible. Its founder Nick Tsigaris is not one individual but three, all cousins with the name that are referred to as Baby, Little and Big Nick.

The youngest returned home to San Jose after a trip to Greece and was determined to address a dearth of the real deal gyros he’d become accustomed to in the Mediterranean country. So, in 2014, the cousins and second-generation restaurateurs opened their first in San Jose and are now approaching 80 with new locations opening soon in Nevada, Kansas, Arizona, Texas and Utah.

Zeidan’s parents, Nick and Mary, opened their first café at the Northgate Mall after moving the family from San Francisco to San Rafael when Sam was a young teenager, and they owned Mary’s Place in downtown Novato for more than a decade before retiring four years ago.

The extended Tsigaris and Zeidan families formed a restaurant industry friendship, so it was natural that when Zeidan was considering Greek restaurants options that the Tsigaris family would encourage him to open a Marin franchise. Sam’s business partner is his cousin, Zee Zeidan, who also co-owns and operates Nick the Greek locations in Vallejo, Napa and Vacaville.

Souvlaki (skewered meat or vegetables) and gyros (meat shaved from a vertical rotisserie) are served in pitas, bowls, salads and on plates and incorporate beef, chicken, lamb, pork, falafel or mixed vegetables.

Fries are seasoned with salt and oregano or topped with feta cheese, garlic and green onion with the option to add spicy yogurt and a choice of protein.

A handful of tables line the walls, one of which is blazoned with the menu’s ingredients, and there are a few outside, but the restaurant open from 11 a.m. to 9 p.m. daily is more oriented to takeout. Find additional details at nickthegreeksj.com or call 415-895-2620.

The demolished Vintage Oaks Shopping Center building that was formerly a Chevys Fresh Mex also now houses the fifth fast-casual ALOH-O poke restaurant owned by sushi chef Jerry Zhang and his wife, Jasmina Luo. They opened the first four years ago in Terra Linda with an intention to break the stereotype of fast food with the poke bowls they tout as fast, tasty, colorful, customizable, nutritious and convenient.

Their latest venture, ALOH-O Poke and Tea, has the same poke and boba tea menu as their three-year-old Petaluma location. The one-year-old Mill Valley outpost also offers sushi; Santa Rosa that debuted in 2020 has sushi, sides and bento boxes; and their original in San Rafael has it all plus ramen.

The restaurant also has a selection of milk and fruit-flavored teas and Japanese snacks.

All three restaurants are at 128 Vintage Way in Novato. Opening next at the shopping center are Crumbl Cookies, Sourdough & Co. and Dave’s Hot Chicken.

Leanne Battelle is a freelance food writer and restaurant columnist. Email her at ij.lbattelle@gmail.com with news and recommendations and follow on Instagram @therealdealmarin for updates on the launch of The Real Deal Marin restaurant search guide.

‘Spoiler Alert’ Takes an Uneven Look at Love and Loss

Today24.pro
In the age of megachurches, communion has become a big business Why the power grid is an 'attractive target' for domestic terrorists: report Hans Niemann in the sole lead at the 3rd El Llobregat Open The Darkest Secret and Tragedy of Edwin Valero