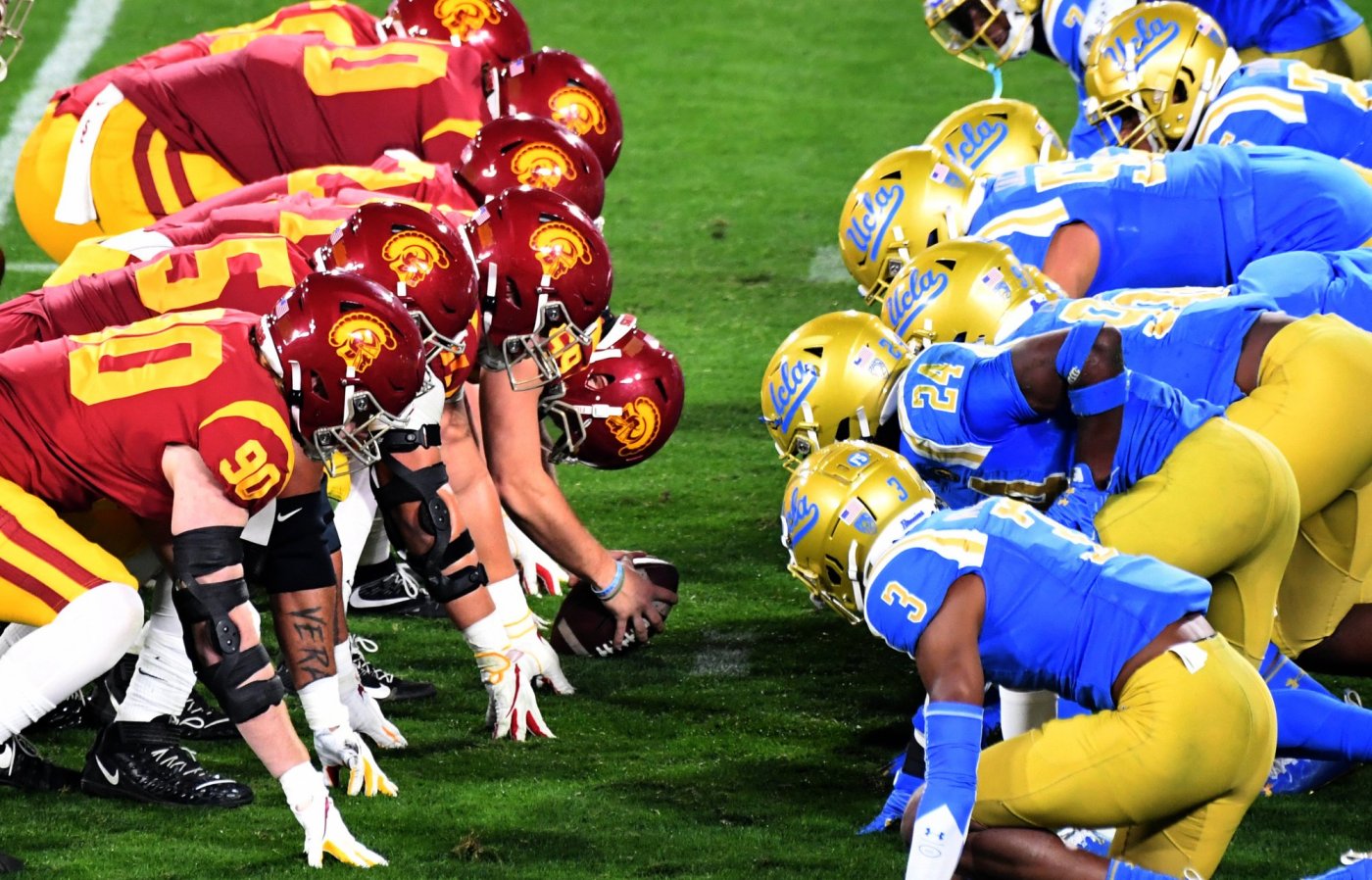 LOS ANGELES — The 90th game in the crosstown rivalry series between No. 16 UCLA and No. 7 USC was declared a sellout Tuesday, with 70,865 fans expected in attendance Saturday at the Rose Bowl.

“Any time you play in front of 70,000, that is awesome,” UCLA receiver Jake Bobo said. “That’s what you dream about as a kid. That’s why I came out here to play games like this.

“I’ll tell you that 100% of the guys in that locker room feel the same way. We are excited.”

UCLA announced that four of the 12 tarps at the stadium will be removed for the Pac-12 Conference game. Those banners were sponsored, with two having the UCLA Health logo and two having the logo of Jordan Brand, with whom the football team has an apparel partnership.

The Rose Bowl will still have a chunk of the seating on the north and south ends covered with four tarps, each holding a letter to spell out U-C-L-A. Those tarps are being left up for “stadium branding,” according to the university.

The removal of the four banners adds an additional 17,695 seats after the first seven home games of the season were limited to a maximum capacity of 53,170.

The Rose Bowl has had the ability to seat “well over 100,000” fans but the UCLA athletics website still lists the stadium’s capacity for football games is 91,136 (before tarps were added).

UCLA announced it expects to have 16,700 students at the game, creating its largest student section. USC was given 6,500 tickets, according to UCLA.

Regardless of the seating chart this year, it will be drastically different from the rivalry game’s attendance the last time it was played in Pasadena.

The Bruins and the Trojans played at the Rose Bowl in 2020 without a crowd because of the pandemic, which shortened the season to just seven games that year.

In 2021, UCLA’s nonconference upset over a ranked LSU team was the last time the Rose Bowl was near capacity (68,123 in attendance) with six tarps in place on the north end. UCLA had offered free tickets to all of its students and local high school students.

UCLA just announced the attendance for the football game against LSU at the Rose Bowl was 68,123. pic.twitter.com/Ll0Sqc7oFo

The Bruins continue to hold true to the team’s philosophy of not allowing one game to be any bigger than the other despite Saturday being a rivalry game.

“We go into every game the same way and being 1-0 that week,” UCLA receiver Kam Brown said. “You hate losing because it hits home, because you put your all into this game, so coming out with the loss hurts but it’s something you learn from and focus on to build from it.”

The Bruins are coming off their second loss of the season, 34-28 to Arizona at home, and want to get back to their winning ways against USC.

Quarterback Dorian Thompson-Robinson and the Bruins beat the Trojans 62-33 at the Coliseum last season.

“The blessing is that it is this (USC) game that comes after that (Arizona game),” said Bobo, who joined the Bruins this offseason as a transfer from Duke. “I think we would be talking a little bit more about turning the page if it wasn’t for this game. … It’s hard not to get up for this game, so even coming off a loss the guys are excited and ready to go.”

Thompson-Robinson was unable to complete a pass to Bobo in order to win the Arizona game as time expired.

“It’s going to stay with me a little while,” Bobo said. “Obviously, I would’ve loved to have made that play. … If the ball touches your hands, you have to catch it.”

The loss to Arizona bumped the Bruins (8-2 overall, 5-2 Pac-12) out of the College Football Playoff discussion.

The Bruins can pay that loss forward and place a similar blemish on USC’s résumé and remove the Trojans from the playoff discussion as well.

Bobo, like all of the transfers that joined the two teams this past offseason, will experience the Southern California rivalry game for the first time. He spent the first four years of his college career at Duke and has been able to draw parallels between the two programs and their respective rivals.

“I have a general disdain for SC just from being here a couple of months because that’s what you’re supposed to do,” Bobo said jokingly. “Just like going back to do Duke and North Carolina, there were guys that played together in high school so there wasn’t really a hatred, but the fan bases get after it a little bit. So I’m excited to see how that plays out, but I don’t think having an abundance of transfers on our roster will really impact how we feel going into this game.”

As the end of regular seasons draws near, semifinalists for various awards have started to be announced.

UCLA’s offensive line was named one of nine units recognized as semifinalists for the Joe Moore Award.

“There’s more of us than anybody else on the field,” Gaines II said. “The communication and time that goes into it and the preparation, and being able to have five people on one page, is something that’s really beautiful.”

The award is presented annually to the best offensive line. Georgia, Oregon and USC’s units were also named as semifinalists.

Thompson-Robinson was named as a semifinalist for the Davey O’Brien trophy, which goes to the top quarterback in the country.

UCLA long snapper Jack Landherr IV was named a Patrick Mannelly Award semifinalist. The award is presented to the top FBS senior long snapper. Landherr is in his fourth year with the program and has snapped in 28 games, including all 10 games this season.

UCLA running backs coach DeShaun Foster was also named as a nominee for the Broyles Award, which is awarded to the top assistant coach.