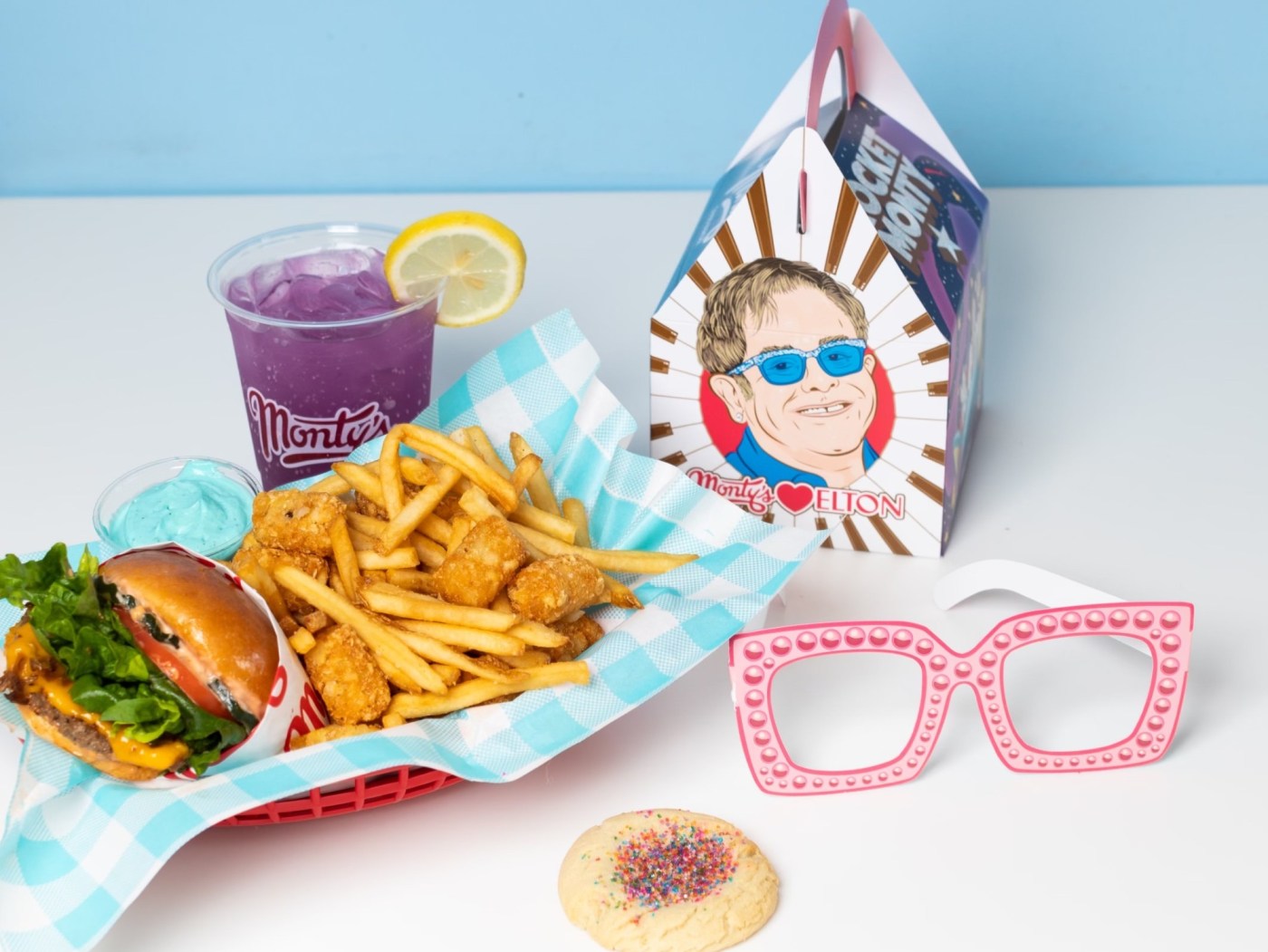 Monty’s Good Burger has created a combo meal designed to send Elton John off in style as the rock icon performs what are billed as his final shows in North America at Dodger Stadium this weekend.

“Monty’s Elton” Meal has the blessing of the Rocket Man, according to Monty’s co-owner Nic Adler, who said in a phone interview that John’s representatives were filled in on the concept.

John made rock history with his first concert at the stadium in October 1975, when he performed in a sequin-covered Dodger uniform.

“Elton and Dodgers is about as classic a concert as we do here,” said Adler. “Elton’s obviously not from L.A., but it’s L.A. history, and for Monty’s, we’re just in love with L.A.”

Monty’s meal strives for the same kind of flash. It even includes edible glitter.

The combo comes a special box that resembles McDonald’s recent “adult Happy Meal.” Its illustrations show John riding in a rocket with Monty, the chain’s shaggy dog mascot, to beat L.A. traffic and get to Dodger Stadium in time for the concerts, which take place Thursday, Saturday and Sunday, Nov. 17, 19 and 20.

The box includes a cheeseburger made with a plant-based Impossible meat patty; a side of tater tots and fries with ranch dressing that’s dyed blue; a special pink lemonade named after John’s 1971 hit “Tiny Dancer” and a glittery sugar cookie. Other fun items include a pair of paper glasses, honoring John’s fondness for eyewear, and a placemat for dine-in customers with cartoons and word games. Guests get crayons to color it, Adler said. The cost is $24.99.

Monty’s also created a Glitter Glasses Shake with oat-based milk and an English Toffee flavor that goes for $9.

“In the end, Monty’s is about fun,” Adler said. “Please don’t take us seriously. Burger, fries and shake are happy food. We want you to laugh.”

But Monty’s has a somewhat more serious side. It’s a plant-based chain designed to give people a burger fix without eating meat.

Adler said his business partner reached Elton John’s inner circle, including the rocker’s husband David Furnish, through Monty’s co-founder Lexie Jiaras. But Adler has his own connections to the music industry. He is co-owner of the Roxy Theatre on Sunset Boulevard with his father, producer Lou Adler.

Nic Adler has put in several years as the culinary director of the Coachella Valley Music and Arts Festival, where Monty’s got a boost as a startup in 2018. It has also been a vendor at the Stagecoach Country Music Festival, which is at the same venue in Indio.

Monty’s has three locations in Los Angeles, including one near Dodger Stadium in Echo Park. It also has locations in Culver City and Riverside. The Monty’s Elton Meal will be on sale through Dec. 11, according to a news release.

Echo Park may be the closest Adler gets to the farewell concerts.

“I am on the hunt for tickets,” he said. “Tickets did not come with our collaboration!”

Wheat pennies could bring you a pretty penny