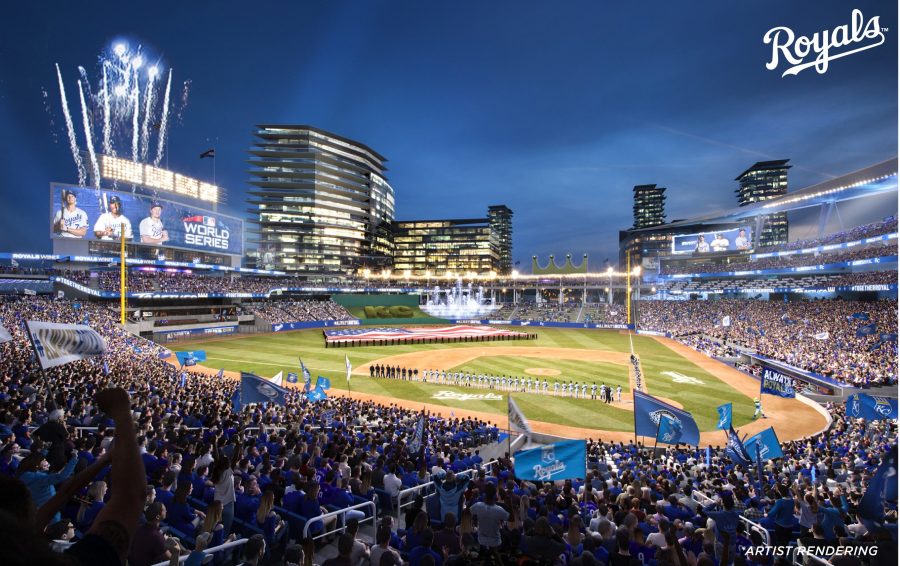 Royals Chairman and CEO John Sherman penned a letter to Kansas City and fans saying the team is building a new ballpark district and are looking at options in downtown Kansas City or close to it.

Sherman said it has become difficult to maintain Kauffman Stadium, which opened in 1973. When the team's lease with Jackson County ends in 2030, the stadium will be over 60 years old.

"The renovations required at The K to achieve our objectives would cost as much or more than the price tag to develop a new ballpark," Sherman wrote. "A new home would be a far better investment, both for the local taxpayer dollars already supporting our facility and for the Kansas City community."

Where would a new downtown Kansas City Royals stadium go? And who would pay for it?

One year ago, Sherman and the Royals said they planned to look into a downtown baseball stadium. Speculation has been ongoing ever since about where the team would land, and Royals fans have weighed in on both sides of the matter.

Sherman said Tuesday the team now has "several leading locations under close consideration, both in downtown Kansas City and close to it."

The team released new renderings of what they imagine the new stadium could look like some day. The Royals also released several criteria on what they're looking for in a new ballpark district.

Sherman said the team has two guiding principles in its stadium planning:

"First we would no ask Jackson County citizens to contribute any more tax dollars than you already do today. Second, we want to take these steps together, with your input and engagement, as a community."

Sherman said building a new stadium would be the largest public-private development project in Kansas City history, projected at $2 billion. The Royals expect the ballpark's construction would create 20,000 jobs, $1.4 billion in labor income and $2.8 billion in total economic output.

Additionally, the team expects the first year of the new ballpark would drive $185 million more in regional economic output than Kauffman Stadium does now. Sherman said the ballpark could create more than 600 new jobs and spending will drive over $60 million in tax revenue over the first decade.

Sherman said the Royals will hold a listening tour over the next several months and begin a discussion with local, state and federal officials on funding.

The Royals CEO said transparency will be a "guidepost" in the planning process.

"From the Royals World Series Championship teams of 1985 and 2015, to the Monarchs and the Negro Leagues Baseball Museum, and to your support and dedication throughout the decades, our city possesses a rich baseball history," Sherman wrote. "If this proposal moves forward, we see this development as another storied chapter for Kansas City."

Here is the letter from Sherman, reading in part:

To our dedicated Royals Fans and the Kansas City community:

I am reaching out to you on two fronts. First, I want to thank you for your support this past season. While we were not satisfied with out results on the field, the future of our baseball club under the leadership of J.J. Picollo and new manager Matt Quatro holds great promise. Our objective is to return to form and compete for a championship on behalf of the great fans of Kansas City.

Second, as we look to the future, I want to share with you our perspective on Kauffman Stadium, our treasured home for the last half century. We have enjoyed many exciting moments togethers at the Truman Sports Complex over the years. In the spirit of Ewing Kauffman, our current mission I sot look ahead to ensure that Major League Baseball and the Kansas City Royals will thrive in this region for decades to come.

Following Mr. K’s original vision for the franchise, we also want to ensure that we have a world-class ballpark that stays competitive with our peers nationwide and best serves our community to the fullest. Kansas City is evolving into a leading sports destination – demonstrated by the NFL Draft, the KC Current’s new stadium, the World Cup – and much more yet ahead. These developments, along with a new KCI airport terminal, are transforming our region.

As you may already know, it’s become challenging to maintain The K. When its current lease with Jackson County concludes at the end of this decade, it will be 60 years old. The renovations required at The K to achieve our objectives would cost as much or more than the price tag to develop a new ballpark. A new home would be a far better investment, both for local taxpayer dollars already supporting our facility and for the Kansas City community.

A year ago, we announced that we were undertaking a diligent, deliberate and transparent process to explore the possibility of a new ballpark district. We said we would look at various locations across the city that will allow for residential, commercial and community components. We are excited to now share that we have several leading locations under close consideration, both in downtown Kansas City and close to it.

Each site offers unique opportunities. We look forward to seeking input from the public over the coming months about our vision to best serve our residents and build on the momentum our city is experiencing. To accomplish this move, our plans will be contingent on continuing our public-private partnership and investment with multiple local jurisdictions and the State of Missouri.

Liz Cheney calls on Kevin McCarthy to condemn Trump for meeting with 'neo-Nazi' Nick Fuentes: 'I know you want to be Speaker, but are you willing to be completely amoral?'

Bjork, the Susan Lucci of the Grammys, is the early favorite to FINALLY win Best Alternative Album

Today24.pro
RoboCV: stacker robot One of The Greatest Britons in History - Joe Calzaghe I make $1,000 a month by promoting Amazon products on social media. It only takes 5 hours per week — here's how I set up my side hustle. Billionaire investor Howard Marks touts a bargain boom as interest-rate fears grip markets - and predicts a surge in companies going bankrupt