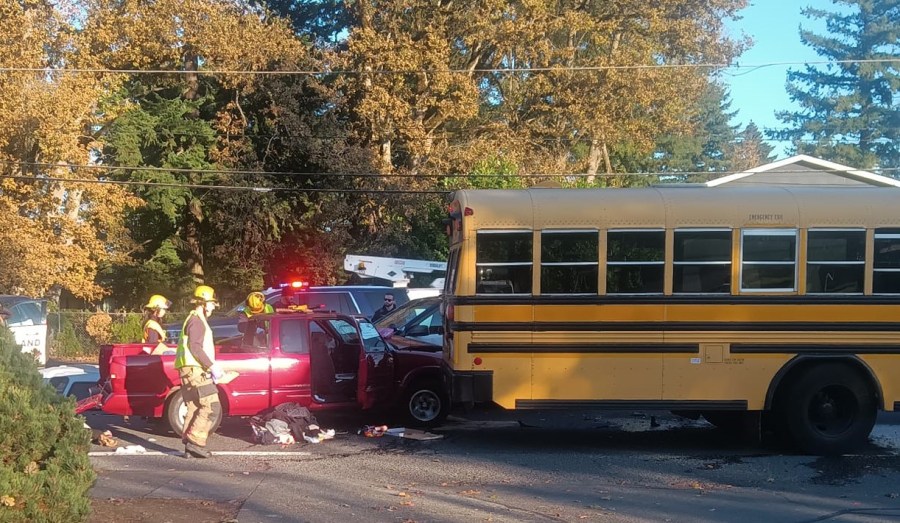 PORTLAND, Ore. (KOIN) – The driver of a pickup truck that was allegedly fleeing Portland Police in Gresham, rear-ended a school bus occupied by Wilkes Elementary School students shortly after 3 p.m. on Nov. 14 near the intersection of Pacific Street and 181st Avenue.

Portland Police Bureau spokesperson Lt. Nathan Sheppard told KOIN 6 that the driver, 56-year-old Michael Crawford, was arrested following the crash and charged with attempting to elude police, multiple counts of reckless endangerment, failing to perform the duties of a driver when property is damaged, and violating a restraining order.

“Portland officers attempted a traffic stop on the truck,” Sheppard said. “Instead of pulling over, it took off and our officers decided not to follow it. Approximately a minute later, the driver lost control and hit a school bus. No Portland officers were in the immediate area, so a Gresham [Police Department vehicle] drove into the truck to disable it after the suspect hit the bus.”

Reynolds School District spokesperson Steven Padilla told KOIN 6 News that the bus was taking children home from school at the time of the crash and that no students were injured in the collision. Witnesses on scene, however, said that the kidsQuci were visibly shaken by the crash.

The Reynolds School District issued an alert to parents following the crash. The alert stated that the families of affected students were notified “as quickly as possible,” and that some of the students involved in the crash were picked up at the scene. Other students were driven home by a replacement bus that was dispatched to the scene.

“Law enforcement and first responders arrived at the scene immediately after,” the alert said. “The students and bus driver were assessed and found to not have any injuries requiring care.  Staff from Wilkes Elementary and Reynolds School District also arrived at the scene shortly after the accident occurred.”

Wilkes Elementary said that counselors are available for students affected by the crash.

“If your child was involved in or heard talk of this bus accident and has any concerns or fears, please let the school know as we have counseling support available to help,” the school said.

The Gresham Police Department told KOIN 6 that its officers were assisting the Portland Police Bureau with an investigation in the area at the time of the crash. The Gresham Fire Department was also dispatched to the scene.

On the day of the crash, a separate announcement was made by authorities and the Reynolds School District that a Reynolds High School teacher was booked into the Deschutes County Jail for the alleged online sexual corruption of a child, attempted rape, attempted sodomy, attempted encouraging of child sex abuse, attempted contributing to the sexual delinquency of a minor, and luring a minor for sexual conduct.

'Martyr' Stewart Rhodes built himself up as a modern-day Nelson Mandela: reporter