A WOMAN who claims to be a proud catfish has shared a makeup transformation.

While she seems to think she looks entirely different all dolled up, others feel that she’s attractive with or without makeup – and her look is blowing people’s minds.

In a TikTok video, the woman, Brei, showed how she looks all glammed up.

She had platinum blonde wavy hair, and her makeup was flawlessly done.

She sported a dramatic eye look with white eye shadow, and white dots adorning the eyes.

There was highlighter in the inner corners of her eyes and the bridge of her nose as well. 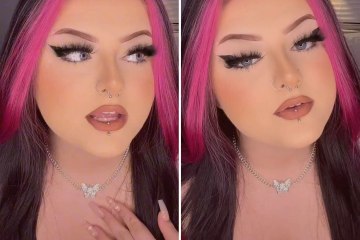 Her dramatic eyelashes and defined brows tied the look together.

Brei then cut to a clip of her bare-faced, mouthing along to the words “girl that’s not me” that played in the background of the video, insinuating that she felt she looked different with no makeup.

“I know I’m a catfish, a proud one boo,” she wrote in her video’s caption.

People in the comments section of the video asserted that despite Brei thinking she’s a catfish, she looked amazing both with or without makeup.

“You so beautiful omg,” one person wrote.

“But you look tf good,” a second added.

“She [looks] better without makeup,” a third said.

“Still beautiful either way though love.”

“Girl you not no damm catfish, you mad beautiful without makeup, and with makeup. You can pull either or.”

“Gorgeous before and after,” a final person said.

Horse racing tips: This 71-1 double can bring the house down at Kempton