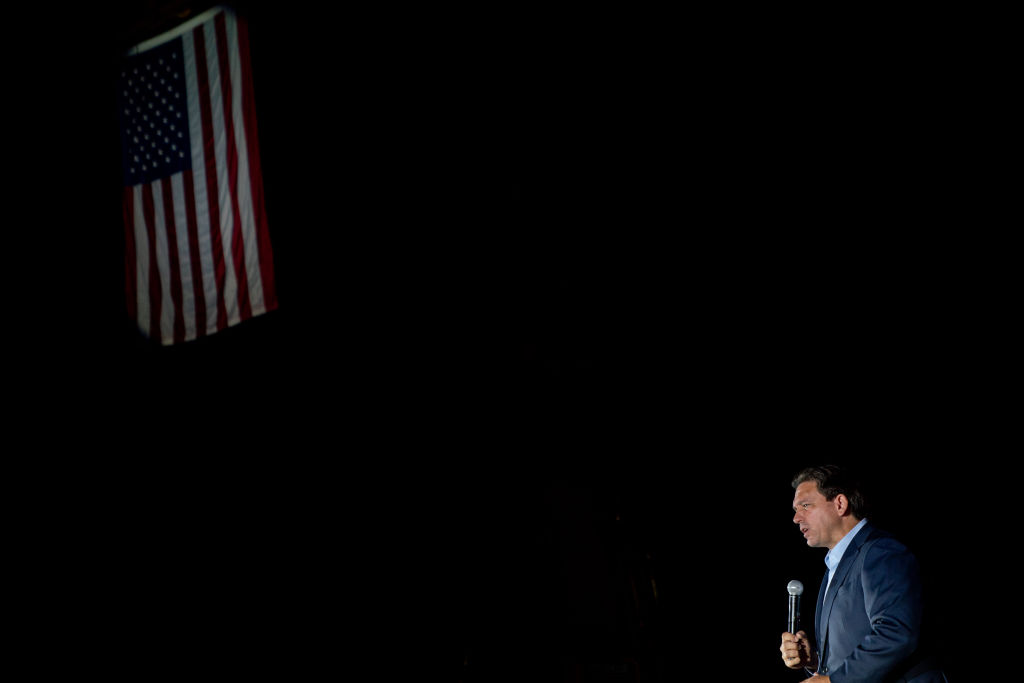 In the wake of their disappointing midterm election results, many Republican commentators are already adopting a common refrain: The party has a Trump problem, and it’s time to move on, preferably with Florida’s star governor, Ron DeSantis.

The Republican rank and file may feel similarly. New surveys taken since Election Day found that GOP voters now prefer the Florida governor over the former president in the race for 2024, and some members of Congress appear to be leaning in that direction, too. Seeing the potential threat, Trump has gone to war with DeSantis on social media, releasing a statement that derided him as “Ron DeSanctimonious” and as an “average” governor who only won office because of Trump’s past support.

But pinning all Republican hopes on DeSantis may not work for the GOP. Florida is not the rest of the United States, and DeSantis has embraced much of Trumpism himself. If voters are rejecting not just Trump, but his approach to politics, then a Trumpy alternative to Trump is no solution. Most importantly, broad and lasting success for the party will not be so simple as trading one cult of personality for another.

The election results speak for themselves. Most of the former president’s hand-picked candidates lost convincingly across the country, allowing Democrats to hold the Senate and keep the likely Republican lead in the House to a whisker. DeSantis, on the other hand, trounced Democratic challenger Charlie Crist by nearly 20 points in his reelection bid, after having won in a squeaker in 2018. He did so by winning the biggest margin ever in Miami-Dade and with record numbers for a Republican among non-Cuban Hispanics; he also increased Republican margins in the Legislature on his coattails.

For Trump’s GOP favorites, there were no such waves to be found, and in the few places where they won, they significantly underperformed.

It’s no wonder Republicans are looking toward DeSantis as they turn their attention toward 2024.

Beyond his recent win, DeSantis enjoys a perception among Republicans that he turned the previously purple state red, as well as the assumption that what works there could be successfully exported to the rest of the country. But these ideas are at best unproven, and the red wave that never arrived should teach Republicans a harsh lesson about relying on gut feelings alone.

Much of what has happened in Florida reflects its unique population dynamics combined with larger demographic trends. Arguably, DeSantis didn’t turn Hispanics toward Republicans so much as benefit from a large population bloc already turning that way — a trend, if anything, that was started by Trump.

Similarly, Florida’s population skews substantially older than most swing states, and older voters are disproportionately Republican. Florida’s 65 and older cohort represents more than 21 percent of the state’s population, the second-oldest in the country. In contrast, Georgia, which Republicans must win to make a competitive run at the presidency, ranks 47th.

There is also the potential impact of interstate migration. Trump himself moved to Florida, as have many other Republicans across the country. This phenomenon is not nearly as present elsewhere, and movement away from states like Pennsylvania to Florida may help DeSantis now while hurting his chances in a presidential contest.

Finally, there are additional factors that no doubt widened DeSantis’ lead last Tuesday. For one, Florida Democrats are notoriously bad at voter registration, but this isn’t true in other important swing states like Michigan, Minnesota and Georgia. Crist, the Democratic candidate for governor, also lost three statewide elections, campaigned with a running mate who had tried to end Florida’s popular school choice programs, and had switched parties while keeping few loyalists along the way.

The reality is, Florida is no longer a swing state, and the Republican Party there has outmaneuvered the Democrats up and down the ballot since long before DeSantis came along. Democrats haven’t won a Florida governor’s race since the 1990s, and Trump won the state twice in his presidential bids.

To be clear, DeSantis is ascending at this moment in part because he won big, and nothing cures political ills quite like victory. But Republicans should have learned their lesson by now about the perils of assuming one win will automatically lead to another — and the perils of creating a cult of personality.

Furthermore, let’s not forget that DeSantis has embraced much of Trumpism as the rest of the nation objects to it. It’s far from clear that his flavor of Trumpism (just as sharp-edged and media-driven, if far more competent and perhaps less charismatic) can have the same impact in other parts of the country.

DeSantis undoubtedly has connected deeply with many GOP voters, having made a name for himself by objecting to pandemic rules. But there are already signs that issue is fading from some voters’ memories, at least when compared with other matters. One need only look at Democratic Gov. Gretchen Whitmer’s big win in Michigan when abortion was on the ballot, even as the right had earlier raged against her Covid restrictions.

It should also be noted that DeSantis isn’t the only popular incumbent who ran a good race, and Florida isn’t a state where the GOP particularly needs a home-field advantage. Mike DeWine in Ohio, Chris Sununu in New Hampshire and Glenn Youngkin in Virginia all are Republican governors without Trumpist baggage in key states. In fact, DeWine outran incoming Sen. J.D. Vance in Ohio by 19 points, and Sununu outperformed Trump-backed Senate candidate Don Bolduc by nearly 25 points; DeSantis ran ahead of Sen. Marco Rubio by just 3 points.

Even Oklahoma conservative Kevin Stitt could be a more tested choice after winning a race some expected him to lose in the face of millions in outside spending. Either way, banking too much on DeSantis could unintentionally box out potentially strong candidates.

Of course, anything can happen, and DeSantis has proven himself to be a nimble politician if nothing else. But Republican commentators clinging to his success as the only way to win back swing voters and reclaim the White House are getting ahead of themselves.

Some of the same populist ventures that have delighted the GOP base could also turn off independents nationwide, whether that’s shipping migrants to Martha’s Vineyard, attacking the free expression of private businesses, regulating social media or tamping down on public protest. Perhaps DeSantis can pivot from his polarizing approach. Memories are also short, and President Joe Biden — should he run — is hardly a strong incumbent.

But Republicans now weary of Trump should be more cautious before stampeding to designate his successor. Swapping one cult of personality for another brings serious risks, not only for future electoral success but for the health of the republic.

Today24.pro
In the age of megachurches, communion has become a big business Hans Niemann in the sole lead at the 3rd El Llobregat Open Best Android app 2022 – Google reveals top pick for the year and it’s totally free The Darkest Secret and Tragedy of Edwin Valero