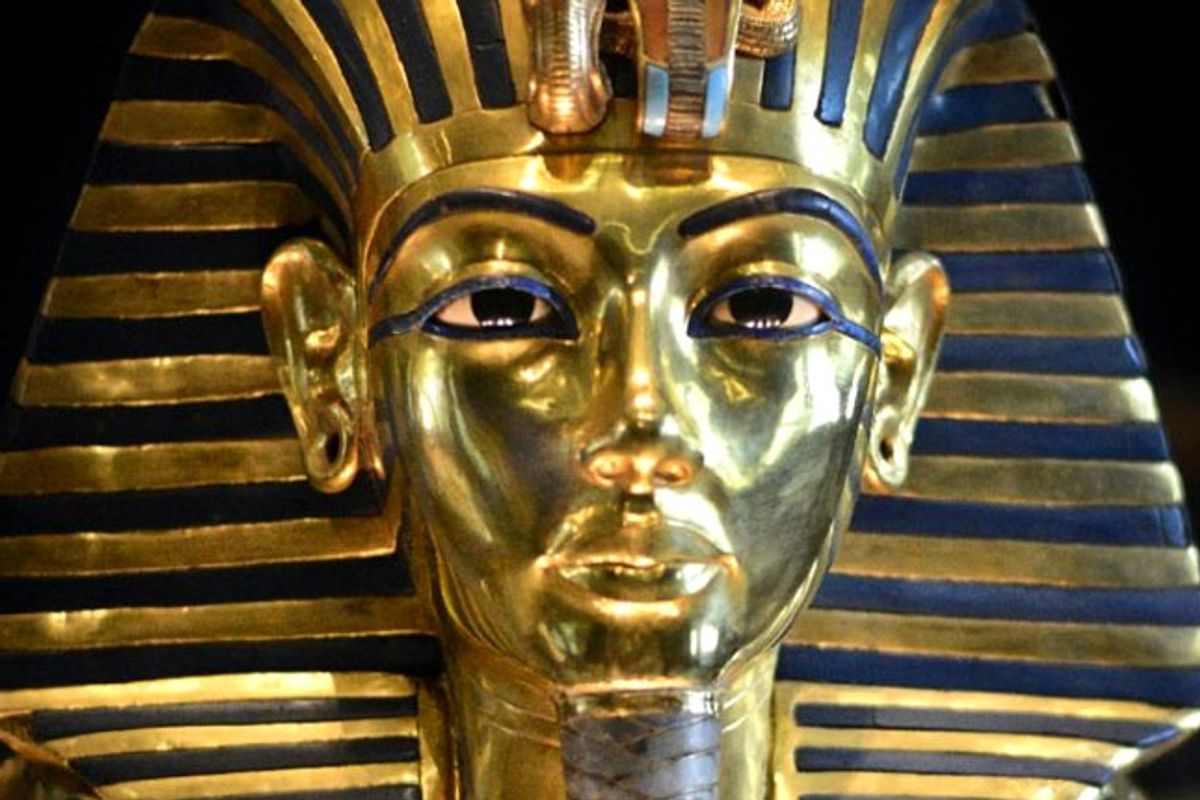 Four months after the discovery of Tutankhamun’s tomb in November 1922, the expedition’s sponsor, Lord Carnarvon, died unexpectedly, and the tabloid press in both the UK and US had no doubt what was to blame. Claims were already widespread that an engraved plaque had been found in the burial chamber, reading “Death comes on swift wings to he who disturbs the tomb of the pharaoh.” The intruders had been affected by an ancient curse, the papers said, and the Earl’s death proved it.

Evidence mounted: at the exact moment Lord Carnarvon died, the lights went out across Cairo and his pet terrier dropped dead back home in Highclere Castle. A canary belonging to archaeologist Howard Carter had been swallowed by a cobra – a symbol of Egyptian royalty – on the night the tomb was first breached. The Daily Express newspaper reported that all over Britain, people had begun donating their Egyptian antiquities to museums for fear of being affected by a curse.

The story was further fuelled a month later when American railroad executive George Jay Gould caught a cold and died shortly after visiting the tomb. Was it the curse? Or was there a more scientific reason? The Express in Britain and New York World in the US speculated that the tomb had been impregnated with ancient poisons that had somehow remained toxic for over three thousand years.

Thereafter, every death associated with the tomb made headlines. Sir Archibald Douglas Reid, who X-rayed the mummy, died the following year of an unexplained illness. Egyptologist Professor Hugh Evelyn White committed suicide and left a note saying there was a curse on him. Another team member, Arthur Mace, was a victim of suspected arsenic poisoning. Howard Carter’s secretary was smothered with a pillow in an elite gentleman’s club. American Egyptologist Aaron Ember died in a house fire. And there were more.

Lord Carnarvon’s daughter, Lady Evelyn Herbert, believed the curse story. She told the Philadelphia Inquirer that she had offered to release her fiancé Brograve Beauchamp from their engagement, since she had entered the tomb with her father and feared that Brograve might become affected by the curse through marrying her. Brograve gallantly refused, saying that if she were cursed, she needed him all the more so he could protect her.

From the earliest curses to modern conspiracies

Throughout the Bible, the Koran and the Hindu Vedas, there are stories of curses placed on those who’ve sinned. In a famous example, Cain is condemned to a life of eternal wandering after he murders his brother Abel. Curse tablets and dolls have been found in tombs throughout the ancient world, invoking deities and promising a range of psychological and physical repercussions if certain conditions are breached. Some of these repercussions were pretty dire: Dido was so furious when Aeneas betrayed her that she cursed Troy and Carthage, saying they would be forever enemies, and, according to legend, that’s what caused the Punic Wars, in which up to two million died.

The idea of curses in mummies’ tombs first took hold after Napoleon’s army stumbled across the Valley of the Kings in 1798 and looted its treasures. An early Victorian stage act involved two comics unwrapping mummies, who then came back to life. The trope was adopted by umpteen Gothic writers, who churned out stories of mummies strangling, poisoning, or possessing their victims. Louisa May Alcott wrote one in 1867 called “Lost in a Pyramid, or The Mummy’s Curse”; Sir Arthur Conan Doyle wrote one in 1892 about a reanimated mummy. As a fictional subject, mummies and curses were pure Egyptian gold.

The Grimaldis of Monaco were said to have been cursed in the 14th century by a witch who swore they would never find happiness in marriage. Sure enough, there have been umpteen family divorces in the 20th century alone, plus the tragic death of Princess Grace in a car accident in 1982. Was that the witch’s fault?

The Kennedys have lost twelve family members in tragic accidents since 1944. Of Rose and Joe Kennedy’s nine children, four predeceased their parents – including Joseph and Kick, who died in plane crashes, and John F. and Robert, who were assassinated – and the deaths continue in the 21st century. It’s vaguely asserted that someone Joe Kennedy crossed in business during the 1920s was responsible for the curse, but in that case the punishment seems disproportionately harsh.

JFK’s assassination is famously cited by conspiracy theorists, who can’t accept that Lee Harvey Oswald acted alone. Piecing together random aspects of the event in Dallas, they conclude it was a carefully planned murder carried out by the FBI/the Russians/organized crime/some other sinister force. Similarly, there are those who refuse to believe that nineteen men acting on behalf of a terrorist organisation few had heard of in 2001 were able to hijack four planes on 9/11, causing thousands of deaths. There were too many coincidences; it had to be an inside job.

We seek someone, or something, to blame for particularly shocking and terrifying events; otherwise, we’d have to accept that tragedy is the luck of the draw and we could be next.

“In the absence of perceived control, people become susceptible to detecting patterns in an effort to regain some sense of organisation,” says experimental psychologist Bruce Hood in Psychology Today. The human brain is resourceful at finding what seem like meaningful patterns in a random universe. This phenomenon has a name: apophenia. It leads some to attribute misfortunes to curses, conspiracies, past lives, ghosts or psychic phenomena, instead of accepting they are almost always the result of chance, human behaviour, or both.

So what about the ‘curse’ of Tutankhamun? Contrary to news stories, there was no warning inscribed on the walls of the burial chamber or elsewhere in the tomb. There were a few in other Ancient Egyptian sites – it made sense for priests to spread fear amongst the population to deter tomb robbers – but not here.

What accounts for all the deaths amongst those who visited King Tut’s tomb? Did the Ancient Egyptians have the technology to implant a long-lasting poison in 1323BC? None was found, but modern scientists detected a black mold that they identified as types of bacilli that could conceivably have caused congestion and bleeding in the lungs if inhaled in a large quantity – but no evidence has emerged that anyone who died after entering the tomb was affected by these particular bacilli.

Another theory was that bat droppings in the tomb could have poisoned those who visited. But the tomb was sealed and airless so no bats could have survived within. Was it a poison transmitted by mosquitoes? That argument didn’t work because there was no water in the desert, and therefore no mosquitoes.

Sir Arthur Conan Doyle, a strong proponent of the curse theory, got around these technical difficulties by saying that “an evil elemental” had caused Lord Carnarvon’s death – a claim so unspecific that it’s hard for science to disprove.

In fact, Lord Carnarvon had suffered poor health since a car accident in 1909 when he incurred chest injuries that exacerbated his asthma. In March 1923 he was bitten on the cheek by a mosquito while on a trip down the Nile to Aswan, then he accidentally nicked the bite with his razor. Blood poisoning set in and, in those pre-antibiotic days, for a man with weak health, it proved fatal. Human behaviour combined with mosquito behaviour led to his death.

The truth is that of the twenty-six people present at the official opening of the tomb, only six had died a decade later. Those who spent most time working with the mummified body lived to an average age of seventy, which was beyond life expectancy at the time. Howard Carter – the archaeologist who devoted years of his life to excavating the tomb – should surely have been the main victim of any curse but he lived for seventeen years after its discovery. Lady Evelyn Herbert, said to have been the first to crawl inside, lived till 1980.

Given the conditions in Egypt at the time, with poor sanitation, snakes, crocodiles, and swarms of disease-bearing insects, the inside of Tutankhamun’s tomb was probably one of the safest places in the country. Lord Carnarvon’s sudden death, while sad, was entirely explicable by medical science. Reporters knew all this back in the 1920s – but far be it from them to spoil a good story.

Gill Paul’s novel, The Collector’s Daughter, is about the discovery of Tutankhamun’s tomb.

This article was originally published at History News Network

A communications satellite the size of an apartment is so bright it can outshine stars, and astronomers are worried it could interfere with their research