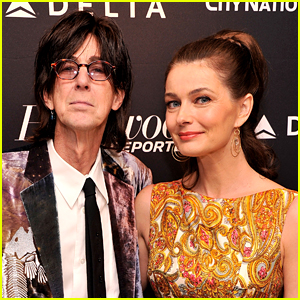 Paulina Porizkova is sharing the heartbreaking details surrounding the death of her ex-husband Ric Ocasek.

The 57-year-old model split from Ric in May 2018 after 28 years of marriage, but they were still living together at the time of his death in September 2019.

Paulina was the one who found Ric dead in his bed and she opened up about that moment in a new interview on Red Table Talk.

“He had surgery because they’d found stage 0 lung cancer,” Paulina said in a clip that was premiered by People. “And he was recovering really well. Two weeks [later], he was walking around, he was starting to feel much better, he was sleeping better. And this night, he said, you know what, I’m feeling kinda tired.”

Paulina said that she thought Ric was sleeping in the next morning, which wasn’t abnormal due to his “rockstar hours.”

After Ric‘s death, Paulina found love again with a famous writer, but they have since split.

Gedi Juozapaitis ready for homecoming with Maine at O2 Arena

Today24.pro
‘People need to stop getting mad at non tippers and start getting mad at the apps’: Lyft driver paid $50 for ride that cost $242 Five ways struggling families can get free cash to help pay for food this Christmas The Darkest Secret and Tragedy of Edwin Valero Best Android app 2022 – Google reveals top pick for the year and it’s totally free