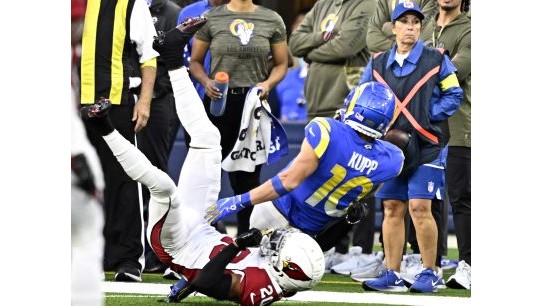 Kupp will be required to miss at least the next four games after he’s placed on injured reserve, but he’s looking at a recovery timeline of five to six weeks, according to McVay.

With the 3-6 Rams having eight games remaining in the regular season, that might be the end of Kupp’s season unless the injury-riddled Rams somehow manage to generate a winning streak, starting with Sunday’s road game against the New Orleans Saints.

Also, offensive guard Chandler Brewer sustained an MCL injury versus Arizona and will be out the next four to six weeks, and left tackle Alaric Jackson is dealing with blood clots and will be shut down for the rest of the season, per McVay.

“It’s tough, but you have to be able to see if we can continue to try to develop some of these other guys that are going to get opportunities that they wouldn’t get otherwise, McVay said.

“You never ever replace a player like Cooper Kupp, but we’ve got to figure out the best way to accentuate the skill sets of the guys who will be playing. It’s a lot of guys that we will be continuing to learn about.”

More to come on this story.

In a Wisconsin town, voters fear for America under attack

Today24.pro
‘How many Uber drivers does it take to pick up a disabled person?’: Disabled person says 3 Uber drivers canceled on them because of their service dog Crypto Lender Matrixport Raises Valuation to $1.5B Despite FTX Collapse I make $1,000 a month by promoting Amazon products on social media. It only takes 5 hours per week — here's how I set up my side hustle. Billionaire investor Howard Marks touts a bargain boom as interest-rate fears grip markets - and predicts a surge in companies going bankrupt