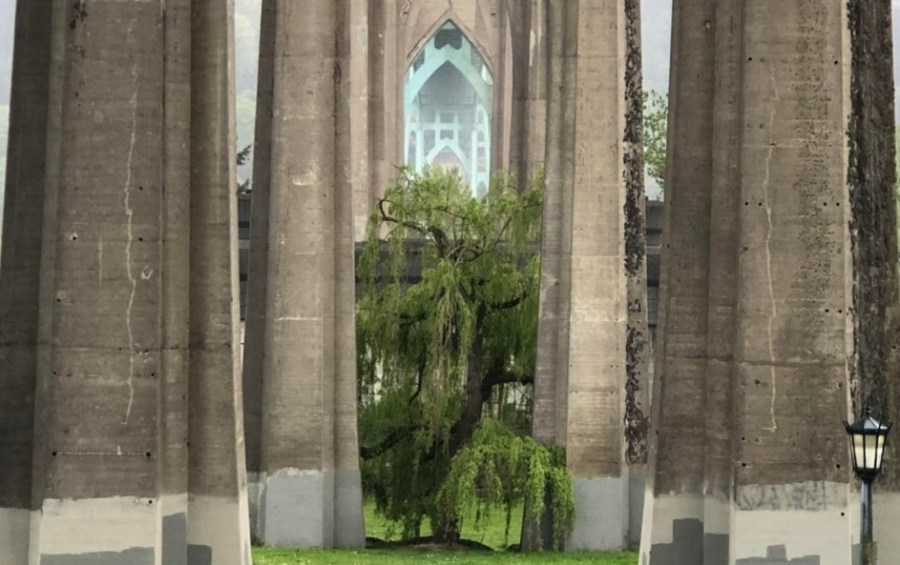 PORTLAND, Ore. (KOIN) – The willow tree that served as the backdrop for countless wedding, engagement and prom photos in Portland's iconic Cathedral Park has been cut down after it collapsed and caught fire during a windstorm on Nov. 9.

Portland Parks and Recreation spokesperson Mark Ross said that the willow was ignited after it fell into nearby power lines, which knocked out power to thousands of customers in the area. The willow was one of about 90 trees that caused issues for the city during the region’s recent wave of storms.

“The tree came into contact with high-voltage electrical wires and caught fire,” Ross said. “We understand that Portland General Electric crews alerted Portland Parks and Rection’s Urban Forestry team that the tree was failing, that there was no power to 5,000 people, and that it was essential to remove the tree.”

Crews reportedly found cracks in the soil at the base of the tree, indicating that the tree suffered root failure during the storm before collapsing into the Crawford Street power lines. Ross said that it’s the city’s policy to replace a tree whenever one is downed.

However, it’s unclear at this time if the tree, which sat in a picturesque location underneath one of the St. John’s Bridge’s iconic arches, will be replaced with another willow tree, or if the replacement will even go in the same location.

“When a tree comes out, a tree will go in, not necessarily always in the same spot, but often in the same park,” Ross said. “That is [Portland’s] goal for no net loss of tree canopy. The Urban Forestry Science, Outreach, and Planting team members will work with PPR stakeholders to determine a location for the replacement tree, and we will install it when capacity allows.”

Portland tree emergencies can be reported by calling (503) 823-TREE. Emergencies involving downed power lines, Ross said, should first be reported to the local power company, as Urban Forestry crews are unable to respond until electrical hazards have been handled.

MAQB: Baker Mayfield Should Still Have Some Suitors

Today24.pro
Five ways struggling families can get free cash to help pay for food this Christmas Best Android app 2022 – Google reveals top pick for the year and it’s totally free In the age of megachurches, communion has become a big business The Darkest Secret and Tragedy of Edwin Valero