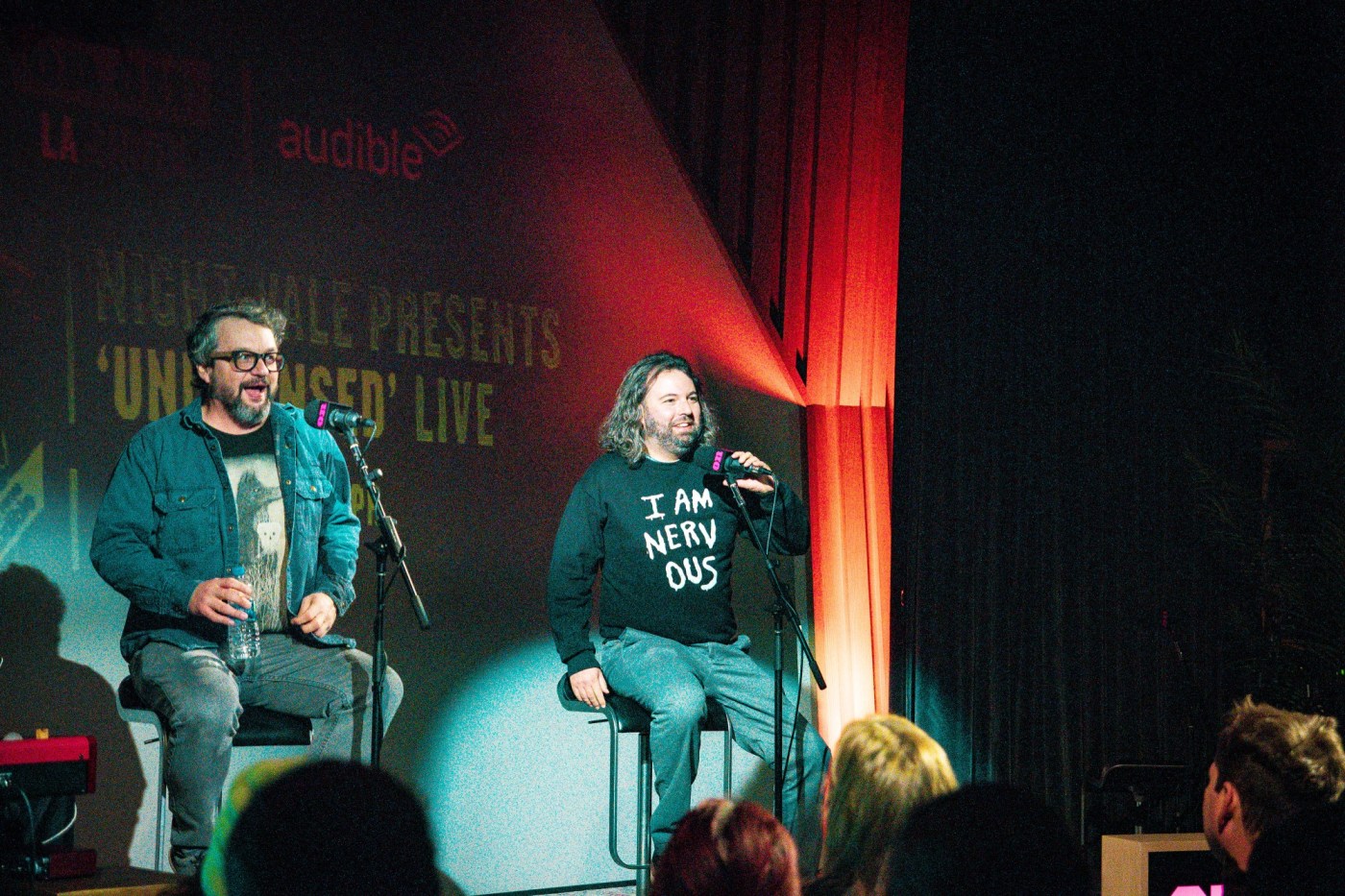 After taking their listeners on a supernatural journey through a fictional desert town on their previous podcast, “Welcome to Night Vale,” this writing team is now using the real neighborhoods around Los Angeles for a new detective noir series.

“It was really fun to get to write a mystery. It was a brand new challenge for us and I’m hoping we’re able reach a new audience,” said Jeffrey Cranor, who along with writing partner Joseph Fink launched their latest podcast, “Unlicensed,” earlier this month with a pair of Hollywood actors voicing the lead roles.

“We’re just really excited for people to get to listen to this story that I think turned out better than I ever expected,” Fink added.

Fink and Cranor launched the “Welcome to Night Vale” podcast a decade ago. It was based in a surreal desert town and focused on conspiracies and strange, supernatural happenings. The series reached more than 300 million downloads and was published as a series of novels in 2015.

“Unlicensed” is the duo’s first new podcast since and it takes listeners in a very different direction from their previous work.

“It definitely falls under a thriller, L.A. noir. It’s dramatic and has elements of humor and quirkiness and strangeness, but it is set in a realistic world unlike our first podcast,” Cranor explained.

The 12-episode series, which can be found on audible.com and the Audible app, follows Molly Hatch, a character voiced by Molly Quinn, who previously starred on ABC’s “Castle.”

Hatch is recently divorced, two years sober and not sure what direction her life will take next. On a whim, she decides to answer an ad to be an assistant to a private investigator based in Azusa. The private investigator is Lou Rosen, voiced by Lusia Strus, who has appeared in films like “50 First Dates” and TV shows like TNT’s “Claws.”

Rosen is a brilliant detective, but she is completely disorganized both physically and mentally, often losing valuable evidence or forgetting things she’s already figured out. This has led to her not being able to get it together enough to obtain her private investigator license. But, she doesn’t let that stop her as she continues to work, illegally taking on whatever cases she can get. She takes on one involving a teenage girl, which takes the pair of investigators down a trail that leads to ransom, murder, a mysterious wellness center and maybe even traces back to a high-profile politician.

The podcast is narrated by T.L. Thompson, a series regular on the CW’s “4400.” Thompson acts as more of a guide on the podcast, not just pushing the story forward, but also adding more depth to the series.

“We try to give the narration something broader than just telling the people what happened,” Cranor said. “The narrator provides this bigger scope of just beyond the characters themselves to look at the history of Los Angeles, the history of the area, something that gives a greater context.”

The case takes the investigators through L.A. neighborhoods like Azusa, Northridge, the City of Industry and even to small communities like Kagel Canyon, which is an unincorporated area north of Lake View Terrace.

The duo said the inspiration for this story came from wanting to work with the podcasts’ voice actors, as well the desire to write about these specific neighborhoods.