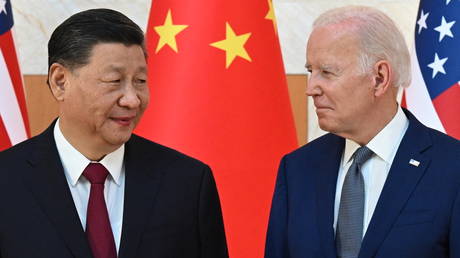 US President Joe Biden met with Xi Jinping on the sidelines of the G20 summit in Bali on Monday.

It’s the first time the two leaders have met in person, with Xi having isolated himself significantly from international diplomacy for several years due to the Covid-19 pandemic.

The meeting struck an unusual tone against the flow of US-China relations. The past few months have seen tensions soar to unprecedented highs over the island of Taiwan. Now, Biden tells the world that he does not want a cold war and doesn’t think China will invade Taiwan.

Crisis averted? Don’t count on it.

Actions speak louder than words, and in the context of two great powers contending for global influence, and a US hell-bent on sustaining its hegemonic position, diplomatic small talk means little.

Neither a change in policy nor new agreements have come out of that meeting. The scenario remains the same: The United States sees the rise of China as the largest ever threat to its unparalleled geopolitical dominance, in the domains of military, technology, and diplomacy.

Under Biden, the US has consolidated its attempts to try and contain the rise of China, which started under Donald Trump. In this, the Biden presidency is arguably even more aggressive than its predecessor.

Not three months ago, Nancy Pelosi, the Democratic Speaker of the US House of Representatives and Biden’s chief ally, visited the island of Taiwan in an unprecedented provocation to Beijing. On at least three occasions did Joe Biden profess that the US would “defend” Taiwan in the event of an invasion, virtually signaling he was prepared to go to war against Beijing.

So what happened to that rhetoric? Is Biden’s meeting with Xi a sign that aggression is abating? The answer is the US midterms happened. United States politicians antagonize China for their own political gain and act tough before elections. The Trump administration did the same.

Biden is a lucky man. Despite eye-watering levels of inflation and a record-low approval rating, the Democrats performed better than expected because, simply put, the alternative is worse. This means, for now, Biden isn’t under pressure to be tough on China and can let things cool down at least temporarily.

But that doesn’t mean anything else is going to change. The US will continue to try to contain China and will continue to see the island of Taiwan as a keystone of its strategy. Washington will continue to “push against the lines” of the ‘One China’ policy by deepening its ties with the self-governed island in securing its de-facto independence, and Beijing will continue to view the US’ intentions with deep distrust.

Likewise, the US will continue to advance its military presence throughout the region by increasing its asset deployments and seeking to militarily encircle China’s periphery. It will continue to push comprehensive anti-China alliances such as the Quad and the AUKUS.

It will also continue in trying to suppress China’s rise in capabilities through maintaining its trade war tariffs and technology embargoes, likely expanding the latter. This process, known as “decoupling,” will continue; the only questions are “how fast” and “in what areas.”

So really, these more careful words from Biden change nothing.

As soon as it suits the US in terms of its domestic political interests, it will immediately begin ramping up tensions again. It will then, as it always does, accuse China of being the instigator of instability.

China will likewise stick to the goal of demanding eventual reunification. The US will then call China a threat to other countries and frame itself as a guardian and protector, in order to further its own containment agenda.

So has war over Taiwan been averted? The answer is no, not at all. A routine diplomatic meeting means nothing when the two countries’ agendas clash so much. Finding compromise is difficult.

The US always views its hegemony as a zero-sum game. There is no compromise to be had, because its policy is always orientated to utilizing maximum advantage.

One meeting cannot compensate for the total deficit of trust, and this tells us nothing about where US-China relations may ultimately be headed. What Biden tends to say and do are often two different things.

At most, this is short-term reassurance.

Today24.pro
‘How many Uber drivers does it take to pick up a disabled person?’: Disabled person says 3 Uber drivers canceled on them because of their service dog Goldman issues stock market warning I'm convinced Facebook Marketplace is Meta's best feature after I furnished my new apartment with used furniture Crypto Lender Matrixport Raises Valuation to $1.5B Despite FTX Collapse