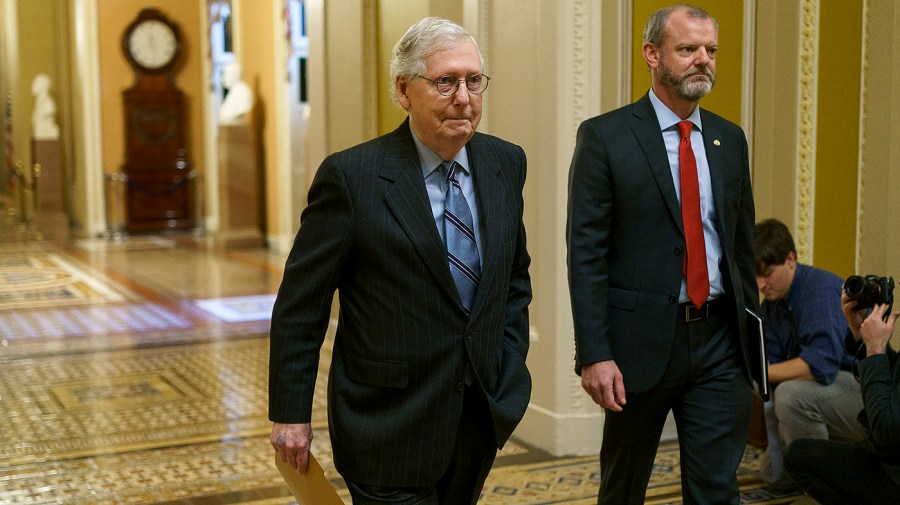 Conservative groups pressed Senate Republican Leader Mitch McConnell’s (R-Ky.) staff at a meeting Tuesday morning to delay the Senate GOP leadership elections that are scheduled for later this week, signaling they are not letting up pressure after last week’s election results disappointed many in the party.

“Sen. McConnell is pretty much under attack,” said a source who summarized Tuesday's meeting between senior Senate GOP staff, McConnell’s liaison to outside groups, and several conservative group leaders. The meeting was held outside the Capitol.

“It was explicitly made known by both groups and leaders that McConnell should delay the leadership election,” the source said, adding that McConnell’s staff was “put over the fire of this."

“There was obvious frustration, there was a lot of criticism in the room regarding Leader McConnell’s position” on passing an omnibus spending package at the end of the year, which the GOP leader appears to support, and the GOP’s leadership’s “belittling” of Republican senators who have called for a delay in the leadership election.

Lee, Scott and Cruz penned an op-ed for Fox News in September calling for Republican leaders to insist on passing a stop-gap funding measure that would last until next year, which would give House Republicans, who will likely be in the majority, a chance to negotiate a year-long omnibus package.

McConnell told reporters Monday that “of course” he has enough votes to be re-elected to another term as Senate GOP leader.

His most likely challenger is Scott, the chairman of the National Republican Senatorial Committee.

Scott, however, did not say anything about mounting a challenge at Monday’s meeting of the Senate GOP leadership team.

Even Republicans who support delaying the leadership election acknowledge McConnell has the votes to be re-elected.

Participants in Tuesday’s tense meeting included activist leaders who signed an open letter to Senate and House Republican leaders calling for the post-election leadership elections to be delayed “until after the December [Senate] runoff in Georgia and all election results are fully decided.”

Conservatives at Tuesday’s meeting pointed out that Senate Democrats aren’t holding their own leadership elections until after the Georgia runoff the week of Dec. 6.

They also pointed out the Senate GOP Conference Rules explicitly dictate that leadership elections should be held after a new Congress convenes, although the rule hasn’t been enforced in recent years.

Where to find Fulham vs. Sunderland on US TV

'Quordle' today: Here are the answers and hints for January 28

Today24.pro
EASY chili recipe for dinner #food New Honda Civic Type R review: Is it really better? How to deal with rejection How to Fall Asleep in 60 Seconds (OR LESS)