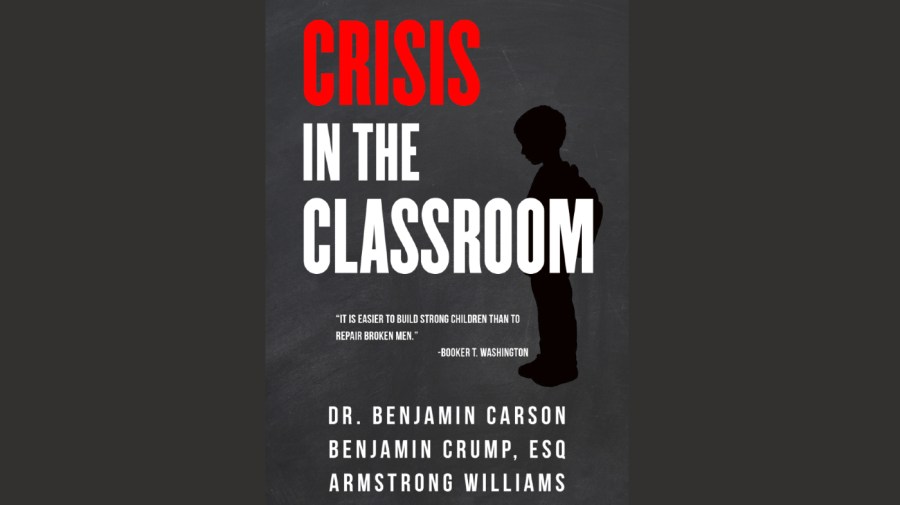 A trio of high-profile figures from across the political spectrum are coming together to address what they’re calling a “crisis in the classroom.”

“We really need to be talking about this and not just sweeping it under the rug,” Carson, a 2016 Republican presidential candidate and former neurosurgeon, told ITK in a joint interview with Williams.

The “Armstrong Williams Show” host, who is also an opinion contributor for The Hill, said he, Carson and Crump — who are all friends — committed to “put aside our political allegiances and do something for these parents and for these kids, for a change.”

In the collection of essays, Williams writes that education is “in a free fall in the United States despite climbing per pupil expenditures.”

“Each year, the collective IQ or knowledge of leaders and the citizenry plunges to new depths of ignorance,” writes Williams. “Even members of Congress are clueless about the three branches of government and the allocation of constitutional responsibilities. Students know virtually nothing about history — even of Watergate or the Vietnam War.”

Carson argues that the “havoc and chaos currently plaguing our society have many of their roots in the dismal educational environment that has been allowed to fester in many communities throughout our nation.”

Carson, 71, tied some of the educational struggles facing America’s students to a lack of health care, recalling his own experience as a kid failing his classes as he struggled to see in school.

“I just assumed that everybody saw in this world the same way that I did. I didn't know that anybody could actually see the board,” Carson said. “And once I got glasses, it completely changed my orientation.”

“That was the beginning of a metamorphosis for me. It made a huge difference,” Carson grinned.

It would likely take another metamorphosis — or some divine intervention — to transform Carson back into a White House hopeful, he said.

Asked if he would ever launch another presidential bid, Carson told ITK, “That would not be my desire.”

“I will always do what God wants me to do, but I hope that’s not it,” Carson quipped.

The Presidential Medal of Freedom winner, who served in HUD under former President Trump, didn’t explicitly offer his endorsement of his ex-boss, who has teased a “major announcement” on Tuesday — widely expected to be a 2024 run.

“I will put it this way: Whoever the nominee is who is opposing the advancement of a country that is of, for and by the government, I will support.”

“We need a different direction that gets us back to the concept of a country that is of, by and for the people,” Carson added.

Would that even mean crossing party lines to back a Democrat?

“I would support anybody from any political background, as long as they are supporting the principles of the founding of our nation and advancing it in the right direction.”

“I will support anybody. I'm much more about the values and the principles than I am about party,” Carson said.

For now, the retired doctor, along with Williams and Crump, are focusing on America’s academic future.

“I think it's important that we recognize that while the government should allocate money for these schools, I think the best scenario that we have, where it really works is when they allocate the money to charter schools and private schools,” Williams said, “and they allow them to select their own educators, their own teachers, they hold these kids accountable.”

Carson said he hopes readers come away from the book “recognizing that it doesn't matter what background you come from. In this country, if you get a good education, you write your own ticket — and that we are failing a large portion of our population when we don't recognize that and do what is necessary to ensure that.”