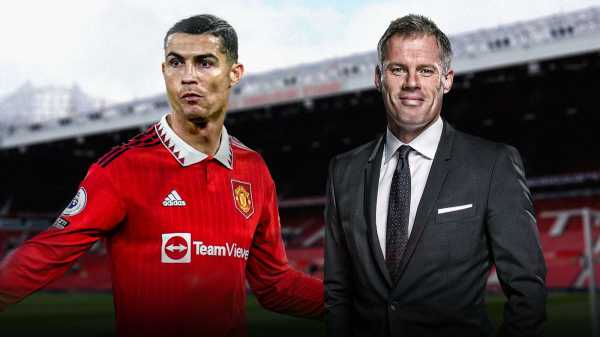 Following Cristiano Ronaldo’s interview where he criticises Manchester United and Erik ten Hag, Sky Sports pundit Jamie Carragher discusses why the club should sack the 37-year-old and that there is no way back.

I just thought the comments [revealed on Sunday] were bizarre. They were bang out of order considering the timing of it: just hours after Manchester United fans being delighted after getting a winning goal at Fulham with the last kick of the game.

In a 90-minute interview with Piers Morgan Uncensored on TalkTV, Cristiano Ronaldo claimed head coach Erik ten Hag and others want him out of Old Trafford

It should give them excitement over the next month for when the league starts again. They should be enjoying themselves and then the Ronaldo interview comes out and boom – it’s about negativity. Not the team, not the manager – it’s about Cristiano Ronaldo. And it’s been like that since he’s come back. It’s basically been the Cristiano Ronaldo show.

At times that’s been good on the pitch, last season he got a lot of goals. But this season he’s not involved and he’s craving the attention that he can’t get because he’s not on the pitch. The only way he’s going to do that is by causing trouble and that was exactly his intention with the interview.

Senior figures at the club are holding talks about how to deal with the player but, as far as Erik ten Hag is concerned, he has never disrespected any player – including Ronaldo.

Ronaldo has started four games since he was dropped for the match at Chelsea and he was captain against Aston Villa in the Premier League this month.

It’s Man Utd’s problem, not Ten Hag’s problem now. It has got so big that it has to be dealt with by the owners and senior figures at the club. It’s not something Ten Hag can deal with on his own.

It appears there is no way back for Ronaldo at United and it’s unlikely he’ll play for the club again. Everyone at the club has done whatever they can to help Ronaldo but there is only so much they can do.

When he was told he was not starting against Villa last Thursday, he went to see United’s medical department to tell them he was not well. United have not seen him since.

He wants to be sacked, that’s obvious. He told the club in the summer that he wanted to leave, which is football – these things happen. There were no takers, maybe because of his wages or the price Manchester United wanted. I think he knows that’s going to be the same in this next transfer window and maybe the following summer and he is now trying to be sacked or wants to leave on a free. That’s the only way he’s going to get out.

And I think United should sack him or move him on by giving him a free transfer. At the moment, they’re trying to build something that is not trying to win the Premier League or the Champions League right now. The manager will want to push for those honours in the next two or three years and Ronaldo is not going to be around.

He is going to be a distraction, this will not go away. As soon as a player comes out and says he doesn’t respect the manager, how is that going to work when he walks into the first day of the post-World Cup season? It can’t work that going forward – there will be people taking pictures, we will be asking about Ronaldo to the manager in interviews for Sky. United don’t need the hassle.

There’s been no disrespect to Ronaldo

Image: Cristiano Ronaldo looks dejected following Manchester United's defeat to Aston Villa – a game in which he captained the club

I’m not sure where this disrespect from Erik ten Hag comes from, I don’t get it at all. If anything, he’s disrespecting United and Ten Hag.

Ronaldo gets respect from everyone – no one can not respect Ronaldo for what he’s done. He’s the greatest player of all time and Erik ten Hag had that respect. But there was no respect going the other way.

He wanted to leave, he has refused to come on as a sub, then he left the stadium before the Tottenham game finished and even did that in a pre-season game as well. Ten Hag even made him captain at Aston Villa a couple of weeks ago. I don’t get this lack of respect on either way but the Ronaldo is there for everyone to see.

He couldn’t accept being a sub, which in some ways I admire because he’s got that drive and that’s what made him the great player he is. This was always going to blow up in United’s face and it was a mistake to bring him back in the first place.

Ten Hag has played a blinder with Ronaldo

The manager has played an absolute blinder on how to deal with Ronaldo from day one. He’s not got him involved in too much, he’s disciplined him when he’s refused to come on which sends a message to the rest of the dressing room.

And in some ways, while he’s a nightmare for United right now because it’s taken up all the focus when it should be on the team, Erik ten Hag can just sit back and let this play out and think: “I’ve done my job.”

Ronaldo’s reputation will never be lost or ruined. It will be tainted slightly. You will never forget what Ronaldo was for Manchester United, certainly in that golden period in one of the best Premier League teams we’ve ever seen that won numerous league titles and the Champions League.

He’s a legendary figure at Manchester United and when the dust settles, people will go back to that. There are legendary players who have left in the past and left clubs at different times for different reasons and it hasn’t been the exit that they wanted.

But in time, people look back at the big picture. If you assess Ronaldo as an icon from the day he came to the day he leaves, there’s a lot more good than bad. Right now, people are emotional. Some United fans and maybe some people on social media want him to go. But he’s done so much for that football club that he will still have a great legacy.

Elon wants to go to war with Apple. History suggests it's probably not going to make a difference.