A FITNESS influencer has revealed that her massive boobs make her technically OBESE, despite her active lifestyle.

Russian influencer Pasha Pozdniakova weighs more than 13 stone despite being just 5ft5in tall but says the weight is mostly down to her “distracting” body parts.

The blonde gym bunny, 23, who boasts more than a million followers on Instagram is officially classified as obese under BMI rankings.

However, she called out the measurement system for failing to take account of body distribution and muscle mass.

In a viral TikTok video, Pasha stepped on the scales to reveal she weighs 85.7kg (13.4 stone).

The video has since racked up more than 200,000 likes on the video-sharing platform. 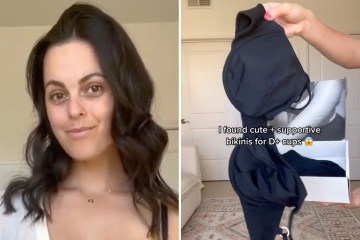 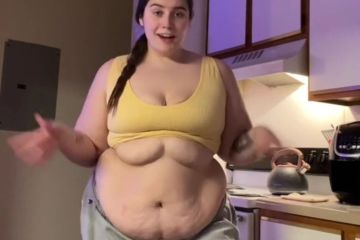 Posing for the camera in a matching pink gym wear set that showcased her assets, she wrote: “This is what 85kg looks like on my body.”

In the caption, she said: “Beauty doesn’t have a weight limit.”

She added in the comments: “Hope this video will help someone feel better.”

Pasha was soon flooded with positive comments, many from women describing their similar experiences.

“Yesss it looks so different on everyone!” user Anna wrote. “I weight 95kg and I know people that look like me that weighs everything from 80-120.”

While a third wrote: “Wow, I’m speechless! How is that possible?”

And Pasha had the perfect response to a troll who tried to call her out for having plastic surgery to achieve her figure.

To a troll that asked her: “How much did they cost?” she replied: “God gave me them for free.”

God gave me them for free

It comes after a Brit mum revealed she was told she was obese by her doctor, even though she is a size 10.

She explained that she’d gone to see her doctor for the results of a blood test when he made the comment on her weight.

“So I went to the doctors a couple of months ago, about June/July time and I was weighing about 11st 12lbs.

While a mum-of-two hit out at trolls who branded her an “obesity time bomb”.

Charlotte Rachel, 30, says trolls are just jealous of her success and sexy stretchmarks.

Online marketer and plus size advocate, Charlotte, from Norwich, Norfolk, loves creating catwalk-worthy looks in her own living room each day and shares them with her online following of almost half a million.

And a body-positive influencer has hit back at being branded “obese” by “men on the internet”.

Emily Bispo, who is from California, United States, also known on social media as ‘imnotbunny’, has 1.3million followers on TikTok and often shares uplifting self-love content.