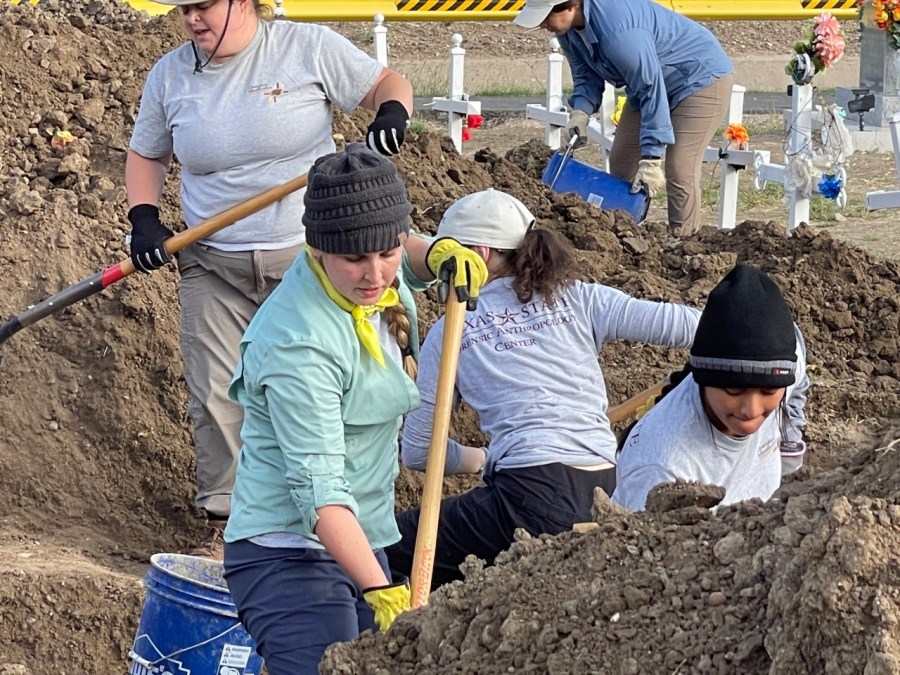 EAGLE PASS, Texas (Border Report) -- The sun beat hard on the group of anthropology students from Texas State University as they dug feet below the soft earth on Saturday at the Maverick County Cemetery.

Using hand-held trowels and shovels, it took them six hours to unearth the remains of two unidentified migrants who were buried in early September -- likely victims of flooding when the Rio Grande swelled as heavy rains bore down on the border region.

With the utmost care, the all-female team used ropes and makeshift pulleys to hoist the swollen and heavy remains from deep within the grave. It took four of them to carry the bodies to a nearby tent where an initial examination would take place.

"Here there could be 20 to 30 or more," said Dr. Kate Spradley, an anthropology professor at Texas State University and the director of the university's Operation Identification program, as she peered over the giant earthen pit that represented hours of sweat and work by her students.

It was the group's third day of exhumations just miles from the Texas-Mexico border in this rural border county, which was overwhelmed by the fall rains and rising migrant deaths as asylum-seekers tried to traverse the dangerous Rio Grande -- many not making it.

After three days, they had unearthed seven migrant remains. But they believe there could be over 100 unidentified individuals in the Maverick County Cemetery dating back to 1985, Spradley said.

"This is a preliminary exhumation. We’re figuring out what's going on here and how things work and we’d like to come back for a bigger exhumation in the near future," she told Border report.

This county of just 58,000 borders Piedras Negras, Mexico, which currently is one of the most popular areas for migrant crossings along the entire Southwest border. It's part of the U.S. Border Patrol's Del Rio Sector, which in Fiscal Year 2022 surpassed the Rio Grande Valley of South Texas to be the No. 1 location for migrant encounters on the U.S. border with Mexico, according to U.S. Customs and Border Protection data.

With that draw also came a massive uptick in deaths of migrants, local authorities report.

At one point, the Maverick County Sheriff's Department was stacking unidentified migrant bodies in a trailer north of Eagle Pass until they could find a way to get them analyzed. Many bodies were buried in the Maverick County Cemetery, in town, which is where Spradley's team has been digging.

She said that based on their records, and county records, there could be upwards of 130 individuals buried in the cemetery that need identification analysis to try to find their families.

"Maverick County went from experiencing one to two deaths per year and then all of a sudden they had 30 deaths per year. That's really an overwhelming mass disaster and usually it is very difficult to deal with that situation," Spradley said. "These large number of deaths in these border counties are not recognized as a mass disaster. If they were there were there would be resources deployed here to assist the county."

It costs the county $1,500 to $2,000 to bury an indigent or unidentified migrant. There were so many asylum-seekers who died that they were put in an area in the back corner of the cemetery and marked the gravesites with PVC pipes.

Spradley said that her organization had been funded through state border security funds, but Gov. Greg Abbott moved monies to support his Operation Lone Star border security initiative and she said her funding went dry as of the start of Fiscal Year 2023, which began on Oct. 1.

The three-day dig cost about $13,000, Spradley said, and when her nonprofit ran out of funding, the nonprofit South Texas Human Rights Center was on hand and told Border Report they would be donating monies to offset the dig costs.

Operation Identification began in 2013 and has since been the lead for eight exhumation projects along the border, most in the Rio Grande Valley, she said. This was their first time working in Maverick County.

A justice of the peace signed off on the exhumations because, under federal law, DNA should be sent from unidentified remains to the FBI's Combined DNA Index system, called CODIS.

Clothing from those recovered, as well as any tattoos, or markings, or other identifying factors, would be used in the analysis, she said.

“We will submit it to CODIS. We will submit to other DNA labs and we will be working collaboratively to establish identifications," Spradley said.

Shelby Garza, a doctoral student in the university's applied anthropology department, was the team leader for Saturday's dig and said helping families find their lost loved ones is important to her.

"For me, that is the point of what got me into this field in the first place. Every single individual has a family, has somebody somewhere. They need to be repatriated," Garza said. "It's very rewarding work with such a current humanitarian crisis."

The work was slow and hard.

The students chipped away at the moist earth, piling the dirt to the side.

Markers bearing numbers in between "John M Doe" are not always accurate or match the bodies they are with, Spradley said.

The entire area smelled of death and decay and the wearing of masks did not help to block the smell or harsh environment in which they were working.

Any items found were cataloged and put into buckets.

Diggers took photographs and jotted down GPS coordinates to mark the exact spot where bodies were unearthed.

Mariah Moe is a Ph.D. candidate in applied anthropology whose dissertation involves mapping the Maverick County Cemetery to try to locate unidentified migrant remains. Using drone imagery, radar and other technology, she says she has spotted several sections in the cemetery she believes could house migrant remains.

Don White, a volunteer deputy with the Brooks County Sheriff's Department, drove almost 200 miles to assist the team. With his firearm on his side, he told Border Report sometimes people will cause trouble thinking the team is needlessly bothering graves.

He scours the remote and desolate brush in Brooks County looking for lost migrants, he often comes upon their decomposed remains. He works closely with the South Texas Human Rights Center and Spradley's Operation Identification to try to locate their families.

So far this year, there have been 82 migrants who died in Brooks County alone. But Maverick County numbers are rising and now it is an area on which forensic anthropologists are focusing.

"You hate to lose a loved one and if you can’t get the loved ones back no matter what then that’s a deep ache you have the rest of your life and if I do my job then the family will have some closure and get their loved one back," White said.

He said he is amazed at the effort these women put into recovering remains, adding that he was honored to be helping them Saturday.

"We get calls all the way from Arizona that people have disappeared, Arizona, all the way down to the Texas border," he said.

They try to pinpoint where the migrants (or their remains) might be based on where they crossed the border -- or where they told their families they were planning on crossing.

"The humanitarian effort is that there is dignity in death and people are making that effort to recover and repatriate their loved ones. It’s very important for people to get closure," Canales said.

Spradley says she is anxious to return with her team to Eagle Pass once they confirm the areas they believe they should start digging.

The bodies recovered on Saturday were driven in a truck back to her lab at Texas State University, about 200 miles away in San Marcos, Texas, where they will be fully analyzed.

These remains are new and relatively fresh, still containing soft tissue, like fingerprints, and she hopes that will aid in the identification process. However, she cautions it could take years to make a positive match. And some of that will depend upon families in other countries in the world going through the process to report their loved ones missing and pursuing to find their remains and repatriating them back to their home countries.

"We think working collaboratively with the county, working with the Missing Migrants Unit of the Border Patrol, Justices of the Peace and the sheriff, we can figure out the identity of the individuals here and hopefully send them back to their families," she said.