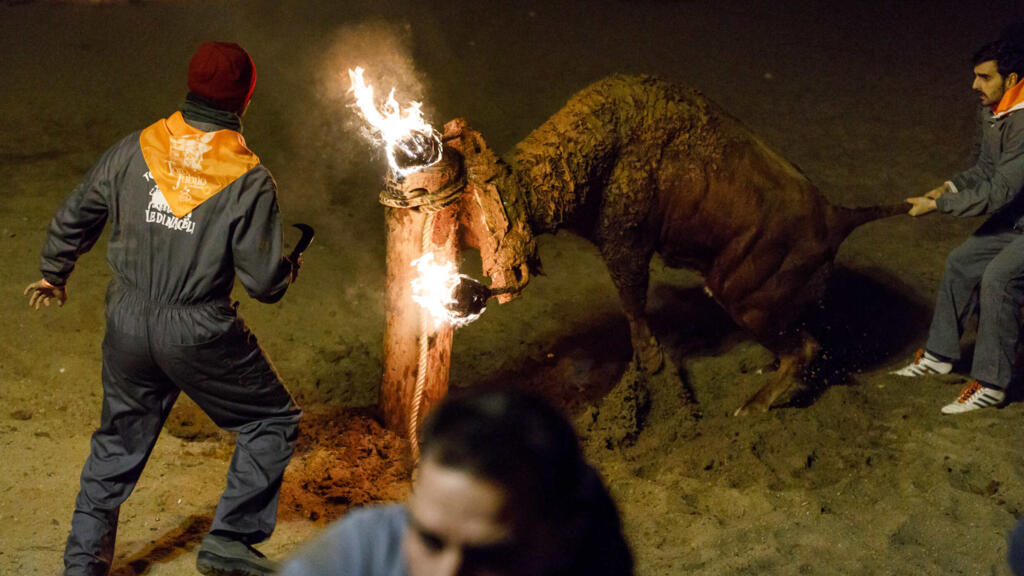 Animal rights campaigners have called for a ban on the centuries-old festival in the medieval town of Medinaceli, calling it animal abuse. The "Toro Jubilo" -- or "Joy of the Bull" -- fiesta typically takes place on the second weekend in November. Spanish anti-animal cruelty party PACMA has said it is mulling legal action against organisers of the event. "This grotesque tradition continues to be celebrated even though we are no longer in the Stone Age," it tweeted. Just before midnight on Saturday, a group of mostly men dressed in matching grey uniforms dragged the bull into a makeshift bullring set up in the main square of the town. They then tied the bull to a wooden post and attached balls of highly flammable tar to its horns as hundreds of people watched behind barriers. One man pulled on its tail to keep it steady. They caked mud to the animal's back and face in an effort to protect it from the flames, before setting the tar balls alight. Participants then released the bull into the square, covered in sand for the occasion, to cheers and applause from the crowd. The bull frantically shook its head to try to rid itself of the burning balls of tar as it raced around the square. Several men jumped into the ring and attempted to dodge the bull in a purported test of courage. Some dangled a cape in front of it. This continued for about 20 minutes until the flammable balls on its horns went out and the bull collapsed. It was then dragged out of the ring. 'Simply animal abuse' The bull's life is traditionally spared at the end of the event. But this year the animal died after another young castrated bull -- which organisers sent into the bullring to guide him out of the arena -- rammed him in the head, the festival said. Jaime Posada, of the Spanish branch of animal rights group Anima Naturalis, which is also calling for a ban, said the bull is kept in a tight pen for hours before it is dragged into the square. "It can't move, it can hardly sit down, so it is stressed simply from that," he told AFP. Participants declined to be interviewed, and PACMA and other opponents of the fiesta said locals prevented them from filming the ritual. "Why are they afraid? Basically because they know that this is not culture, it's simply animal abuse and they enjoy doing it," Posada said. The festival, however, is one of the main events for Medinaceli, which is home to around 650 people. The regional government of Castilla and Leon has even given the festival a special cultural status. The Medinaceli town hall did not respond to a request to comment.

No let-up in fight against terror, army chief vows

Today24.pro
Why the power grid is an 'attractive target' for domestic terrorists: report The Darkest Secret and Tragedy of Edwin Valero Hans Niemann in the sole lead at the 3rd El Llobregat Open In the age of megachurches, communion has become a big business