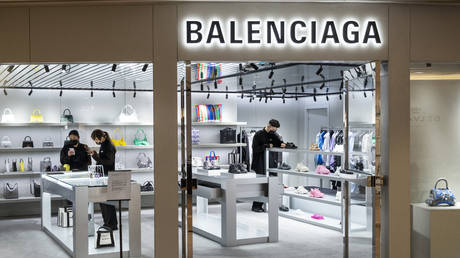 Luxury fashion house Balenciaga has become the first major clothing brand to delete its Twitter account since the platform was acquired by billionaire Elon Musk late last month. The Paris-based company has not offered any comment on the move, but confirmed the removal of the account to the Business of Fashion news website on Monday.

Celebrities including model Gigi Hadid and TV star Shonda Rhimes have also deleted their accounts since Musk announced a series of changes to the platform, including a monthly verification subscription, a significant staff reduction, a push for “free speech,” and reported plans to bring back a number of banned accounts, such as that of former US President Donald Trump.

In an additional blow to Twitter, corporations such as General Motors and Dyson have stopped investing in advertising on the platform over fears of weaker content moderation, potentially making it more difficult for advertisers to avoid being linked with hate speech and misinformation.

One of the changes that has raised the most concern among users is the introduction of a monthly subscription in order to receive a blue checkmark – a sign of authentication on the site. With anyone able to pay $8 a month to receive the mark, a number of fake accounts impersonating major brands, officials and celebrities have started popping up, including impersonations of Musk himself.

The billionaire has even been threatened by a US senator, after a Washington Post reporter was able to create a verified Twitter account posing as the official. “Twitter must explain how this happened and how to prevent it from happening again,” wrote Massachusetts Democrat Edward Markey, accusing Musk of “putting profits over people and his debt over stopping disinformation.”

After Musk suggested that the reason someone was able to create a fake account of the senator was because his “real account sounds like a parody,” Markey issued a stern warning to the tycoon, saying: “Fix your companies, or Congress will.”

Musk acquired Twitter in a $44 billion takeover that was completed late last month. Since then he has fired most of the executive chain as well as several thousand employees – nearly 50% of the company’s workforce – as well as a number of contractors in Twitter's content moderation, real estate and marketing departments.

The billionaire has explained his actions by stating that the company had become too bloated with staff over the years and that in order for it to succeed it must be able to generate profit. He has also expressed hope that Twitter could become a “common digital town square,” and stressed the importance of combating excessive partisan censorship on the platform.

Today24.pro
I make $1,000 a month by promoting Amazon products on social media. It only takes 5 hours per week — here's how I set up my side hustle. Billionaire investor Howard Marks touts a bargain boom as interest-rate fears grip markets - and predicts a surge in companies going bankrupt ‘How many Uber drivers does it take to pick up a disabled person?’: Disabled person says 3 Uber drivers canceled on them because of their service dog One of The Greatest Britons in History - Joe Calzaghe