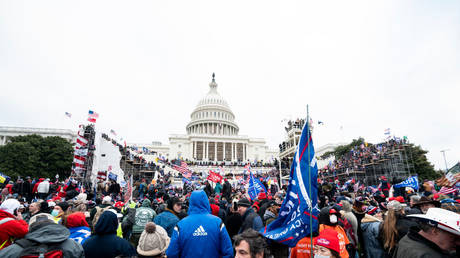 The government has been accused of withholding information about its sources inside the Proud Boys group, the newspaper reported

The US Federal Bureau of Investigation (FBI) may have had up to eight informants in the right-wing ‘Proud Boys’ fraternity ahead of the Capitol Hill riot on January 6, 2021, the New York Times reported on Monday. Five members of the group are facing trial next month over their alleged involvement in the attack.

According to “heavily redacted” court filings cited by the outlet, the defense for those five members argued that some of the information the FBI’s sources had provided “was favorable to their efforts to defend their clients against sedition charges” and was “improperly withheld by prosecutors” until recently.

The NYT’s revelation came amid claims by some Republicans and conservative commentators that the Capitol riot was part of a false-flag plot by the FBI against then-President Donald Trump and his supporters.

Since the court filings are under a “highly restrictive protective order,” the NYT said it was not possible to know what details the informants shared with the FBI or how it could help the defendants.

The Proud Boys’ former leader Enrique Tarrio is facing sedition charges, along with Joseph Biggs, Ethan Nordean, Zachary Rehl, and Dominic Pezzola. The trial is set to begin on December 12.

According to the paper, prosecutors have been denying allegations that the government tried to hide the information. They also claim that the information in question was not directly relevant to the Proud Boys case.

The Times has previously reported that the FBI had informants both in the Proud Boys and the Oath Keepers militia, another far-right group allegedly involved in the Capitol attack.

The paper said, however, that “no evidence has surfaced” suggesting that the FBI played any role in the Capitol riot.

'Wednesday' creators say Netflix wanted to cut some of Jenna Ortega's darker lines but they pushed back: 'That's the whole point of the character'

Today24.pro
Billionaire investor Howard Marks touts a bargain boom as interest-rate fears grip markets - and predicts a surge in companies going bankrupt I make $1,000 a month by promoting Amazon products on social media. It only takes 5 hours per week — here's how I set up my side hustle. One of The Greatest Britons in History - Joe Calzaghe RoboCV: stacker robot