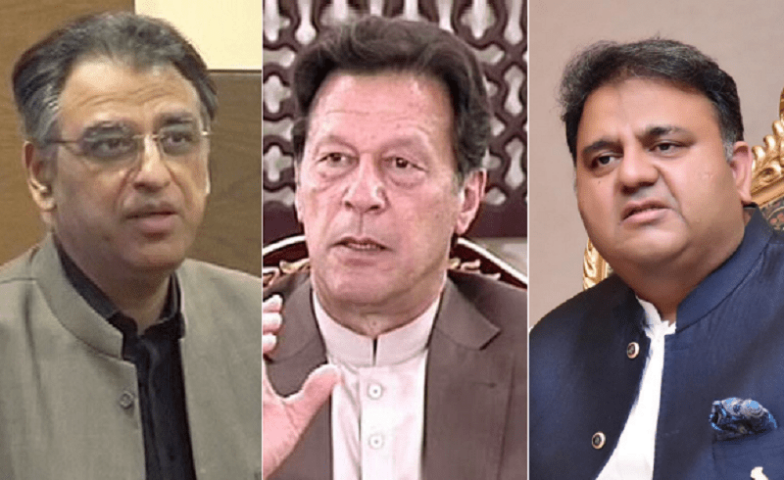 The Supreme Court on Tuesday issued notices to former prime minister Imran Khan, and PTI leaders Asad Umar and Fawad Chaudhry in cases pertaining to the contempt of Election Commission of Pakistan (ECP).

Earlier, a petition was moved through Advocate Sajeel Sheryar Swati on behalf of the ECP with a request to order consolidation of all six petitions before one high court instead of defending the commission’s stance over the issuance of contempt notices against PTI leaders in different high courts.

However, the recipients had challenged the same before different high courts, including the Lahore High Court, its Rawalpindi bench, the Sindh High Court and the Islamabad High Court, on the grounds that Section 10 of the Elections Act, the statutory provision about the commission’s power to punish over contempt, was against the Constitution.

The PTI leaders had also sought from the high courts a declaratory relief from the charges.

At the onset of the hearing, the top court, in response to the ECP’s request, remarked that the election commission had submitted applications in different high courts regarding all the cases being shifted to one high court. “Either prepare for local body polls or pursue the cases,” the court stated.

The chief justice went on to say that the election commission is relying on Article 186-A in the case. “Is there any precedent in history where the SC consolidated cases of different high courts?” he asked.

According to the National Assembly website, Article 186-A of the Constitution titled “Power of Supreme Court to transfer cases” states that the “top court may, if it considers it expedient to do so in the interest of justice, transfer any case, appeal, or other proceedings pending before any high court to any other high court.”

Responding to the CJP, the election commission’s counsel said that the SC had ordered the consolidation of all income tax cases to one high court in 1999.

Upon hearing this, Justice Bandial said it is imperative that a valid legal point be present to consolidate all the high court cases. “Who are the petitioners in contempt of ECP cases in high courts?” he asked.

ECP lawyer Swati replied saying that PTI chairman and party members Fawad and Umar had filed cases against the election commission in different high courts of the country.

Further on, Justice Malik reminded the election commission counsel that the apex court, in the Pakistan Electronic Media Regulatory Authority cases, had already declared that the cases will continue in the high courts and won’t be consolidated.

Towards the end of the hearing, Justice Minallah said the top court had consolidated all the high court cases into one court in the Haj assistance case.

ECP counsel Swati contended that there will be contradictory verdicts if the election commission cases continue to be heard in different courts.

The hearing was adjourned for an indefinite period.