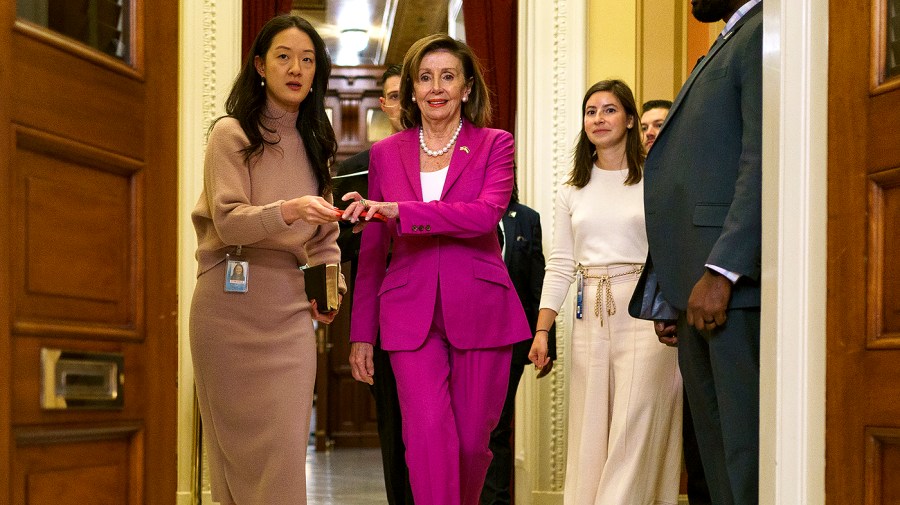 House Democrats returned to Washington on Monday feeling newly invigorated by their strong performance in the midterm elections, but also facing uncertain terrain on two big fronts: The lower chamber remains too close to call, and the future of Speaker Nancy Pelosi (D-Calif.) remains unknown.Pelosi had previously pledged to step out of the top leadership spot at the end of this term — an enormous shake-up that would transform the face of the party, after two decades under Pelosi’s reign, and spark a scramble of younger lawmakers racing to fill the void.

Many in the party are now saying the results have put Pelosi in the driver’s seat to keep the top spot — if she wants it.

As of Monday evening, Democrats had already retained the Senate and still had very slim hopes of depriving the GOP of a House majority. It’s the best showing by the president’s party in an initial midterm election since 2002.

A Pelosi bid to remain in power would quickly spark an outcry from some Democratic lawmakers, who are eager for new leadership and stand ready to hold Pelosi to her promised exit. They might have a tough time blocking her, however, particularly if Democrats find themselves in the minority and Pelosi needs only half of her caucus to stay in place.

“A very narrow majority has been ably handled by this Speaker, and continuity is an entirely rational impulse here,” said Rep. Mark Takano (D-Calif.). “I can understand if members of my caucus aren’t there, but the discipline and the unity that was achieved in the 117th Congress, I think, could be achieved in the 118th Congress.

“Speaker Pelosi’s a known quantity, and so I’m very much open to that.”

Pelosi, for her part, is famously opaque about her plans, and this year is no exception: She has repeatedly declined to play her hand.

The midterm elections arrived just 10 days after her husband, Paul Pelosi, was assaulted in their San Francisco home by a lone intruder who bludgeoned the 82-year-old with a hammer, according to the charges filed by both local and federal law enforcers. And the Speaker has made clear that the attack will influence her decision, even as she’s refused to disclose what it is until the final House results have come in.

“My decision will then be rooted in the wishes of my family and the wishes of my caucus,” Pelosi said Sunday in an interview with CNN’s “State of the Union” program.  “But none of it will be very much considered until we see what the outcome of all of this is.”

How long that takes is anyone’s guess.

Republicans are still widely expected to flip control of the lower chamber. As of Monday night, 19 close races were yet to be called, and Republicans had secured only 212 seats — six shy of the number they’ll need to seize the majority. Many of those outstanding races are in Western states, including California, where ballot-counting can sometimes take weeks.

The delayed outcome has put the Democrats’ leadership landscape in a state of limbo, forcing a number of up-and-coming lawmakers to wait, ever more anxiously, for Pelosi to announce her intentions before they declare theirs.

Pelosi’s top two deputies — Majority Leader Steny Hoyer (D-Md.) and Democratic Whip James Clyburn (S.C.) — have both made it clear that they were never a part of Pelosi’s term-limit promise. But they’ve also been careful not to get ahead of the Speaker.

The same outward patience is being demonstrated by the three members of the second tier of Democratic leadership — Reps. Hakeem Jeffries (N.Y.), Katherine Clark (Mass.) and Pete Aguilar (Calif.) — who are primed to run for higher spots at the first opportunity.

Jeffries is widely viewed as the favorite for the top position whenever Pelosi steps aside. But Hoyer, after almost 20 years right behind Pelosi, has his own loyal following. And Rep. Adam Schiff (D-Calif.), a close Pelosi ally and prolific fundraiser, is also reaching out to lawmakers as he considers a bid for that spot, according to several sources.

In the meantime, the attack on Pelosi’s husband appears to have only strengthened her hand within the caucus, as more and more lawmakers say they’re ready to support whatever course she chooses.

“It’s led everybody to say it’s her timetable. And when she sets it, and decides to move, then we’re going to respect that,” Rep. David Trone (D), who won a tight reelection contest in western Maryland last week, told CNN. “We’re going to defer to the Speaker, for all the great work she’s done.”

Amid the debate over Pelosi’s future, reports have emerged suggesting the famously Roman Catholic Speaker is eyeing an exit from Congress in order to pursue an ambassadorship in Italy — an idea soundly rejected by Pelosi’s office on Monday.

“The Speaker has no interest in becoming the U.S. Ambassador to Italy,” spokesman Drew Hammill tweeted. “She intends to continue serving in Congress regardless of her decision about House Democratic leadership.”

For all its tensions, the debate swirling around the Democrats’ leadership future is not nearly as heated as the fight across the aisle, where Minority Leader Kevin McCarthy (R-Calif.), who’s seeking to replace Pelosi if the House changes hands, is facing a revolt from conservatives demanding new House rules next year.

McCarthy’s resistance to those changes is expected to spark a challenge to his leadership bid this week, reportedly from Rep. Andy Biggs (R-Ariz.), former head of the far-right Freedom Caucus, when Republicans huddle for a closed-door vote on Tuesday.

McCarthy is expected to prevail easily in that contest, which requires support from only half of the GOP conference. But it could be a gauge of whether McCarthy has enough backing to become Speaker in January, when he would need a majority of the full House — 218 votes — to take the gavel.

“Tomorrow is primarily about demonstrating that nobody has 218 votes,” Rep. Bob Good (R-Va.), another Freedom Caucus member, said Monday. “And I suspect that there will be a number of people who will be interested in becoming Speaker once it’s clear after tomorrow that there’s not 218 votes.”

Another wild card in both leadership battles has been former President Trump, who is expected to announce the launch of his 2024 presidential campaign on Tuesday — the same day as the House GOP leadership elections.

The combination of factors has put most of the focus this week on the Republicans, giving Pelosi a cushion of time to weigh her own leadership decision. Her allies say that can only help her if she does choose to stay.

Today24.pro
Goldman issues stock market warning Crypto Lender Matrixport Raises Valuation to $1.5B Despite FTX Collapse ‘How many Uber drivers does it take to pick up a disabled person?’: Disabled person says 3 Uber drivers canceled on them because of their service dog Billionaire investor Howard Marks touts a bargain boom as interest-rate fears grip markets - and predicts a surge in companies going bankrupt