A PASSENGER has sparked debate after complaining about a group of girls talking in an “incredibly annoying” way during a flight.

The person was mid-way through a six-hour journey when the girls’ endless chatter got too much for them.

By the passenger’s own admission, they weren’t talking too loudly, but still they were talking enough for the person to be irritated.

However, they weren’t sure whether or not it was acceptable to ask the group to quiet down.

So they reached out to social media site Reddit to ask other people what they should do in the situation.

They wrote: “I am currently sitting on a plane for a six-hour flight. We’re three hours in. 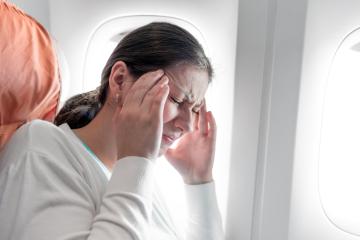 “There’s a group of girls that have been non stop talking since the plane took off.

“They are talking in an appropriate volume (not too loud but also not particularly quiet) but it is still incredibly annoying as I’ve had to listen to them talk for 3 hours now (with no ending in sight) and I’m trying to study.

“They aren’t abnormally loud – it’s just annoying me. Am I allowed to ask them to talk quieter?”

The passenger’s question drew a mixed bag of responses, but on the whole, people suggested he was in the wrong.

One person said: “Sorry. If they are using appropriate volume, it’s on you to deal with the noise. Put on headphones and call it a day.”

Another wrote: “You said yourself it’s a reasonable volume. You’re in an airplane, you can’t expect everyone to bend to your needs.

“Ask the flight attendant for ear plugs if it’s bothering you.”

A third added: “Put in your headphones or earbuds and suck it up. You are in a cramped metal tube hurtling through the sky, not a library.”

However, one person said the passenger was within their rights to ask them to stop making noise.

They said: “You can ask, as long as you make it clear you are asking them for a favour and they are free to decline.”

Meanwhile, this is where you should sit on a plane to avoid crying babies.

And this woman divided opinion after she complained about noisy kids after her flight.

Deep South tornado outbreak: 2 dead from twister in the dark

Ben Simmons out at least 3 games with left calf strain

Today24.pro
One of The Greatest Britons in History - Joe Calzaghe RoboCV: stacker robot LAMB BUTTER Will Melt in Your Mouth! Ancient Food on the Silk Road! I make $1,000 a month by promoting Amazon products on social media. It only takes 5 hours per week — here's how I set up my side hustle.