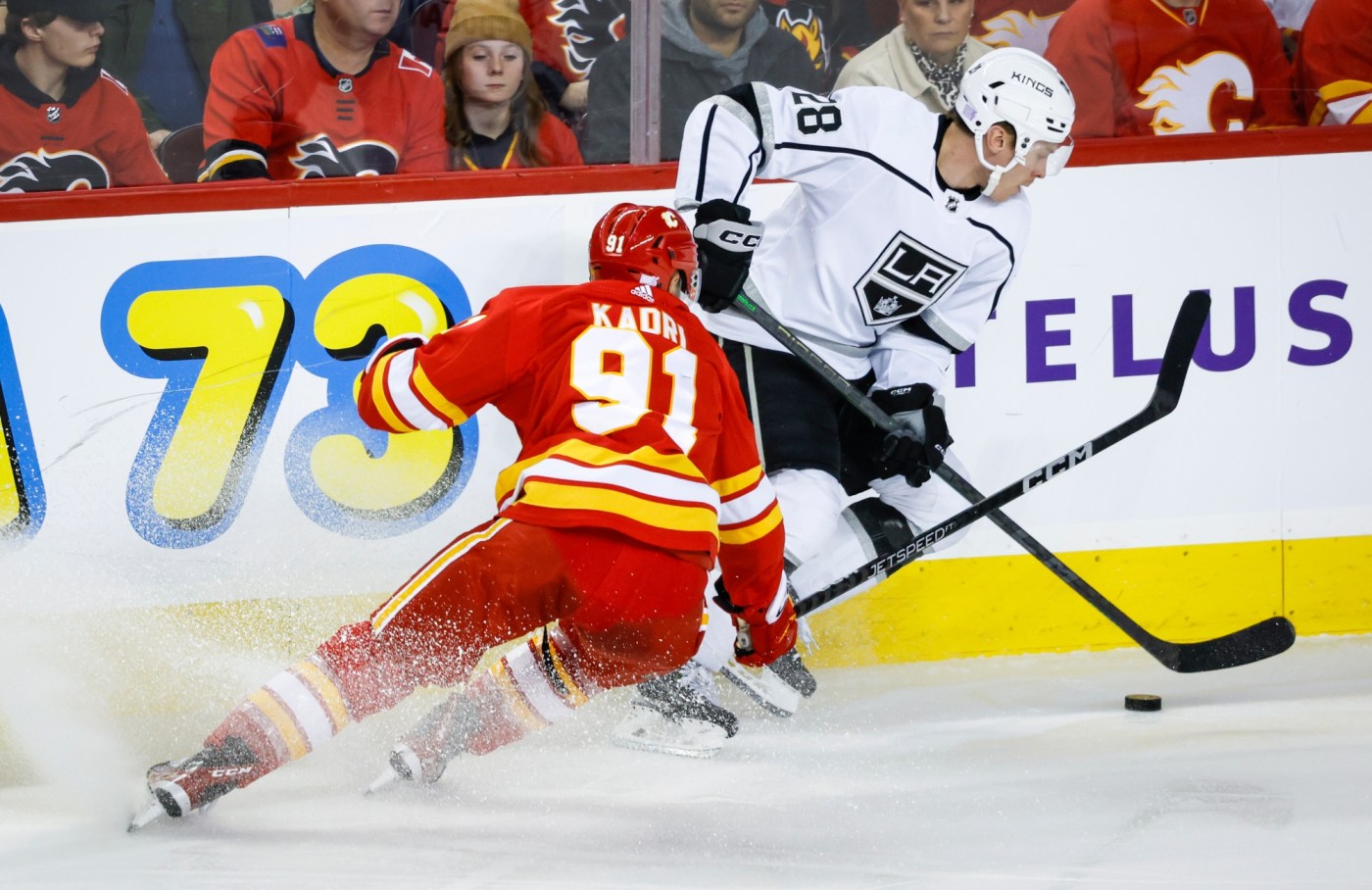 CALGARY, Alberta (AP) — Tyler Toffoli and Elias Lindholm each had a goal and two assists, Adam Ruzicka added a goal and an assist, and the Calgary Flames held on to beat the Los Angeles Kings 6-5 on Monday night.

Arthur Kaliyev scored twice, Kevin Fiala had a goal and an assist, and Adrian Kempe and Anze Kopitar also scored for the Kings, who had won four straight. Drew Doughty had two assists and Jonathan Quick finished with 23 saves.

Markstrom preserved the win with a sprawling save on a shot by Kopitar from 10 feet out with 22 seconds remaining.

Trailing 2-1 midway through the first period, the Flames scored four consecutive goals to pull ahead.

Calgary tied it with 9:05 left after Kadri fired a shot from the right circle that hit Milan Luck in front of Quick. The puck deflected to the left circle and Mangiapane pounced on it, spun and fired a shot past Quick for his third.

Just 42 seconds later, Ritchie forced a turnover in the Kings’ end, passed across to Blake Coleman in the middle, and then got the return pass and put it past Quick on the right side.

Toffoli’s one-timer off a pass from Lindholm made it 4-2 with 3:35 left in the opening period.

Lindholm got the puck from Toffoli and swatted it in on the power play at 1:51 of the second to give the Flames a three-goal lead.

Fiala got Los Angeles back to within two goals with 5:34 left. However, Toffoli and Lindholm combined to set up Ruzicka 2:10 later for his second goal in two games to restore Calgary’s three-goal lead.

Kopitar scored at 8:57 of the third, and Kempe pulled the Kings within one with 1:19 left and Quick pulled for an extra skater. That was as close as Los Angeles could get.

Flames coach Darryl Sutter revamped three of his forward lines with Huberdeau’s return to the lineup after a three-game absence due to an upper-body injury. The changes worked.

With just one goal in his first 11 games, Huberdeau opened the scoring at 3:49, taking a pass from Rasmus Andersson and ripping a shot past Quick.

Kaliyev scored twice in a 1:18 span to give the Kings a 2-1 lead a little more than six minutes in.

Kings: At Edmonton on Wednesday night.