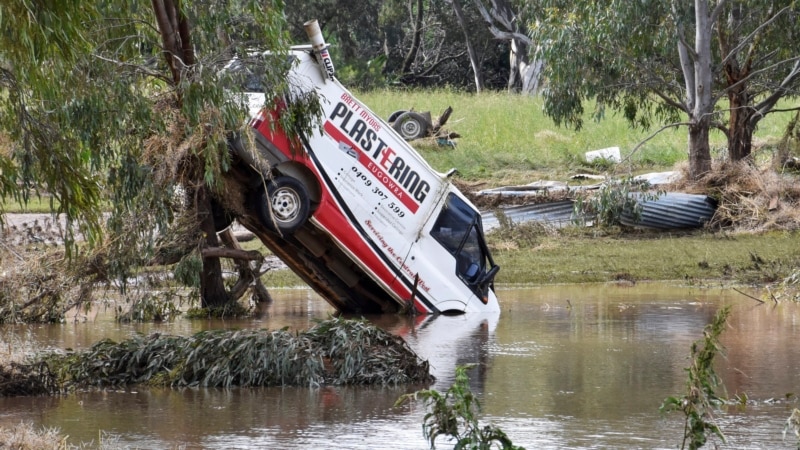 For the first time, emergency services in Australia's most populous state have asked for international help with serious flooding west of Sydney. Hundreds of people have been rescued and evacuation orders imposed. No fatalities have yet been reported. Weeks of record rainfall have caused widespread flooding across parts of eastern Australia. The New South Wales town of Forbes, 400 kilometers west of Sydney, is facing its second flood emergency in two weeks as the nearby Lachlan River continues to rise. An emergency evacuation order was issued to residents Tuesday as the flood waters rose faster than expected. In Eugowra, a woman told local media that her house was swept away by floods while she was still inside. She was rescued by two men after standing on a chair by her window for three hours. Cowra, 300 kilometers west of Sydney, had 121 millimeters of rain from Sunday into Monday, according to the Bureau of Meteorology. The deluge was the town’s highest daily rainfall in 118 years. Several emergency warnings were issued. New South Wales State Premier Dominic Perrottet told reporters in Sydney Tuesday that the crisis is far from over. "There are many difficult days that lie ahead," Perrottet predicted. "Our communities in the Central West have been battered and bruised, and they are in the firing line again. But all hands are on deck, all resources are available to make sure our communities get through this difficult time." Soldiers from the Australian Defense Force, the ADF, are being deployed to help. For the first time, authorities in New South Wales have sought international help during a flood disaster. The state's Emergency Services Commissioner Carlene York told a media conference in Sydney Tuesday that the first contingent of specialists from New Zealand had arrived. "There is one-hundred addition ADF (Australian Defense Force) personnel coming in to assist us today on the ground and we have had 12 personnel from New Zealand fire and emergency services come and help us," she said. She added that, "We are looking at longer term the resourcing to make sure that we can meet those community needs." Twenty-four schools remain closed in South Australia after severe weather over the weekend. Authorities reported more than 400,000 lighting strikes during the storms, which left tens of thousands of homes without power. Climate experts believe the La Niña and the Indian Ocean Dipole climatic systems are fueling the flooding. The phenomena are influenced by warmer ocean temperatures and have dumped above-average rainfall across much of Australia. They both occur naturally but scientists have said they are being super-charged by climate change. More heavy rain is forecast in New South Wales later this week.

Tyler Adams believes anything can happen for US in World Cup

Where to find Japan vs. Spain on US TV

Today24.pro
I make $1,000 a month by promoting Amazon products on social media. It only takes 5 hours per week — here's how I set up my side hustle. RoboCV: stacker robot One of The Greatest Britons in History - Joe Calzaghe LAMB BUTTER Will Melt in Your Mouth! Ancient Food on the Silk Road!