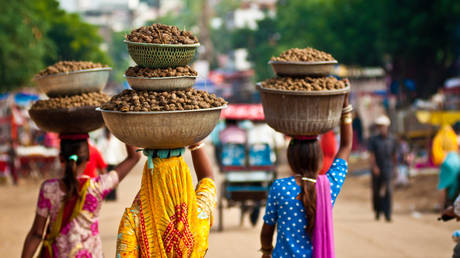 India's consumer-price index for October rose 6.77% from the same month a year ago, compared with 7.4% in September, according to data released by the Ministry of Statistics & Programme Implementation on Monday.

The positive results aren’t enough to force the Reserve bank of India (RBI) to consider pausing interest-rate increases just yet, as the figure has still remained above the regulator’s tolerance band of 2-6% for the tenth month in row.

Non-food, non-oil core inflation, which act as a key factor for the country’s rate setters, came in at 6.23%. Prices for clothing and footwear increased by 10.16%, while prices for housing rose 4.58% during the month on a year-on-year basis.

READ MORE: India’s GDP to double over next decade – economist

The regulator has hiked the key interest rate by 190 basis points to 5.90% since May. Economists at Goldman Sachs Group project the benchmark policy rate to grow to 6.75% by February.

The RBI could opt for a 35 basis points rate hike in December, compared to the previous three hikes of 50 basis points each, according to Aditi Nayar, an economist at ICRA, as cited by the agency.