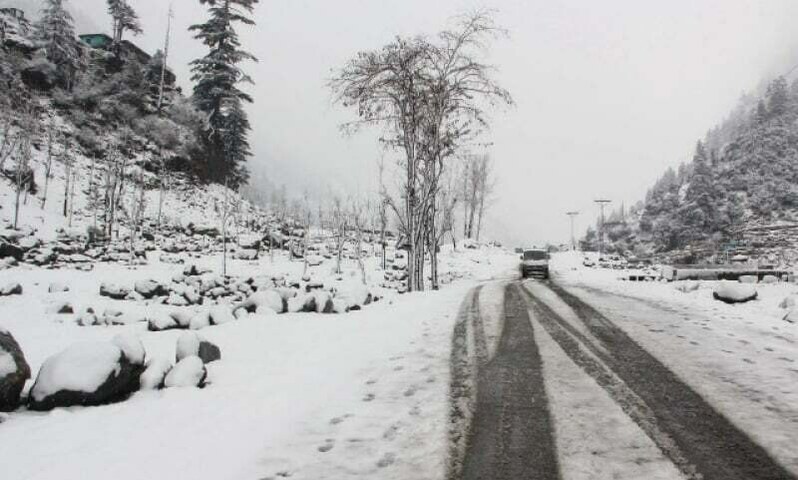 PESHAWAR: Temperatures plummeted in Khyber Pakhtunkhwa on Monday after heavy rains and first snowfall of the winter season.

However, no damage to public life or property was reported.

The rainfall, which began in the provincial capital on Sunday morning, continued throughout the night and next day.

However, cold and dry weather is expected in most districts today (Tuesday).

The tourists said they had showed up to enjoy snowfall, a rarity in their areas.

Iram Rafi of Rawalpindi told Dawn in Malam Jabba that she and other family members had planned the Swat visit in light of snowfall forecast.

“It is always mesmerising to see snowflakes descend calmly,” she said.

The district administration said heavy machinery had been placed on the roads to clear snow.

“The snow clearance exercise in Malam Jabba that began on Sunday night has been completed. The road is clear to traffic,” said deputy commissioner Junaid Khan.

Snowfall was also reported in upper parts of Shangla district on Monday.

Thandiani, Nathiagali, Ayubia, Dongagali, Changlagali and other hilly areas of Abbottabad district recorded the first snowfall of the winter season.

The temperature dropped below the freezing point in Abbottabad and Galiyat due to overnight rain and snowfall with breezy winds.

According to spokesman for the Galiyat Development Authority Ahsan Hameed, snowploughs have been placed in Nathiagali, Dongagali, Changlagali and Barain, while all relevant staff members have been told to remove snow from the main Abbottabad-Murree Road.

Three-four inch snowfall was reported in Changlagali. The administration set up two ‘control rooms’ in Nathiagali and Changlagali for tourist information and assistance.

Rain and snow also fell in upper parts of Hazara division causing cold to sweep through the region.

It began raining on Sunday night in Mansehra, Torghar, Upper and Lower Kohistan and Kolai-Palas districts and continued intermittently all through the day. The snowfall blocked links roads in mountainous areas.

Cold gripped Khyber district, including its Tirah valley, on Monday after the first snowfall of the winter season.

People in most parts of the valley stayed indoors to prevent extreme weather. The Bargh Markaz market wore a deserted look as shoppers stayed away.

Resident Nauroz Khan said the start of the winter season had led to the indoor use of coal-fired traditional steel stoves.

He complained about a hike in gas cylinder prices.

“Those Who Ride The Tiger To Seek Power Often End Up Inside” – Did Nunchucks Arizona Attorney General Mark Brnovich Warn Katie Hobbs During Rigged Election Certification?

VIDEO: Draymond Green Argues Lebron Is The GOAT Over Jordan