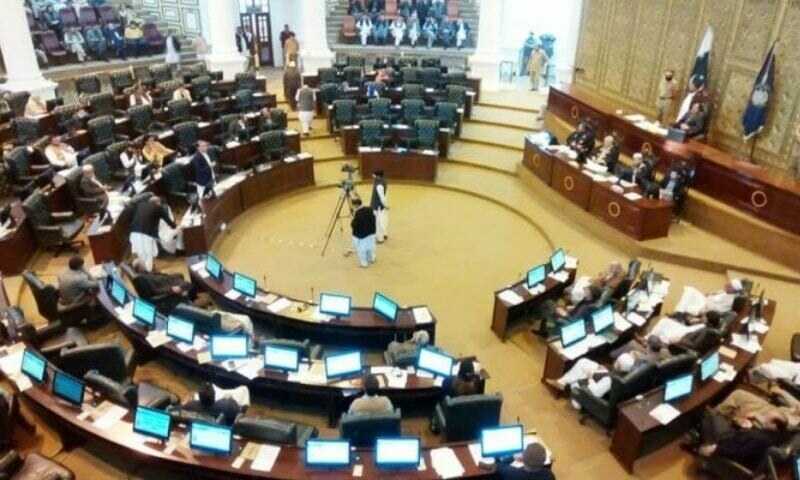 PESHAWAR: An opposition member in the Khyber Pakhtunkhwa Assembly on Monday feared that educational institutions would be converted into barracks for security forces in certain areas of merged tribal districts.

On a supplementary question in the assembly on Monday, Jamiat Ulema-i-Islam-Fazl member from Upper Waziristan tribal district Hafiz Hisamuddin said educational institutions were used as bunkers depriving children of education.

He said degree colleges for boys in Ladha and Saam areas of Upper Waziristan district were understaffed and the government should ensure availability of teachers.

Higher education minister Kamran Khan Bangash while responding to the question said the provincial government had appointed 300 lecturers in colleges in tribal districts under the Accelerated Implementation Programme.

He added that the department was paying Rs80,000 salary to those lecturers.

The minister said his department had taken notice of teacher absenteeism at the Girls College Wana, Lower Waziristan, and the students’ protest about it. He said the department was holding an inquiry into the matter. Mr Bangash said 109 girls had been enrolled in the college, while the teacher strength was nine.

He said for the first time in the country’s history, as many as 35 colleges were made functional in the current year, while 12 colleges became functional last year.

Responding to a question of Awami National Party member Shagufta Malik, the minister said the provincial government was taking measures to eliminate the use of narcotics from educational institutions.

He said the laws were being strictly implemented, while awareness seminars and workshops were being organised for students.

The opposition criticised the KP government for making the province indebted to the tune of Rs1.4 trillion and termed it a violation of the ‘financial rights’ of the people of KP.

During question hour, MPA Ikhtiar Ali of the Pakistan Muslim League Nawaz claimed that the provincial government didn’t have money to pay salary to its employees.

He said the PTI government had ruined the province’s economy.

Parliamentary leader of the Awami National Party Sardar Hussain Babak said the ruling PTI had destroyed the province and ‘handed it over’ to militants.

He said the provincial government had miserably failed to take up the NFC Award issue with the federal government as the award hadn’t been issued for four years.

Mr Babak demanded the formation of a house committee to examine “gas shortages and unavailability, deteriorating law and order situation, increasing inflation, and high unemployment rates in the province.”

Referring to the law and order situation in the province, the ANP leader said people had been left with no option but stage street protests to demand peace in their areas.

The opposition lawmaker also complained about the increasing inflation and unemployment rates in the province and said the provincial government was using power against peaceful protesters over injustices against them.

Khushdil Khan of the ANP suggested that the finance department brief the house on the financial situation of the province and once that happens, the opposition would support the government to claim the rights of the province.

Responding to the opposition’s remarks, labour minister Shaukat Yousafzai alleged that the federal government was looking for an excuse to impose the Governor’s Rule in KP to divert people’s attention.

He said the ruling PTI would ‘go for’ fresh general elections instead of the Governor’s Rule. The minister said the PTI chief received four bullet injuries for the sake of the people and was ready to render more sacrifices for the country.

“During PM Imran Khan’s government, Rs68 billion was received by the province from the centre in terms of electricity net profit,” he said.

The minister criticised the federal government saying the inflation rate has surged to 56 per cent, while the dollar has become stronger against Pakistani rupee.

The chair, Idrees Khattak from the panel of chairmen, adjourned the preceding until Dec 5 due to a lack of quorum.

Today24.pro
AMSTERDAM Walking tour and city highlights in 4K English Teacher Grades Homework By ChatGPT WIRED I've had this for a week, and it makes me feel better The Ultimate SAUDI ARABIAN FOOD Tour in Riyadh! 5 Best Restaurants You Can't Miss!