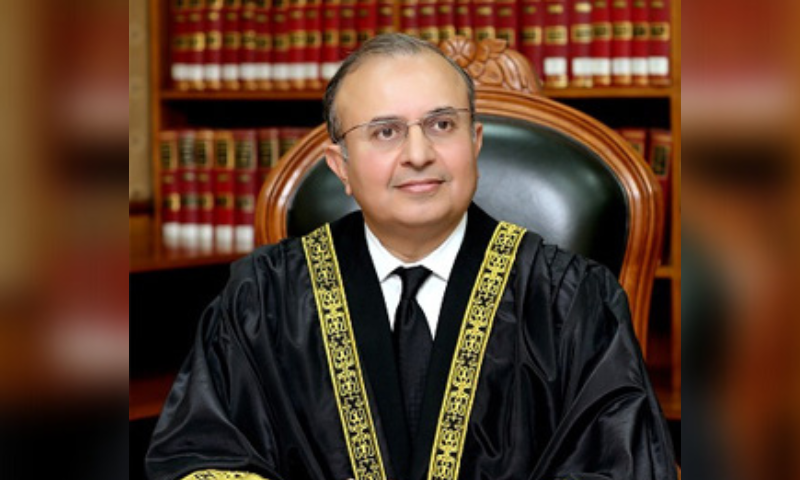 ISLAMABAD: Justice Syed Mansoor Ali Shah on Monday wondered if three judges can look at the validity of a law in light of fundamental rights, which has been debated and approved by a house representing 238 million people of the country.

“We have to be careful since parliament represents 238 million people. Can the three of us look at the validity of the law on the touchstone of the fundamental rights, which was debated and passed by the house?” observed Justice Shah, one of the members of a three-judge Supreme Court bench that had taken up a challenge to the amendments to the National Accountability Ordinance (NAO) by former prime minister Imran Khan.

Another member, Justice Ijazul Ahsan, however emphasised that there should be some strong compelling reasons to amend the law since diluting it amounted to legitimising and condoning corruption by looking the other way.

He also wondered if citizens could be discouraged from coming forward to question weak laws on corruption. “I find these amendments in the NAB law essentially saying that we will look the other way and let the corrupt enjoy the right to do more corruption since these laws have become so lenient that it has made the trial of the delinquent impossible,” he regretted.

However, Justice Shah reminded that the Constitution had set the standards, also wondering if they as judges were in the business of resetting these standards over and above the fundamental rights when it was the business of parliament.

The maximum they could do, Justice Shah observed, was to ask parliament to reconsider what it had already designed, adding at the end the law had to be made by parliament.

When senior counsel Khawaja Haris Ahmed, while representing the petitioner Mr Khan, argued that amendments to the NAO had allowed public office holders to go home and enjoy life without any fear of being prosecuted for committing corruption, Justice Shah reminded him there were people who had gone home even after abrogating the Constitution.

“One can say the law is deficient and should be improved by parliament revisiting it, but to strike down the amendment is going too far,” Justice Shah observed.

The counsel however emphasized that if this wasn’t done, it would amount to condoning corruption. Being the trustees of properties and assets of the country, people had the right to hold public office holders responsible for corruption.

Justice Shah emphasized that what the counsel was arguing was all hypothetical since the ones he was talking about had not been convicted of corruption, their trial was under way and the prosecution had to prove its case.

But the counsel argued that these people would never be tried rather would eventually be acquitted because of the weak law. He reminded that in the absence of a law the apex court had previously asked successive governments to develop the same.

Justice Shah however emphasized that if the court accepted the counsel’s argument then it would mean vesting the citizens with the fundamental right to challenge all policy decisions.

He observed it would amount to opening a Pandora’s box since the citizens would even question budgets on the plea that no allocation had been made for development of roads in their constituencies.

The counsel however emphasized that once someone became unaccountable for corruption, it affected the fundamental rights of people, adding people had the right to hold public office holders accountable if the properties, money or assets of the state, which belonged to the people, were plundered.

Who is Michael Emmett?

A 24-year-old says she 'ignored' her bloating and stomach pain until it got so bad she went to the ER. Doctors diagnosed her with ovarian cancer.