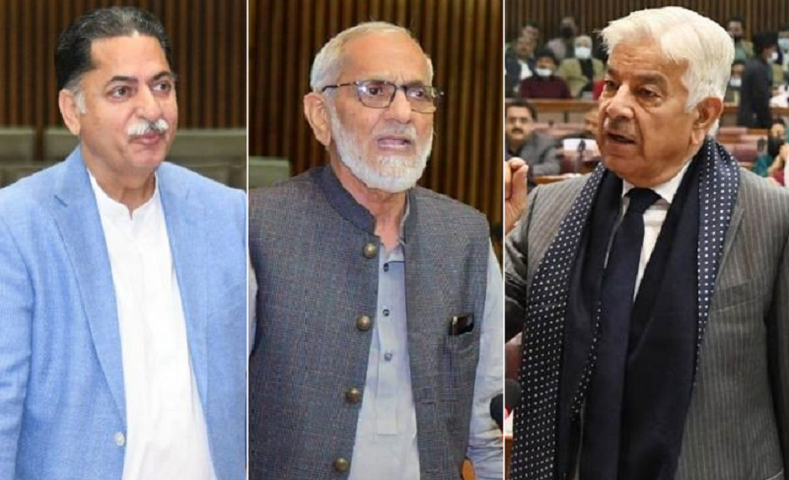 • Khawaja Asif says PTI chief can’t be allowed to go scot-free, will have to suffer consequences as per law
• Claims Imran has made army chief’s appointment ‘street gossip’ through public addresses

ISLAMABAD: Treasury members, including two federal ministers, lambasted Pak­istan Tehreek-i-Insaf (PTI) Chairman Imran Khan in the National Assem­bly on Monday for “taking a U-turn on the cipher issue”, declaring that the ex-premier would have to pay a “political price” for his “lies and false narrative” regarding the US-backed regime change conspiracy.

The government members, in their lengthy and one-sided speeches on points of order during the lacklustre proceedings, also criticised the PTI chief for making the army chief’s appointment ‘controversial’ and ‘street gossip’ through his public addresses.

“No, it’s not all over. The time has come to grab you from the collar… you will have to pay the political price for playing with the honour and prestige of the nation,” said Defence Minister Khawaja Asif while addressing Mr Khan after taking the floor of the assembly on a point of order when the house met after a two-day recess.

The outburst came a day after Mr Khan’s interview was published in the British newspaper, Financial Times, in which he had reportedly stated he no longer “blames” the US administration for his removal from power in April and that he wanted a “dignified” relationship between Washington and Islamabad.

“As far as I’m concerned, it is over, it’s behind me,” the newspaper had quoted Mr Khan’s comments on the US role in the alleged conspiracy.

The ex-premier’s remarks came as a surprise, as Mr Khan has been campaigning against the alleged US conspiracy since his ouster from power.

He lent strength to his narrative by referring to a cipher that the then Pakistan’s ambassador to the US had sent to Foreign Office after a meeting with Assistant Secretary of State Donald Lu.

The defence minister said: “He [Imran] should not be allowed to get off scot-free. He will have to pay the price as per the Constitution and law.”

He added, “You cannot simply run away by giving an interview to a British newspaper and by starting efforts to mend relations with the US through appea­sement.”

He alleged Mr Khan had hired someone on $25,000 salary for lobbying in the US on his behalf. However, the minister alleged, Mr Khan “buried” his narrative of “imported government” on the basis of which he had been running a protest campaign and holding a long march.

The minister recalled that the PTI chief through his allegations against the US had “embarrassed” the entire country and then he wanted the nation to forget that narrative that damaged Pakistan’s foreign relations.

Known for taking U-turns, Mr Khan did not stand by his words for more than a few months or weeks, Mr Asif said, terming the PTI chief’s latest statement a “warning for the whole society”, particularly those who still had trust “in this fraudster”.

While criticising Mr Khan for alleged political victimisation of his opponents during the PTI government, he said the PTI chief used to give direct orders to the director general of Inter-Service Intelligence (ISI) to put his opponents behind bars.

Mr Latif accused Mr Khan of making the army chief’s appointment controversial, something that he said had never happened in the country’s 75-year history.

He also expressed his surprise over another reported statement of Mr Khan that Pakistan’s defence institutions were not independent. He insisted the house must take serious notice of such statements, reminding the house that Pakistan was a nuclear state.

“When he [Imran] was in power, he used to say that they are on the same page,” he said, adding that at that time Mr Khan was getting support from the agencies even during the votes on crucial legislation.

He alleged Mr Khan used to blackmail the institutions, including National Accountability Bureau, when he was in power.

“He [Imran] is using the same political gimmicks, when he is no more in the government, by holding rallies and sit-ins across the country,” he added.

The minister, who holds no portfolio, then wondered why the federal government was not taking any action against the PTI chief despite the fact that the “institution [army]” had itself asked it to take legal action against him for defaming the institutions through false accusations.

“Why are the hands of the federal government tied? One man is continuously speaking and he should be stopped,” Mr Latif said, warning that Mr Khan would further tarnish the image of Pakistan at the international level if he was not held accountable.

PML-N MNAs Chaudhry Faqir Ahmed from Vehari and Qaiser Sheikh from Chiniot also criticised their own government for not taking any action against Mr Khan, warning that the PTI chief would continue to damage the country economically if he was not stopped from doing ‘politics of agitation’.

Today24.pro
RoboCV: stacker robot Billionaire investor Howard Marks touts a bargain boom as interest-rate fears grip markets - and predicts a surge in companies going bankrupt LAMB BUTTER Will Melt in Your Mouth! Ancient Food on the Silk Road! I make $1,000 a month by promoting Amazon products on social media. It only takes 5 hours per week — here's how I set up my side hustle.